This fun take on the Pixar movie has lots of entertaining content for younger players, but control issues and a lack of depth limit its appeal.

Pixar's films touch on themes so universal and immediate that it is possible for both adults and children to be sucked into their imaginative worlds. Unfortunately, most of the games based on these popular properties have been unable to replicate this appeal, veering too far to the simple side of things to give veteran players a worthwhile experience. Toy Story 3 does little to buck this trend, but it does a fine job of providing an entertaining and varied experience for younger players eager to spend more time with their favorite characters. The vast array of different activities ensures there is always something new to conquer, and the wealth of missions keeps the good times flowing for many hours. The troublesome controls during certain segments get in the way of the carefree fun, but the colorful visuals and bountiful rewards make this an easy game to stick with.

Toy Story 3 doesn't rigidly follow the narrative of the movie. Rather, the story portion is a virtual tour of many of the set pieces found in the upcoming movie and the overarching fiction. There is still a story tying all of these events together, but it mostly exists to provide the occasional chuckle. While that may be disappointing for anyone eager to play through the silver-screen adventure, what this approach offers is a varied experience that deftly introduces new gameplay mechanics in every stage. The core of Toy Story 3 is platforming, but there is a lot more to do than just run and jump. Buzz Lightyear leaps between crumbling asteroids in outer space while shooting down robots with his laser; Woody chases down a train while riding his trusty steed, Bullseye; and Jessie helps free Hamm from a garbage conveyor belt. Not all of the levels are quite so fun, though. A nighttime escape from a daycare center focuses on stealthily slinking past a roving patrol of light-bearing toys, but being spotted and having to restart because the controls and camera wouldn't cooperate is aggravating. However, even with the occasional stumble, the variety keeps things fresh throughout.

Unfortunately, there may be a bit too much variety, because none of the sections are particularly refined. Controls are a problem throughout the entire game, and though they never keep you from advancing, they will lead to your failure more than a few times. Context-sensitive commands are the biggest offenders. You can push a button to initiate a lasso move as Woody when you're close to specific objects, but it doesn't always work when you need it to, which can be maddening when you fall off a platform and have to start a sequence all over again. Characters also don't always latch on to ledges or perform wall-jumps when they should, and your auto-aim frequently locks on to the wrong targets. Vehicles are also troublesome. Cars handle way too loosely, making it easy to spin the wrong way or land on the roof like a turtle stuck on its back. These quirks crop up sporadically throughout the adventure and lead to a number of frustrating moments.

The eight levels of the story take only a few hours to play through, but there is a lot more content in the Toy Box mode. This is an open-world adventure that allows you to take on missions from various characters and customize a town to your liking. Missions have you doing all sorts of different activities: tossing farm animals down a well to earn a special gold star; throwing dynamite at a mountain to carve your favorite characters' faces in the rock; or chucking army men off of roofs to get them to parachute onto a target. There are races to take part in (of both the car and the horse variety), still pictures to re-create, and mayoral elections to rig. These bite-size challenges can be completed in just a few minutes, letting you quickly move on to a new activity if you aren't having much fun capturing criminals or rescuing aliens. None of these activities are deep, but there are so many on offer that it's easy to lose hours trying to make every citizen happy.

As you complete these various goals, you earn money to unlock new buildings, citizens, and tools. The buildings each have their own uses, so once you erect a jail you have a place to lock up pesky criminals, and the tailor's shop is a fine place to give your alien friend some new clothes. Customization tools are not just limited to what you would find in the Toy Story movies, either. You can dress your people up as Wall-E or put Nemo fins on the sides of your buildings if the desert theme seems a bit dry. Being able to color your citizens and buildings however you like lets you inject a bit of your own personality into the game, but that's sadly as far as the customization options go. You can't actually set up your own obstacle course or race track, so it's just a matter of unlocking everything you can instead of crafting your own. Still, there is a lot of content here, and it's easy to get sucked into completing missions and buying new toys.

The impressive number of unlockable goodies gives this game a lot of replay value. Every level from the story mode contains hidden items, and you will most likely need to visit stages a few times to find everything there is. Toy Box mode has extra outfits and bonus characters strewn about the large map, giving you a worthwhile reason to get off the beaten path to find those lost items. There is a two-player mode as well that lets another player hop in at any time. The split-screen action can make fast-paced race sequences a little more difficult to complete, but exploration with a friend by your side is even more fun than going through the game alone.

Toy Story 3 may not be able to reach the lofty heights of Pixar's movies, but it is a fun game for youngsters who want to play around in this colorful world. The variety of activities ensures there is something new to see in every level, and though none of the missions are deep, they do offer plenty of simple fun. Control issues lead to a number of unavoidable deaths, but the forgiving checkpoint ensures that you won't have to backtrack much if you end up in a bottomless pit. Toy Story 3 has a lot of content and provides a good time for players eager to spend a few more hours with Woody and Buzz. 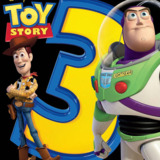