This beautifully presented WWI-themed tower defense game will have you coming back again and again.

When you hear the name Toy Soldiers, it might conjure images of the diminutive green army that emerges from a bucket in Toy Story or perhaps remind you of Martika's '80s hit of the same name. Unsurprisingly, the stars of this tower defense game have more in common with the former than with the latter, but they're not risking their green-and-tan bodies in assaults on armchairs or in the defense of dining tables. Rather, they're playing out scenarios from the First World War on battlefields that, though small enough to be towered over by desktop lamps, look a lot like the real thing. When you're not busily arranging defensive gun emplacements and the like on these dioramas, you're free to commandeer them, along with any tanks, planes, and sniper towers that you find. This makes Toy Soldiers an especially engaging entry in the tower defense genre because you have more to do than watch your defenses at work. It's also a lot of fun, and great value at 1200 Microsoft points (US$15) because it offers a Survival mode, as well as competitive multiplayer in addition to two decent-sized campaigns.

Your goal in Toy Soldiers is always the same: Protect the toy box representing your base that sits conspicuously on the battlefield. Suitable build points for defenses are arranged close by and, occasionally, across the entire battlefield. They come in two sizes: Small build points are suitable for anti-infantry guns, chemical weapons, and mortars, while large build points can accommodate antiair guns and long-range cannons. The victory condition for campaign missions is that no more than 20 enemies can reach your base, and unlike their counterparts in other tower defense games, enemies don't all follow the same route--even if their movements are still tightly scripted. Infantry, cavalry, armored cars, tanks, fighter planes, and bombers all pose different challenges, and keeping an eye on the enemy's unit queue to see what two or three types are coming next is key.

As you start each mission, the limited resources at your disposal are rarely enough to build more than a few defenses, but you earn money for every enemy that falls so it's not long before you can put all of the build locations to good use. Money is also used to repair and upgrade defenses, though you only gain access to upgrades as you progress through the campaign. And that's just as well, because while the simple controls make all of the build and upgrade options easily accessible, it takes a while to figure out which defenses are the most effective in which situations. A level-three weapon isn't always preferable to a level-two one, and you can often get by with lower level defenses if you're manning them yourself. You can hop onto defensive turrets at anytime, and using them is as easy as pointing them in the right direction and squeezing the trigger button. When they're available, vehicles work in much the same way, though it's worth noting that any vehicle that you leave unattended for too long or which gets destroyed takes a minute or so to become available again.

A good understanding of how all of your defensive options work is especially important in missions that end with a boss fight. Bosses include giant tanks, zeppelins, and trains, and although the same bosses appear in both of the campaigns, your fights with them play out quite differently. Even more so than regular missions, the boss levels often require some trial and error to beat. You need to memorize the boss's movements and position your defenses accordingly. Sometimes you have to tear down one defense to replace it with another in the middle of a fight just so that you have a weapon with the correct range, or manually reposition an existing defense so that it's pointing in the right direction when the boss moves. It can be frustrating to replay the same level over and over again, but every failed attempt makes you better prepared for the next, and because you do a little better each time, you're less inclined to give up.

Upon beating the Allies' 12-mission campaign, you unlock the Campaign+ mode that is played from the perspective of the Central Powers. The bosses and maps are largely unchanged, but the missions play out quite differently because you're up against more challenging enemies. In some cases, the remixed missions are also played at nighttime, which limits your visibility. Even more challenging is the elite difficulty setting that's available for any mission you've beaten previously. Unlike the other three difficulty options, which do exactly what you'd expect, cranking the game up to elite changes the gameplay quite considerably because your defenses no longer fire on anything automatically. You have to take control of every position manually, which makes for a much more frantic experience. The similarly challenging Survival mode also changes up the gameplay, sending in wave after wave of enemies onboard an armored train until your base inevitably falls. Neither of these modes is as much fun as regular campaign play, but they're welcome additions because they add some variety and offer a lasting challenge.

In addition to all of that single-player content, Toy Soldiers supports competitive two-player matches both online and via split-screen. In these games, you have control of your offense, as well as your defense; choosing which units to send into battle alongside the infantry that is handled automatically. You simply push Y to bring up your offensive menu, choose which of the three different unit types you want to send in, and then they appear on the map about a minute later. Multiplayer maps are symmetrical, so both players have a base to defend and have the same build points to work with. When they're closely contested, multiplayer battles are even more fun than the Campaign missions. That's not always the case, though, because once a player gets the upper hand, it can be extremely difficult for the other to get back into the fight. The most obvious multiplayer flaw, though, is that tanks and planes are overpowered--the former because they can easily be used to destroy defenses from great range; the latter because it's possible to fly them straight into the enemy's base so quickly that antiair guns don't stand a chance.

Multiplayer is also held back from greatness by a lack of content. There are only five maps available, and custom game options that let you determine which units are available, how much cash each player starts with, and that sort of thing are only available when you play against friends. If none of your friends want to play, your only option is to jump into a ranked match on a random map against a random opponent. Drivable tanks and planes, which can be turned off in friendly games, are always enabled in ranked battles, and too often, it's these vehicles that determine the winner. They're often a necessary evil, though, because they prevent games from turning into lengthy stalemates.

Other than some occasional drops in the frame rate when playing online, the presentation is uniformly impressive in Toy Soldiers. Units are detailed enough that they hold up to close scrutiny, and if it weren't for the clockwork keys sticking out of tanks and the small cogs that fall to the ground when soldiers are killed, you could easily mistake this for an attempt at realistically re-creating the Great War. The battlegrounds, which offer plenty of variety, also have a believable appearance--at least until you realize that the horizon looks like it's hand painted onto the inside of a box. Occasionally, you're afforded a blurry look at the real world beyond the confines of the battlefield diorama as well, which serves as a sometimes-needed reminder that you're playing with toys.

Despite its limited multiplayer offering, Toy Soldiers is a great game that you can easily sink a dozen or more hours into without feeling like you've seen everything it has to offer. You might keep playing because you're competing with friends on the online leaderboards for each level or, perhaps, because you want to unlock a Pickelhaube reward for your avatar. Mostly, though, you'll keep coming back to Toy Soldiers because there's plenty of fun to be had with it even after you've beaten every mission and won a multiplayer battle on every map. 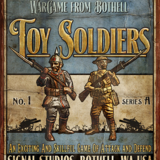