It's been the better part of a decade since the original Gran Turismo redefined racing on consoles, but Polyphony Digital has finally moved into the realm of two-wheeled racing with Tourist Trophy. The game maintains the compulsive drive for authenticity that the Gran Turismo series is known for, but with a much narrower focus. So while it may just be Gran Turismo with motorcycles, it's still a great racing game in its own right.

There are more than 120 motorcycles to ride in Tourist Trophy. The selection of bikes is very Japan-centric, with Hondas, Yamahas, and Suzukis making up the vast majority of the roster. There are a few bikes from BMW, Ducati, and Triumph as well, but the selection is limited in that regard. The motorcycles range from lightweight 125cc two-strokes to heavy 1,000cc-plus bikes. The variety is somewhat limited by the fact that you'll often see multiple versions of the same model of bike.

Regardless of how similar the bikes may be, they all have a distinct look, sound, and feel. The detail on the bikes matches what you've come to expect from Polyphony Digital, with everything from the gas tank to the oil pan being accurately detailed for each and every motorcycle. The only fault is that the over-the-handlebars view is pretty ugly. Each bike has a distinct display in this view, but the handlebars and rearview mirrors have a blurry, pasted-on look. All in all, though, the game looks great, and if you're a motorcycle enthusiast, you'll enjoy watching the replays of the races almost as much as you'll enjoy racing.

The bikes in Tourist Trophy are just as satisfying to ride as they are to look at. Each motorcycle handles differently, requiring you to adjust your riding style depending on the bike you're riding. The heavy bikes are great for speed but can be tough to stay on top of in tight turns. The lighter bikes are quick and nimble but don't have the power to keep up in the straight sections. Everything from the way a bike starts to shake as you hit speeds of 200 miles per hour or more to the sound of wind rushing past your helmet as you top out in a straightaway makes you feel like you're teetering between a record-setting lap and a pelvis-shattering spill across the pavement. However, the crashes are the weakest part of the riding experience. In a standard race, if you really mess up and smash straight into a wall, you'll be slapped with a 10-second penalty, but most of the time when you take a spill you'll be instantly placed back on the track, sometimes even ahead of where you wiped out. You might lose a second or two as you get back up to speed, but it hardly seems like much of a penalty for a crash that would seemingly cost you the race, if not more.

Tourist Trophy is composed of two main modes: arcade and Tourist Trophy. Arcade mode is the place to go if you're just looking for a timed run, a quick race against up to three computer-controlled opponents, or a two-player split-screen race. Tourist Trophy mode is the equivalent of a career mode, where you start out by earning a license and then work your way through various racing events and challenges to access new bikes and more challenges. It's similar to Gran Turismo mode in concept, but with some significant differences.

For one, there's no money in Tourist Trophy mode. You earn new bikes not by amassing wealth, but by winning challenges and race events. There are dozens of challenges to choose from, but they are locked according to the licenses you've completed. The license tests are extremely easy, though, so you might as well finish them all first thing to get them out of the way. Each challenge corresponds to a specific motorcycle, which you win by completing that challenge. The challenges are all pretty much the same, requiring you to overtake an opponent after starting at a disadvantage and then maintain the lead for 10 seconds or cross the finish line, whichever comes first. Some of the challenges can be completed in less than 30 seconds, but others can be quite difficult, especially because you're disqualified if you leave the track, wreck, or cause your opponents to wreck. Since these challenges are all available as soon as you complete the license tests, you can conceivably pack your garage with a couple of dozen bikes after just a few hours of playing.

The best bikes are awarded for completing race events. There are 22 race events to start out with, but you can unlock several more by winning championship events. The events are all themed, and most are restricted to specific types of bikes. There are events designed around specific bike models, eras, and sizes. Most of the events are single, three-lap races where you're awarded for each individual race. There are also a handful of championship events where points are awarded for each race and the person with the most points at the end of the series is the champion. Most of the events aren't punishingly difficult, and they're short enough that they can be completed (or repeated, if necessary) relatively quickly.

The second major difference between Tourist Trophy and Gran Turismo is in the vehicle customization. In Tourist Trophy you can tune your motorcycles by adjusting the gear ratio, brakes, shocks, tire compound, and exhaust. But the tuning is extremely basic and is nowhere near as involved as in Gran Turismo. With that said, the tuning does make a big difference in how each bike handles, so it still pays to tweak your bike settings before each race. There are also no part upgrades in Tourist Trophy, so if your bike is underpowered, it will stay that way. All in all, the bike customization leaves a lot to be desired in Tourist Trophy.

Oddly enough, the rider customization is surprisingly robust. You can win all sorts of licensed riding gear from manufacturers such as Alpine Star, Shoei, and Arai. You can also customize your riding style to suit your needs. You can adjust everything from head roll to body lean, and the riding style you choose can make a big difference in how you're able to handle turns.

You'll see quite a variety of turns as well. Some are fast and exhilarating, while others demand hard braking and precise timing. There are more than 30 courses in all, although some of those courses are simply alternate arrangements of the same race track. The courses all look great, and there's plenty of variety to challenge every facet of your racing skills. The only problem is that all but one of the courses are recycled from the Gran Turismo games, so it will feel like well-worn territory if you've played those games. It's still a very different experience on two wheels, though, and all the courses feel well suited to motorcycle racing.

In fact, the challenge comes almost entirely from the course, rather than from the competition. The artificial intelligence in the game is very mechanical. The opponents you face will occasionally take corners a bit slower than necessary, but you'll almost never see them take a corner wide and dump their bikes in the gravel or oversteer and take a spill coming out of a turn. The result is a race that feels more like a time trial than a heated sprint for the finish line. The biggest component of victory is the bike you choose to ride. If you're on an underpowered bike, you won't stand much of a chance of catching up, no matter how good you are. But, if you have a fast bike, you can easily compensate for sloppy cornering with quick acceleration and a high top speed.

Tourist Trophy feels very familiar, but at the same time it doesn't just feel like motorcycles were forced into a Gran Turismo game. The motorcycles all look and handle great, and there are plenty of events, challenges, and courses to keep you coming back for more. If you're even slightly interested in the world of motorcycles, you'll find a lot to enjoy in Tourist Trophy. 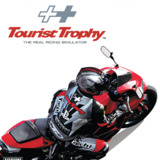