Toukiden 2 is an exciting beast hunting game that understands the importance of storytelling.

With the global popularity of the Monster Hunter series on the rise, several developers have attempted to put their own spin on the “team of warriors working together to take down a giant beast” concept. While some players might simply dismiss any game besides Monster Hunter as a knock-off, many games inspired by that series are valuable in their own right because they introduce and iterate on the formula in meaningful ways. Toukiden 2 is one such game, taking genre foundations and building upon them to form an identity all its own.

The game doesn’t waste any time before thrusting you into demon-crunching action; the very first scene puts you in the middle of a battle in Yokohama in an alternate-history version of Japan. Wicked demons known as the Oni are flooding through an interdimensional portal, and it’s up to you to destroy them before they finish wreaking havoc on Earth. This scene serves as a tutorial, introducing you to the basics of fighting: attacking with your chosen weapon, targeting (and cutting off) body parts of larger enemies, and purifying the remains of the fallen demons. Unfortunately, things don’t turn out so well in the end, and you wake up on the other end of the country 10 years later. You’re rescued by a professor and her strange mechanical companion who, along with various warrior factions of the local village, are working to help stem the tide of the Oni scourge.

One of the big things that sets Toukiden 2 apart from its peers is its ongoing story. New locations, characters, and plot elements frequently appear as you progress through your objectives. Framing the narrative is a semi-open world where you can fight monsters, find extra side quests, gather materials, and locate collectibles like ancient pillars that provide insight into the game’s backstory. Having this sort of freedom in a hunting game feels fresh and makes the world itself more engaging. But if you want traditional mission-based quests from a hub area, those are available as well.

Toukiden 2 is not totally open world at the start, however. Some locations are locked until later in the story, and some areas are infected by an evil miasma emitted by the Oni. The longer you stay in an afflicted area, the more impure your body becomes. Fail to purify yourself and it’s game over. It’s a harsh system, but there are ways to get that nasty air out of your body: you can use cleansing stones located around the world and back in town, or kill and purify a lot of demons. This system adds a nice balance of danger to exploration and adds to the overall atmosphere of the game by showing you directly how the Oni are corrupting the world.

Special praise must be given to the variety of Toukiden 2's monsters. The Oni you fight have a distinct look that falls somewhere between Japanese yokai and modern game creature design. Onis can present fast-paced one-on-one fights or lengthy, hard-fought battles that require a group strategy. Demons don’t go down easily--you’ll need to first get them to reveal their hidden life force by attacking and eventually severing specific body parts. Then you can lay into a weakened Oni with attacks and special skills to finish the job.

A crucial weapon in your fight against the Oni is the “Demon Hand,” a special piece of gear given to you by the professor. This acts like a sort of grappling hook, allowing you to perform an array of flashy attacks and maneuvers. For starters, you can latch onto enemies and objects in the environment and slingshot over to them, launching a sweet aerial attack along the way. You can also grab elemental sources and certain objects in the environment, flinging them at foes or using them to augment your weapon. Finally, you can use the Demon Hand to launch special unity attacks when your team’s unity gauge is full, tearing off certain body parts and making it extra hard for the Oni you’re fighting to regenerate. It definitely takes some getting used to, but few things are more satisfying than summoning a gargantuan supernatural hand to rend the weakened limbs from giant enemies.

Wandering through the world can be very frustrating at times due to the lack of detail on your map, repetitive environments, and a lackluster guidance system.

While you’ve got a diverse array of weapons (each with differing play styles) to choose from, Toukiden 2 also offers an interesting way to customize your warrior in the mitama. Mitama represent souls of historical and mythological Japanese figures that have been devoured by the Oni, and by freeing them, you can make use of their powers. Some mitama are earned over the course of playing the game normally, while others are random drops from slain Oni or quest rewards. You can equip them in offensive, defensive, or support roles, and depending upon where you put them, they offer various boosts and special effects.

The mitama in the attack role is the most vital since they give you a set of active skills to utilize in combat, but other mitama offer handy abilities that trigger when conditions are met (for example, when you’re hit with a status ailment). In addition, the boosts they provide can be leveled up, giving you numerous passive buffs that improve the more you fight with them. Finally, mitama abilities can be boosted if they’re equipped in certain combinations--for example, using a set of mitama from the same historical period or finding mitama whose lives were connected to each other in some way (so brush up on those Japanese history books). Collecting, levelling, and creating ideal sets of mitama is one of the big draws that keeps you coming back to the game. It can be a bit grindy, but thankfully, there are drop- and experience-boosting items you can buy in-game to make the process faster and easier.

While Toukiden 2 introduces a lot of valuable ideas, it's not without its flaws. Wandering through the world can be very frustrating at times due to the lack of detail on your map, repetitive environments, and a lackluster guidance system that will indicate where you need to go but not the often-roundabout route to get there. Areas that have stronger miasma concentration compound these issues, as they cause your corruption meter to increase many times faster than usual. There’s no indication that you’re entering one of these areas, so it’s not uncommon to take a peek at your miasma corruption mid-exploration and see that, whoops, it’s suddenly going up really fast--and also, you’re almost dead.

Toukiden 2 also neglects to explain its nuances. There’s an in-game guide you can reference that covers many topics, though it never feels like it describes things well. This extends to the multiplayer mode, which doesn’t explain how joining sessions and embarking on missions works--it just assumes you’ve played other hunting games and know the drill.

Fortunately, once you know what you’re doing, multiplayer becomes one of the highlights of the game, offering smooth, fun Oni fights with up to three other players. While you can’t do the story mode as a co-op event, the multitude of missions that are available offer up plenty of challenging quests that reward teammates for working well together to accomplish their objective.

What seems at first glance like a fairly standard genre game, Toukiden 2 ultimately offers an interesting setting, imaginative creature designs, story- and exploration-driven gameplay, and unique combat elements. While its flaws are obvious, it’s not hard to forgive them when you’re in the heat of battle, chopping off a hellish spider-demon’s legs one by one and watching its life force disappear with every slash, shot, and punch. 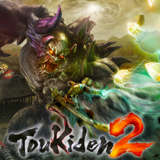 Heidi didn't play the first Toukiden, but she came away quite satisfied with its sequel. She played through Chapter 6, finished a few quests in Chapter 7, and spent a good deal of time joining and hosting multiplayer games. Maybe you ran into her if you saw a hyper-aggressive gauntlet user. GameSpot was provided with a complimentary copy of the game for the purposes of this review. 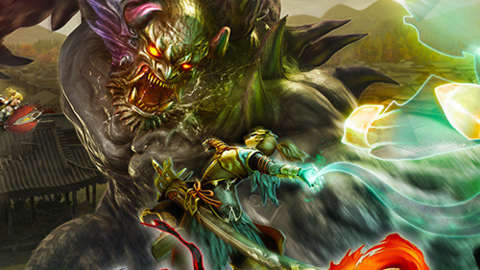 Toukiden 2, the upcoming sequel to the demon-hunting RPG Toukiden.