Touch My Katamari is a fun return to form that ends long before it has a chance to wear out its welcome.

There was a time when the King of the Cosmos was a colorful personality, larger than life. Perhaps his fame had something to do with a jaunt in the sky that temporarily left Earth with no stars, or maybe people just loved his absurd overreliance on the royal "we." Whatever the case, the peculiarly clothed king was anything but forgettable. According to Touch My Katamari's story, game enthusiasts have changed in the years that have passed since Katamari Damacy arrived on the PlayStation 2. Many of them no longer look at the series or its monarch as anything particularly special. In a horrifying twist, one father can't even decide for his son whether the enormous monarch is more amazing than the boy's school principal.

Touch My Katamari begins with the horrified king eavesdropping on that fateful conversation. Depressed by the realization that people no longer adore him, the king decides to stage a comeback. He turns to his son for assistance. As a miniature prince in a green jumpsuit, you roll a sticky ball around the world. You gather tiny objects, animals, people, and eventually buildings as your katamari grows to a suitable size and then is turned into a sparkling star by your eccentric but powerful father. That's the only way the proper order of the universe can be restored.

The lighthearted plot is a return to form for a franchise that definitely needed it. The main story strand is joined by a secondary thread that tells the tale of a slacker named Goro who has a test coming up but can't seem to pull himself away from the lure of otaku. Goro's adventures unfold in exaggerated cutscenes that feature a surprising amount of action, given their subject matter. Meanwhile, the king's trials consist of humorous conversations that you have with him and his subjects between stages. You'll likely find yourself looking forward to each new scene before you get back to rolling a ball around to collect more junk.

Touch My Katamari contains only 12 environments, each with only one default assignment. Eight levels direct you to gather rubbish indiscriminately. Objectives in the other four stages provide twists on the standard mandate. In one case, for instance, you need to collect as much food as possible without exceeding a calorie count (easier said than done, since guessing at potential fat intake is difficult unless you stick to collecting only fruits and vegetables). In another scenario, you can play until you roll over either a bear or a cow, with the goal being to collect the largest possible specimen of either species. The alternative objectives make things interesting, but the limited number of unique stages hurts. Skilled players can probably work through the game in three or four hours, and then they're left with nothing to do but unlock content.

Fortunately, there are plenty of reasons to keep playing even after you beat every stage and see the closing credits. Each stage contains several hidden objects known as curios, and a missing royal cousin is lurking somewhere in each environment. The more trinkets and characters you find, the greater your rewards if you manage to complete the stage. The King of the Cosmos rates you on a 1-to-100 scale, and one of his lackeys awards you candy based on your performance. That candy serves as currency that you can then spend in the various shops.

Action stages are selected by wandering around on the giant king's right shoulder, while the left shoulder is reserved for merchants and special menus. You can head to the shops to purchase two alternate modes for each of the stages: an untimed Endless mode and a K Drive mode that reduces the time you are provided to complete a stage while also speeding up your movements. Selections from the soundtrack are also yours for the taking, if there are any that you want to hear on demand. You can then assign purchased tracks to a stage before playing through it, or just listen to your favored selections from a separate menu. Finally, you can also buy costume pieces--belts, crowns, capes, and the like--for the king (who sometimes makes requests and gives you a few days to complete them).

If you head to another menu, the king models your purchases with exaggerated flair. It's fun to watch him strut his stuff while wearing a bridal veil, for instance. Even if those rather juvenile antics don't amuse you, the bulk of the game's trophies are tied in to the goodies you purchase. You have to play through stages a number of times to earn enough candy to buy everything and therefore earn all of the trophies, even if you're smart about how you apply multipliers at the end of levels.

Touch My Katamari retains the fun visual style that has been a franchise hallmark from day one. The familiar blocky chickens and cars and junk have perhaps never looked sharper than they do on the Vita's screen. Though there's not much to admire between stages other than the occasional cutscene, the environments are impressive and benefit from good draw distance. Objects occasionally pop into view if you pay close attention to the distant horizon as you roll around in pursuit of objects to add to your katamari, but such visual defects are minor and never interfere with your objectives. You might forget how impressive what you're seeing really is until you start a late stage on the street level and eventually find yourself rolling up the buildings that once towered above you, all without a hitch.

Touch My Katamari has more going for it than just visual charm; it's also the first portable game in the series to use twin analog sticks. The PSP installment's use of face buttons technically worked, but it didn't feel natural. Here, you have two control options that both require the Vita's right analog stick. If you choose the classic setup, the prince moves in the direction that both analog sticks are pressed, or prances around his katamari in one direction or another if only one stick is in use. If you're newer to the series, you may prefer the standard setup, which assigns camera controls to the right analog stick. You can pause the game at any time and choose the other control scheme, all without losing any progress. Touch controls are assigned to both the screen and the back of the Vita unit, letting you warp the shape of the katamari so that it can squeeze through narrow openings or flatten down like a rolling pin to more easily collect numerous small items in a hurry. To efficiently clear most stages, you need to shift between shapes depending on each situation you encounter.

Though Touch My Katamari doesn't feature a lot of unique stages and doesn't bring much to the series that's new, it at least returns to the basics in a compelling fashion. Returning fans and newcomers alike should find that the newest game in the series provides plenty of reasons to remember the King of the Cosmos again. 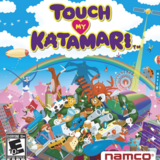 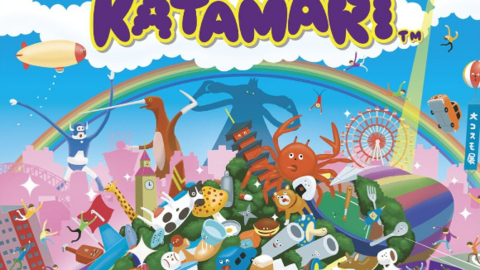 In Touch My Katamari, the ever-growing ball of bits and bobs is controlled by touching the screen to roll it in any direction.