Top Spin is, quite simply, the most well-rounded, feature-rich game of tennis to be found anywhere, on any system.

Ever since Sega brought tennis to the video gaming masses with Virtua Tennis, there have been many imitators, but none have been able to match the quality of that game--until now. Power and Magic Developments, a European development house whose previous experience lies mainly in soccer games, has teamed up with Microsoft to create Top Spin. Top Spin is, quite simply, the most well-rounded, feature-rich game of tennis to be found anywhere, on any system. Virtua Tennis players who have been clutching their Dreamcasts for the past few years can now safely let go, as a suitable replacement has finally arrived.

As a product of the post-Virtua Tennis world, Top Spin gives you all the different groundstrokes you would expect, including devastating forehands (regular, inside-out, and running), blazing backhands (both one- and two-handed), half-swing volleys, volleys, half-volleys, drop shots, and offensive and defensive lobs. All groundstrokes feature realistic spins as well, including top, under (back), and even side. Serves can be of the flat, slice, and kick variety, and all utilize the familiar rising power meter. Each stroke and serve has its own strategic uses, and the gameplay, in general, is very smooth and responsive, rewarding skill and precision. In addition to these real-world strokes, Top Spin introduces the risk shot. Pulling the right trigger activates the risk shot meter, which oscillates up and down rapidly, and letting go of the trigger stops the cursor. The closer to the center of the meter you get the cursor, the more powerful and accurate the shot. Though if you land too close to the edges, the shot is likely to fly wildly out of control. The speed of the risk meter is directly proportionate to how full your "in the zone" meter is, which increases as you make winning shots. So, the better you're doing in the match, the more likely you are to pull off a successful risk shot.

The whole risk shot system is a nice, arcade-inspired addition to the gameplay in Top Spin, which is already quite accessible, though it's not at the expense of responsiveness or versatility. Fans of Virtua Tennis will have no trouble picking it up but may be surprised by some of the subtle nuances Top Spin also contains, such as the significant differences between playing on grass or clay courts, which force you to compensate for the differences in shoe grip and ball bounce. The game is accessible, but these small touches simply bring some added depth and realism.

Whether you're all alone or with a group of friends, Top Spin offers enough modes of play to keep you satisfied. If you're looking for a one-off match, there's the exhibition mode, or if you want an elimination-style competition, there's the custom tournament mode. Both of these modes allow you to customize the gender of the players. You can also decide whether it's a doubles or singles match, the number of games per set, the number of sets per match, and the skill of the computer opponents. And both of these modes can be played with up to four players.

If you're looking for a strictly single-player experience, the career mode allows you to create your own custom tennis pro to travel the world, play in tournaments, earn sponsorships, and hone skills. The player creation functionality is largely cosmetic, though in this regard it's also quite comprehensive. Facial structure, body type, height, and weight can all be adjusted, and you can choose from a wide variety of apparel, right down to the type and color of your socks, though your gear selection will increase as you progress through the career mode. In addition to the aesthetic changes you can make to your character, you'll determine several character traits that will affect how your player plays, including whether you're right- or left-handed, and whether or not you're a power player, a precision player, or a mixture of the two. You even get to decide as to whether or not your backhand is single- or two-handed.

Once you've created your tennis pro, you're released into the world. From here you have several options. You can compete in a tournament, though, right off the bat, the number of tournaments for which you'll be eligible is limited. You can try out for a sponsorship from companies like Prince, Reebok, Adidas, and Oakley, which can net you cash, fame, and some rather cool licensed gear. The cash is important because it costs money to train with the different tennis coaches, and you simply won't be able to keep up with the players in the bigger-name tournaments if you don't increase your player's stats.

Though the career mode obviously mimics the one found in Virtua Tennis, the minigames you'll encounter in the training sessions aren't quite as varied or entertaining, and all of them basically boil down to using specific swings to place shots in designated targets on the court. The whole sponsorship thing is a cool touch, though, because it gives you the feeling that you're actually a real-world tennis pro who has more to do than just deal with the rigors of competition.

The exhibition, tournament, and career modes in Top Spin are all skillfully executed and are completely worthwhile parts of the package, but what really seals the deal and puts Top Spin head and shoulders above the competition is the inclusion of Xbox Live support. Here, you can play one-off exhibition matches or official matches, which will affect your worldwide online ranking. Additionally, Top Spin is a part of Microsoft's XSN Sports lineup, which means that you'll be able to create custom online leagues with your friends--complete with ranking systems and stat tracking. That it's the first tennis game to go online definitely works in favor of Top Spin, and that the online mode is well done, with a good number of play options, doesn't hurt either. Online play also eliminates the issue of being shoved into the backcourt in a two-player game (all players will view the action from an ideal front-court perspective), something that has plagued the single-screen multiplayer component in all tennis games, Top Spin included. Top Spin also lets pairs of players on a single Xbox go online for doubles matches.

The gameplay will certainly keep you playing, but it's the presentation that really draws you in, right off the bat. The look of the game is unmatched by any other tennis game before it, displaying a high level of quality in virtually every facet of the graphics. The courts are realistically rendered and are brimming with fine details. Dust gets kicked up on clay courts, and skid marks made by players remain visible. When in tournament play, the spectator attendance increases as it goes from quarterfinals to semifinals to finals. And while most tennis matches take place in giant "Wimbledon Centre Court-style" arenas, Top Spin includes a wide variety of court types. You'll play in huge 20,000-plus capacity arenas, but you'll also play in an assortment of more-intimate courts--right on down to small neighborhood courts in public park-style settings, giving a broader representation of the sport of tennis rather than just focusing on the televised big money superstar matches.

Head to toe, the players look really good, and the fluidity of their animations make the matches look all the more believable. The lighting is clean and realistic, though you will notice some minor touches that err toward style over realism, such as the translucent motion-blur that follows the ball after a power shot. Other little elements, such as the different split-screen and picture-in-picture replays, as well as the player reactions that you can evoke, help sell the whole experience. The only really apparent flaw in the graphical presentation of Top Spin is that, when seen up close, the applause animation for the crowd looks really stiff and fake. Considering it's a fully polygonal crowd, which is a rarity for sports games, it seems petty to gripe about such an insignificant detail.

Similarly, the sound in Top Spin is truly some of the best to be found in any tennis game. The sound of the racquet making contact with the ball, and the ball then bouncing on the court, sounds clean and crisp. These actual sounds differ depending on the shot type and strength and will echo differently depending on the size of the venue. The sound design is pretty stripped-down, though. Smaller touches--like the way players grunt when executing powerful shots, the way the crowd reacts to an especially impressive save, and the different announcers you'll encounter around the world--really help ground the experience in reality and make it better overall.

Top Spin would not exist had Virtua Tennis not come before it. This is an undeniable truth. But Top Spin comes with more features, deeper gameplay, significantly better graphics, and an experience that, overall, promises to be even longer-lasting. There are definitely some improvements that could be made to Top Spin, such as more varied training exercises in the career mode and/or perhaps more comprehensive player and tournament licensing, thus leaving room for a Top Spin 2. But, really, this is as close to flawless as a tennis video game has ever been. 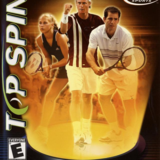