Tony Hawk's Proving Ground gets most of the Tony Hawk formula down, but the parts that stray from that formula are the parts that don't work out so well.

Not many franchises can say that they single-handedly launched a genre, but that's exactly what Neversoft's Tony Hawk series did back in 1999. Annual sequels have come ever since, some of which have made major changes to the skateboarding formula, while other have made minor adjustments. This year's game, Tony Hawk's Proving Ground, starts with last year's game as a basic formula, but shuffles around the goal structure and game progression. It's the same solid skating base that the series has had all along, but a smattering of frustrating goals that feel like they're broken and a heavier focus on using a bad level editor to place objects into the world gets in the way and drags the entire experience down with it.

Though past Hawk games have tried to bring all of its skating together using a story, Proving Ground compartmentalizes its story by breaking it up into three distinct "lifestyles." You've got the career path, where pro skaters like Arto Saari take you around and shoot skate videos with you. Then there's the hardcore path, where guys like Mike Vallely and Dustin Dollin teach you the fine arts of wearing jean jackets and how to properly knock over pedestrians. Lastly there's the "rigger" path, where guys like Jeff King and Daewon Song turn Proving Ground into a puzzle game and have you place or modify pieces around the environment and rig up some new trick lines. On top of all that, there are plenty of other nondenominational chalk challenge goals, where you'll see marks around the world that ask you to grind, manual, wallride, or leap from one mark to the next. Most of the goals can be completed in three ways for three different difficulties, ranging once again from amateur to sick.

From the three lifestyles, things are even further broken down into episodes, which usually focus on one specific skater giving you a handful of different goals. Bob Burnquist's set of goals has you learning some new tricks, then taking on competition skating. Bam Margera's goals focus more on climbing than on actual skating, though you'll still have to skate around a bit to interrupt the filming of his TV show. Lance Mountain shows up to show you how to carve bowls and slash grind, two of the game's new control additions. When you complete all of the episodes in one lifestyle, an "uber" challenge appears. Tying all of this together is a meter that fills up as you complete goals, and each time it's full, your career advances, netting you a shoe sponsor, a signature board, your own skate video, and so on. You'll eventually become successful enough to form a skate team, and this in turn unlocks a new challenge. When you beat that--a fairly trivial set of tasks in the grand scheme of things--the credits roll with no grand finale. It's possible to claim that you "finished" Proving Ground with something like a 40 percent completion ranking, something that will probably take most Tony Hawk veterans something like six hours to accomplish. Obviously, there's more to do and see, like classic mode, high score runs, and a new dot-eating goal type called Hawk-Man, though the quality of the goals is spotty.

The focus on rigging as a lifestyle means that a large chunk of the action is devoted to you using a little world editor, where you can place your own rails, ramps, and other objects. This editor is pretty bad, though, so it can be super frustrating to use. Furthermore, the goals that require you to place your own objects usually aren't much fun, because it's stuff like creating long sets of rails to move you from one checkpoint to the next without touching the ground. What's worse is that other photo goals also use this editor to let you plop a camera down wherever you think it will do the most good. It can be hard to determine if the camera's in the right spot. Camera goals have another problem--you actually have to take the photo yourself. Once you skate into frame, the action slows down, effectively throwing off your timing if you're trying to land a trick at the same time. Then, while all of that is going on, you need to push in the right stick to take the picture. This leads to a whole lot of frustrating hand twisting. We also encountered at least one goal where it felt like no matter where the camera was placed, it couldn't be placed low enough to actually trigger the slow-motion photo-taking sequence while doing a required grind.

While we're on the subject of goals that feel broken, one of the first goals you're given with the mod tool, which can be used to alter objects already in the environment, has you trying to mod a box that will lower a window-washing platform alongside a building. But every time you move your little hammer over to the glowing, spinning hammer to activate it, your cursor drops below the ledge. After minutes of careful pointer movement, we were able to negotiate what seems like an entirely unintended challenge. With problems like these, just about anything that involves the rigger menu feels totally sketchy, and it's a real shame that so much of the game is dependent on it.

As in most years, there are a good number of differences in how you skate and what tricks you can do. In addition to the bowl carving and slash grinds, the "nail the" system has been built out to include slow-motion grabs and manuals, in addition to the flips-only nail the trick system that was in Project 8. Nail the grab mode lets you grab the board with either hand and tweak it out in any direction. You can also perform finger flips. All in all, it's neat, but it's a little weird that you can't kick your legs out while grabbing to craft your own benihanas or something like that. It comes off feeling a little limited. Nail the manual is a good idea with bad execution. The concept is that you can hold down the right trigger and use the analog sticks to adjust your board so that you land on one set of wheels. The problem is that the camera stays focused on your board the whole time, so you have no idea which direction you're facing or what obstacles are in your way. Also, the slow-motion manual controls feel overly sensitive, making something that's almost automatic in full speed feel arcane and overly tricky in slow-mo. You'll also learn how to aggro kick, which is a user-controlled push that gives you extra speed. It's a nice addition that makes a good case for why the PlayStation 3 needs rumble controllers, because on the 360 the controller shakes a bit when it's time to hit the button again to keep your speed up. On the PS3 you have to solely rely on the position of your skater's foot.

All of this stuff carries over into the online mode, which lets up to eight players get into the world and play a variety of well-worn game modes. This is new to the PS3, which didn't have any online last year, but if you've been playing Tony Hawk for any length of time, this is familiar territory. You can limit games to specific sections of the gameworld, play in your custom skate lounge, or play in the entire gameworld, which is pretty large. A little too large to make games like graffiti too exciting, since all eight players could be tagging pieces in different parts of the environment and never see each other or attempt to steal pieces. The standard modes like trick attack and combo mambo also appear, along with a handful of others, like walls, where your skater spits out a Tron-light-cycle-like wall behind him that other skaters need to avoid. If you like, you can wager your bankroll in ranked matches, which is a surefire way to go broke, given that the game's online mode seems to appeal most to veterans of the series, who will absolutely tear you apart online.

Proving Ground looks better than Project 8, though they're similar-looking games from a technical perspective. The larger visual difference comes from the environment itself. The game is meant to reflect a piece of East Coast skating, and the gameworld comprises skate-friendly versions of Washington DC, Philadelphia, and Baltimore. Much of the game has a dirty, urban look to it that works pretty well. Some aspects, though, like the artifact-filled video footage that pops up whenever you meet a pro skater, or the way the characters' mouths occasionally don't move when they speak and look really weird when they do move, don't look so hot. There are also plenty of clipping issues, where your skater's leg will pass right through a building when you're hanging from it, or the way the "emo" haircut in the game passes right through your sunglasses. Stuff like this makes it look more like a higher-resolution PlayStation 2 game.

The game audio is fairly standard, with plenty of good skateboarding sounds, though a lot of it feels recycled. There's a healthy amount of voice acting in the game, and most of it comes from pro skaters, most of whom flatly deliver their lines and detract from the feel of the game. If there were an award for skating's best voice actor, it would probably have to go to Mike Vallely, who sounds genuinely tough and delivers his lines with more believability than the rest. The sound is roughly the same between the PS3 and 360 versions, though the speech sounds a little tinny in the PS3 version. The soundtrack is Neversoft's standard Tony Hawk formula, which seems to have become: mix together a bunch of genres, include a Jurassic 5 song, include one or two random old rap songs (Slick Rick's "Children's Story"), and include one older song that you probably haven't thought about in quite some time (Folk Implosion's "Natural One").

Perhaps that's the biggest problem with Proving Ground. While the surface and structure of the game have seen more than enough changes to fill a bulleted list, the underlying gameplay and tasks have been done better in previous entries in the series. If you're a fan of the series who has been patiently waiting for Proving Ground, you'll probably find enough to keep you busy and keep you mostly satisfied, but it's likely that you'll be at least a little disappointed with this year's model. 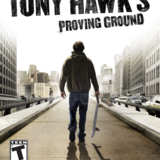