Tony Hawk's Pro Skater 5 momentarily recalls the greatness of earlier games in the series. Skating around and looking for opportunities to test your creativity and reflexes is sometimes as enjoyable today as it was 10, 15 years ago. However, these moments of excitement are fleeting. THPS5 a full-priced game that feels like an alpha release. The core mechanics are there, but the supporting systems are half-baked and rickety.

For anyone who's played Tony Hawk games in the past, skating, pulling off tricks and forming combos in THPS5 will come naturally, and it's accessible for newcomers, too. Grinding has been made slightly more difficult, however, because the same button that's used to grind is also tied to the new slam action, which forces your skater and their board downward. You can use it to your advantage if you've mistimed the distance between takeoff and landing during a combo, but you can no longer buffer a grind while in mid-air because you instantly plummet to the ground.

Of course, skating sessions are only as good as the locations they take place in, and the eight maps in THPS5 are too small, lacking in interesting opportunities. They're also ugly, with poorly drawn textures and constant texture pop-in. After a few minutes with each map, you've seen pretty much everything there is to see. Pulling off combos often requires identifying a series of loosely connected objects that you can grind on between air-based tricks, and there are a few cleverly hidden ones to be found, but nowhere near as many as in past games, which were proudly stuffed with hard-to-find secrets and combo opportunities.

Some maps will frustrate you in other ways beyond their lack of interesting elements. It's all too easy hit a ramp or jump off of other objects, only to find that you've gone out of bounds. This feels unfair, because these areas are fully-rendered and look accessible. THPS5's camera jitters when you ride over rough terrain--or whenever the game feels like it. There were times that the camera was so shaky and disorienting that I had to stop playing in order to curb my discomfort. Frame rates are also an issue, which is surprising given the game's simple and outdated graphics. It's not uncommon that you fall through geometry, clip through it and ruin a combo, or fall victim to anomalous physics quirks, either.

Progressing from map to map requires that you collect stars by performing various feats and completing challenges. These challenges can include reaching a high-score, collecting items, or pushing balls out of a pool, among a few others. These tasks vary little from map to map, and they are indeed tasks, because they never deliver an enjoyable or challenging experience. You're only motivation to play them are the stars to unlock maps and skill points that can be used to increase your abilities, though they never make a tangible difference. Your skater feels the same on day one as it does on day five.

THPS5 is built as an online game, but it does little to entice you to playing with others. I was never paired with more than one other person outside of freeskate, and there were times when a multiplayer challenge would start with me as the sole participant. Online connectivity gets in the way during single player sessions, too. If you're connected to the internet when you try to play single player, THPS5 still tries to connect to a server. If it has any problems during this process, you have to wait for it to timeout, disconnect your console from the internet, and try again. At times like this, you can't help but feel like you're wasting your time with a game that isn't finished.

Beyond the boring levels and challenges, THPS5 has another big problem with organization and presentation. When scrolling through the main menu, you're presented with a few options: THPS5 Levels, My Levels, and Player Created Levels. The game teases you with more to do by placing arrows on the top and the bottom of the list, as though you can scroll to see more, and it does the same thing on the map selection screen, creating the illusion that there's more to the game than there actually is. Once you're playing a challenge, there's no way to exit it besides returning to the game's main menu, and even if you stick with it and wait for the timer to tick away, you have to endure a series of loading screens before you're back to skating. I tried my hardest to engage with the activities in THPS5 to eek out enjoyment, but problems with menus, loading screens, and glitches made it all too easy to put the controller down and walk away.

Within THPS5 lies a basic skating game that's difficult to enjoy, because you have to jump over numerous hoops and ignore a plethora of obvious issues to find the smallest amount of fun. Previous THPS games were able to capture your imagination, and motivate you through character progression, gear, interesting levels, and even a great soundtrack. The soundtrack in THPS5 is good enough, but the game is riddled with technical glitches and design missteps, making it a huge step back for the series

View Comments (176)
Back To Top
3
Bad
About GameSpot Reviews 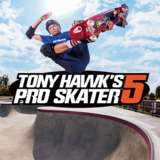 Peter played 10 hours of THPS5 before he was unable to cope with the boring challenges, constant loading screens, and relentless glitches.