As most major publishers' development efforts shift to any number of next-generation platforms, Tony Hawk 2 will likely stand as one of the last truly fantastic games to be released on the PlayStation.

Tony Hawk's Pro Skater 2. The mere concept of a sequel to last year's surprise hit is enough to send chills down the spines of the game's die-hard fans. Luckily, those chills are not in vain - Tony Hawk's Pro Skater 2 is the perfect example of how to make a sequel to an already amazing game. The levels are bigger, the trick catalog is more plentiful, the number of goals per level has been doubled, and the already stunning gameplay has been honed even further.

All of the professional skaters from the first game have returned, and new skaters like Rodney Mullen, Eric Koston, and Steve Caballero have been added to the roster. Also, you can create your own skater, choosing from different skin and model types. All of the first game's modes are back. You can opt to skate a two-minute single session, freely skate around a level with no time limit, or enter the career mode. The career mode here is much more than the first game's. Completing level goals in career mode earns cash, and you spend that cash on higher attribute points, new boards, and new tricks. This makes the game pretty customizable - if you don't like your skaters tricks, a little money and some time on the trick screen and you can set any trick to almost any button combination you want.

With the exception of the three competition levels, each level in the game has ten different goals, each with a different dollar value assigned to it. Three of the goals are score-based, and you still have to spell skate and collect a hidden tape as well. Four of the goals are fairly level specific. In New York, you'll do things like collect subway tokens, 50-50 grind on a sculpture, and grind on a set of subway rails. In Philly, you'll have to drain a fountain, find four lips and do lip tricks on them, and collect small liberty bells. In Venice, you'll ollie over five "magic" bums, tailslide the Venice Ledge, collect spray paint cans, and find four specially marked transfers. Finally, the goal in each level is completed when you've completed the other nine goals and collected every piece of spinning money. In competition levels, you earn 90 percent completion by earning the gold medal, and the remaining 10 percent comes from collecting all the cash in the level. Later levels are opened up when you've collected a certain amount of cash. You don't need to get 100 percent completion in each level to beat the game's final level, but you'll be too addicted to the game to settle for anything less.

The multiplayer game is just as exciting as it was in the original. With the exception of horse, all of the other modes are played simultaneously. Trick attack is a timed score contest. Graffiti tags a surface with your skater's color when you include it in a trick - if you do a better trick on a surface owned by your opponent, it switches to your color. Tag gives each player a timer, which only counts down when you're "it." The first player to run out of time loses. The game still runs at full speed in the two-player split screen modes, though most of the levels have been altered a bit for multiplayer - for instance, the Skatestreet level loses its outdoor areas, and the Bullring no longer allows you to get up into the stands, which have been replaced by draw-in shrouding fog.

Tony Hawk 2 looks so good that you may occasionally have trouble believing it's a PlayStation game. The textures are large and colorful, and some levels include lots of nicely detailed graffiti. The levels themselves are absolutely enormous, each containing at least one hidden area. Yet even with the large levels, the game runs at a nice, solid speed at all times. The camera works extremely well in almost any situation, though it would have been nice to see a look function in the game, like the skater's eye function found in Sony's extremely Hawk-like Grind Session.

The only real problem with the original Tony Hawk's audio was that the soundtrack was a little singular - if you didn't like that style of music, you were essentially out of luck. Tony Hawk 2 breaks up the monotony nicely, a wide range of artists including Naughty By Nature, Powerman 5000, Rage Against the Machine, Dub Pistols, Papa Roach, Anthrax (featuring Public Enemy), and Bad Religion. The game's sound effects are outstanding, mixing a nice balance of ambient sound (nearby cars, trains, announcers at the skate competitions, and so on) and the sounds of skating, such as the clink of your trucks hitting a rail, the different textured sounds of varying surfaces, and, of course, the sound of your skater's body slamming to the pavement.

The first game already had extremely tight gameplay - the levels were designed with big trick combos in mind, but there was room for personal style and innovation. Tony Hawk 2 opens up the concept even further with the addition of manuals - essentially front or back wheelies - which you can use to link trick combos together when crossing flat land. The larger levels of Tony Hawk 2 are extremely manual-friendly, yet the manuals never give the game a gimmicky feel. Instead, they really give you even more control over your skater and open up the scoring for even bigger combos. Also, the first game had gaps - small bonuses that gave you points for transfers, jumps, and long rails. Tony Hawk 2 is packed with these gaps; some levels have well over 40 different gaps. A gap checklist on the options screen helps you keep track of which gaps you've yet to find.

Another amazing addition is the skate park editor. The editor gives you an empty room and lets you fill it up with rails, ramps, pools, boxes, and just about anything else. It's extremely easy to use, and you can set it up for single-player and multiplayer play. Also, in case you aren't feeling terribly creative, Neversoft has stashed a ton of levels on the disc for you to mess around with. The skate park editor is great on its own, and it justifies owning DexDrive, as well. Surely a smattering of fan sites will offer large collections of created levels for download to such a device.

Near the end of a platform's life , most of its software falls into one of two categories. The first is shovelware - cheaply produced games hoping to cash in on the platform's large installed user base. Games in this category fail to innovate and come off as games that would have been decent three or four years ago, but simply can't compete with a system's better offerings. The second category is a fairly elite club, containing games from developers that clearly know how to exploit the aging hardware for all its worth. The PlayStation's final year is coming to a close, and in Tony Hawk's Pro Skater 2, Neversoft has put together a game that clearly belongs at the top of the second category. As most major publishers' development efforts shift to any number of next-generation platforms, Tony Hawk 2 will likely stand as one of the last truly fantastic games to be released on the PlayStation. 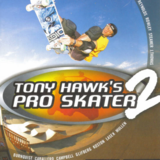