The Tony Hawk series has traditionally been all about open-ended levels that give you the freedom to skate however you like and do whatever you want while seeking out goals that will help you move ahead. Downhill Jam puts those goals on a steep slope and refocuses the trick-based gameplay of the franchise to support what's essentially a downhill racing game. The structure of the game is pretty sound, but moving the tricks into a racing scenario completely changes the game, and not always for the better.

The same basic ideas you've seen in previous Tony Hawk story modes apply here. The story is that Tony Hawk wants to start a downhill racing team, and you're his first draftee. So it's off to San Francisco, where you're given your first list of goals. Many of the goals are based on winning downhill races against artificial intelligence-controlled skaters, but some of the more typical Tony Hawk-like goals pop up here, too. Some levels ask you to bash into garbage cans, meet certain score requirements, or do specific tricks on specific pieces of the level. The goals that require you to collect items are a little forgiving, since there are usually more items on the level than you'll need to succeed. But the trick goals can get annoying, because if you miss it once, you can't easily skate back and try it again, since you'd have to skate uphill to get there. The game lets you quickly pause and restart a goal, but that's not always speedy, either. Furthermore, many of the goals are either too easy or too tough. Style goals, for example, judge you on how "stylish" you skate, and you earn points for landing cleanly, not wrecking, and not repeating tricks. But any time you touch another skater, you get wobbly and lose points for having a sloppy landing--even though you might not have been in the air in the first place. As you complete goals, you open up the game's other levels and earn stat upgrade points that you can put into four different categories. The same levels are used in both single-player and multiplayer, and the courses have plenty of long trick lines and handy shortcuts. The game controls are the standard Tony Hawk style, with a few tweaks. You don't need to do a revert to keep a combo going, because the game gives you a few seconds to get back into a trick before calling your combo finished. Also, the Y button is used to give you a turbo boost when you're on the ground. You earn more boost by doing tricks.

In addition to the world tour story mode, you can jump into a quick race or free skate the levels. You can also compete against other players locally or over the Internet via the game's Nintendo Wi-Fi Connection support. There are a lot of different challenges you can get into when playing against others, such as big air, which ranks you by how much time you can spend in the air while heading down the course, or elimiskate, which cuts the last-place skater from the competition at set intervals until only one remains. Overall, the multiplayer is more interesting than the single-player game, but there's one tiny catch: The online servers for this game are almost completely empty at all times. We've been able to get into some two-player matches using the game's automatch feature, but attempting to get four-player games going with random players results in you spending an hour or so staring at a menu that says "this may take some time..." No kidding. If you're more organized, the game does have full friend-code support, and seeking out friends when they're actually online is a much faster way to get into games. Plus, the game has voice-chat support that's only available when you're playing with friends. You can also check out the online leaderboards and download an extra goal for the game.

The graphics in Downhill Jam are cel-shaded and sport the same style as last year's Tony Hawk's American Sk8land. You can outfit your skater in a bunch of different clothes, including wrestling masks. You can also design a logo and customize shirts using the DS's touch screen. In game, the bottom screen serves as a map of the course, with points of interest highlighted, depending on which goal you're currently trying to meet. When you have special tricks stocked up, you can either tap three spots on the touch screen to pull off those tricks or do them the traditional Tony Hawk way by executing a small button combo. You can record a custom sound effect for your skater using the microphone, too, just like last year's game. The sound effects are the same as what they've been using for a long time now, but they still represent the sounds of skateboarding pretty well. The soundtrack is heavily compressed digital audio with licensed songs. It's a little scratchy, and on top of that, it tends to skip from time to time, especially when you're looking for skaters online. The game also locked up on us several times on the San Francisco level, forcing a hard restart of the Nintendo DS and some loss of progress.

The points that stick out about Downhill Jam are its somewhat buggy nature, a serious lack of online competition, and a single-player game that has potential but often isn't too exciting. On top of that, changing the Tony Hawk games into racing games plays away from the series' previous strengths, making the whole game feel like a second-rate SSX-style game. If you have friends that own the game, you'll probably enjoy some of the online competition, but beyond that, Downhill Jam is a real downer. 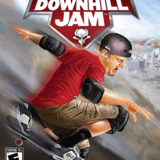