Tony Hawk Ride is the ultimate triumph of gimmick over game. The concept: Build a skateboard peripheral that lets players simulate skateboarding in their living rooms. The result: half-functioning hardware that fails to function with consistency and a shallow game devoid of excitement. Vert skating and free skating are the only sources of mild enjoyment here, but the fun is too short lived to justify the whopping $120 price tag. The Birdman was once associated with video game greatness, but this is the worst game yet in a declining franchise, and the result is a massive train wreck.

It's impossible to separate the board from the game. After all, Tony Hawk Ride must be played with the included skateboard peripheral, and for the time being at least, the peripheral cannot be used with any other game. It takes some time to get used to the feel of the board, though your skating career begins with a number of tutorials that help you get on your feet, so to speak. From there, it's a matter of completing races, performing tricks for points, and trudging through a series of short challenges. Fortunately, the peripheral is easy to set up and physically solid. It also feels weighty and resilient, as if ready to withstand hours of punishment.

Yet while the hardware can take a beating, the oft-useless board all too often fails to read your movements with the precision necessary for the game to deliver any amount of fun. Manuals, ollies, and nollies are relatively simple to pull off. You perform manuals much as you'd expect: by raising the nose or tail of the board in the air and holding the position. You do ollies by popping the nose into the air, while nollies, of course, are executed by popping up the tail. Expectedly, ollies and nollies form the core of your move set, but when Tony Hawk Ride starts expecting you to pull off anything more precise, it collapses. The game separates flip tricks into two types: tilt and flick. You perform tilt tricks (like standard kick flips) by performing an ollie or nollie and tilting the board once you're airborne. Flick tricks (like 360 flips and impossibles) occur when you move the nose or tail from side to side after an ollie or nollie. But getting the game to recognize your motions properly is futile. Tilt tricks register as flick tricks more often than not, which in turn leads to constant failure when the game demands any kind of precision.

Tricks that involve the infrared sensors on the front, back, and sides of the peripheral are just as arbitrary, working only some of the time. You swipe or hover your hand over these sensors when you want to perform finger flips and grabs. But these moves aren't consistent. Even when the icon at the bottom of the screen indicates that you have activated the sensor, you will often still fail to perform the trick properly. This baffling issue is compounded by the half-second or so delay between the movement you perform on the board and the action that occurs onscreen. If you fail the trick, you're never sure whether you swiped your hand across the sensor too early, held it there too long, or your movement wasn't recognized at all. Eventually, challenges will require you to flip the board 90 degrees for board slides, and perform advanced tricks after setting one up by hovering a hand (or a foot) over a sensor before your ollie. Stringing tricks together can be a nightmare no matter how agile you are because you absolutely cannot depend on the board to communicate your wishes to the game.

If you're a skater, you may be irked by how the game separates trick types (no skater would ever use the term "tilt trick"), but you'll pick up on the game's expectations easily enough. If you're a newcomer, however, you'll find that Tony Hawk Ride does not welcome you with open arms. Early in the Career mode, training videos and interactive tutorials introduce you to the basics. Eventually, however, the training videos are removed from your career progression and the game asks you to do new tricks without telling you how to perform them. Luckily, there are more videos to help you out, though you'll need to exit the challenge to view them. But in some cases, the game will ask you to perform a trick the videos don't cover, so you'll be on your own. At least you needn't worry about steering if you play on the casual difficulty level because the game takes over main steering duties for you. If you play on confident or hardcore difficulty, in which you must lean in order to steer the board, prepare for an even greater headache.

The Challenge mode, where you complete a series of specific tricks, is where you'll find the greatest frustrations because it requires the most precision from the imprecise controller. Your career also features race and trick modes, yet while they aren't as immediately frustrating as the Challenge mode, you won't get any joy out of them because they're too pedestrian. In the Race mode, you can ollie and grind your way through the race, kick-pushing and picking up power-ups that subtract from your total time while avoiding tokens that add to your total time. Trick mode scores you based on the moves you pull off, but moving the board about willy-nilly results in more impressive-looking stunts than exercising any expertise you've developed in the Challenge mode. This is true even on the scattered half-pipes. Vert skating may be fun to watch, but when your actions on the screen don't necessarily reflect your intentions, there's no sense of reward--no matter how sweet your christ airs look.

Tony Hawk Ride's flaws don't end with the lousy controls. The game feels half finished, offering up the most bare-bones experience possible. Don't expect skater-specific specials or large, high-concept levels. You can free skate, but most of the areas are small and none of them offer the fast-paced freewheeling of previous Tony Hawk games. This is partially because Ride seems to fancy itself a simulation, though it's hard to take it seriously as a sim when you happen upon pedestrians that exclaim their surprise when you almost run into them…in the middle of a skate park. You'd think a leaner game would at least be easy to navigate, but the T-Mobile-branded menus are poorly organized. Intriguingly, the Wii version fixes some interface issues that exist in other versions of the game, but it breaks others. Your stance preference is saved within your profile, so you do not have to confirm your stance (regular or goofy) before each event, as you must do on the Xbox 360 and PlayStation 3. Helpfully, your postevent score saves automatically to your profile, so you don't need to reach for a controller every time you qualify for the scoreboard. However, the Wii version does not allow you to select another event on the same course when you've finished a run. Instead, you're forced to exit the course, endure a long loading screen, select the new event, and endure another long loading screen.

The online capabilities of the other versions have been excised here and replaced by a Mii Skate mode, in which you can take your own Miis, or a variety of built-in ones, into the skate parks. Yet in order to cavort about with your Mii, you must play through the same areas with another skater first. It would have been nice to select a Mii as your career skater, but alas, this is just one more way in which Tony Hawk Ride falls far short of its potential. Half-functional controls, bad menus, and shallow gameplay make this frustrating skating game a complete waste of money. 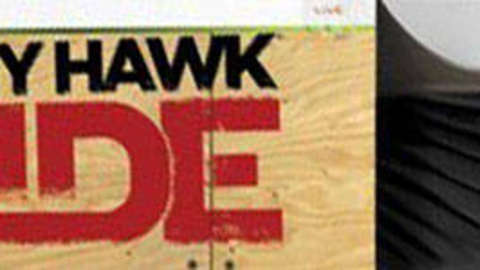 The venerable skating franchise is back with an all-new game based on a wireless skateboard peripheral that uses foot-based controls.