Tomb Raider Underworld will satisfy fans of Lara's previous adventures, but it does little to address previous games' problems.

When Eidos handed development of the Tomb Raider franchise to Crystal Dynamics, it was a risky but ultimately wise decision. The team managed to reinvent the series while staying true to its roots with Tomb Raider: Legend, while Tomb Raider: Anniversary built on solid foundations to reimagine Lara Croft's original adventure. Tomb Raider Underworld is Crystal Dynamics' third game in as many years, and the high work rate is starting to show. Lara may have plenty of new moves at her disposal, but little has been done to address the many camera and clipping issues still present. Tomb Raider Underworld offers an enticing new adventure, but if you're a fan of the series you'll find that Lara is starting to show her age.

As the "Underworld" suffix suggests, this Tomb Raider covers darker territory than its predecessors. It follows the same adventure template that we've come to expect, but it also deals with death, resurrection, and even Norse mythology in its story. Things start out badly for Lara; a prologue of her racing to escape her lofty mansion as it burns to the ground. Cut back two weeks, and we find Lara trying to take care of some of her father's unfinished business, something that leads her on to discovering more about her mother, characters from previous games, and the mythical Hammer of Thor. It's badly written, poorly voiced, and instantly forgettable for anyone but hardcore fans of the series, but thankfully the cutscenes are mercifully short, leaving you to get down to the serious business of raiding tombs.

Tomb Raider Underworld is constructed in an almost identical fashion to its predecessors, with exploration in exotic locations punctuated by occasional combat and vehicle sections. The interaction between Lara and the environments has long been the draw of the series, and performing daring jumps to scale seemingly impossible heights is as satisfying as ever. Lara's even learned a few new moves in the year since Anniversary, and she can now free-climb, balance along thin beams, and abseil using her rappel line. Crucially, none of these moves complicates Lara's basic movement, and while you have to adjust your eyes to the many new visual cues showing you where to go, they all add new levels to the simple pleasure of adventuring.

While these new abilities expand Lara's already-impressive acrobatic skills, there are a lot of gameplay issues that continue to annoy. The world is incredibly rigid, with strict rules on which platforms, objects, and edges can be interacted with and which can't. The places where Lara can go are well marked out--they feature nice right-angled edges and are usually lighter than the surrounding material to signify your route through. This makes it easier to figure out the correct way to go, but at the same time it means there's little room for improvisation, and the genre has moved beyond such linear progression. Even worse, Lara will frequently clip into a piece of the scenery and then refuse to come out until you stop, turn around, and run out of it again. Add all this to an incredibly unruly camera, and Tomb Raider Underworld is still just as frustrating as its predecessors.

There's an impressive mix of locales in Underworld, and the environments boast greater scale than ever before. The underwater diving is incredibly atmospheric, and while there's often no indication of where you need to go, you won't mind swimming around the beautiful-looking abyss. There are also some great outdoor locations, and you'll race through vast temples, snowy mountains, and jungle environments. While Lara's bike looks and feels more like Batman's Tumbler than anything from the real world, it's much easier to use than the vehicles in previous games, and there are multiple routes that you can take. As the name suggests, though, this game features plenty of underground adventuring, and the sense of claustrophobia as you descend into these lost worlds is wonderfully conveyed.

You won't come across an abundance of enemies in the game, but the ones that you do encounter are incredibly stupid. Human enemies will stand in front of you as you pummel them with gunfire, while the real-world and mythical beasts wait to emerge from the same spot every time. There's still no cover system in Tomb Raider, so you're left to go behind objects, run out to fire, and then repeat until you've dealt with the threat. It's incredibly fiddly when held up to the combat in Uncharted: Drake's Fortune, but thankfully there's an ultra-powerful weapon toward the end of the game that eradicates the need to take cover completely. The whole weapon system is poorly balanced from the start--you choose one firearm at the beginning of each level, but if you check your inventory you'll find Lara has everything from pistols to an assault rifle into her tiny backpack. Thankfully, the tedious quick-time events have now disappeared completely, while Lara can kick enemies that get too close for comfort.

Where Tomb Raider really challenges is in its puzzles, and while they may be formulaic, the sheer size of the environments means that they can take some time to figure out. They usually revolve around collecting keys or other items to activate mechanics in another part of the level, and while you will have to cover a lot of ground to solve them, they're all logically put together. It helps that Lara can now access a tips system from her PDA, with two levels of assistance available to clarify any befuddlement. Press the A button and Lara will give you a hint on what you need to do next; press Y and she'll be more explicit about your goal. The new map is less successful--Lara's expensive (and curiously waterproof) PDA provides a wireframe model of the current area you're in, but this is useless when trying to backtrack through numerous underground caves.

Tomb Raider Underworld is an enjoyable adventure, but it's one that's just too familiar for anyone who's played the previous games. The basic problems with clipping and the unruly camera are still annoying, and while Lara's new abilities add to her impressive athleticism, the route through most levels is still rigidly linear. The AI and combat are also weak, and while fighting is a relatively small part of the game, Underworld would arguably be better without it. That said, the environments are stunning, and working your way through the many different challenges is still as enjoyable as ever. Ultimately there's still life in the Tomb Raider series, but as the title suggests, it may be in need of another resurrection. 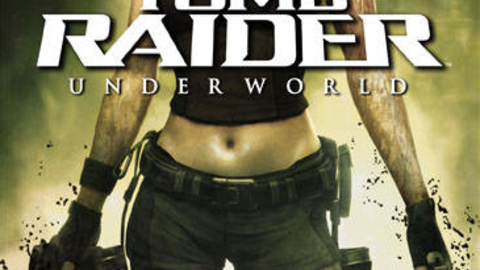