Tomb Raider Chronicles is a worthy enough "sequel" to the original and can deliver an adequate number of thrills, though nothing unique or surprising.

Five years ago, when most games were making their first tentative steps into the third dimension, the fully 3D worlds of the original Tomb Raider and Super Mario 64 were a revelation. Since then, the fact that we've seen four new editions to the Tomb Raider line - each with the sort of incremental upgrades customarily found in sports game series like EA's Madden and Sony's GameDay - in a such short time has ultimately robbed the property of any sort of excitement.

Still, you can't help but believe that there are tens of thousands of game players out there just waiting for word that it's all clear - it's safe to come back to the Tomb Raider series, it's as fun as it was before. And the truth is that there actually is some glimmer of that original shine to be found here. Even if the gameplay in Tomb Raider Chronicles is essentially the same as that of Tomb Raider: The Last Revelation and the others, the game is solidly made, and many of the rough edges found in the series' earlier incarnations (problematic camera angles, touchy control, and so on) have been smoothed.

The premise of this year's model is that our heroine, Lara Croft, is missing and presumably dead, but that doesn't stop her from appearing in flashback form. After her memorial service, several of her friends gather at Croft Manor to recount tales of her adventures, which you then play. One episode places her in Rome; another on a Russian nuclear submarine, hunting for the fabled spear of destiny; another in the moors of Ireland; and another still in a fight against the storyteller himself.

While Ms. Croft can still be found running, jumping, climbing, and shooting exotic animals, the game's puzzles have moved away from shoving blocks around and closer to using stealth. This stealth element is nowhere nearly as developed as it is in games like Konami's Metal Gear Solid or Activision's Tenchu, though. For instance, in one case, Lara has to quietly walk up behind an enemy, choose a crowbar out of her inventory, and brain him. As such, it's not very gripping and could have been far more developed, but it ends up as a nice minor break from the norm at the very least. The mainstays of the series - puzzles in which you need to perform a series of complex jumps, climbs, and long distance runs in a short period of time - are its real focus, and elements such as tightrope walking and target shooting have been thrown in for good measure.

A big part of the Tomb Raider fans' disillusionment with the series is its incredibly tough difficulty level. Stages in the games often contain sections that go beyond being challenging and present trials that are so hard that once you accomplish them, they provide you with a feeling of relief that you'll never have to go through them again. Tomb Raider Chronicles, though, is a little less difficult than previous games in the line, making it one of the more playable Tomb Raiders in years. It's still an evilly tough game that will require regular peeks at a walk-through, but you won't need to sit with the guide on your lap this time. (Audio cues that chime in with hints when you dally in an area too long would make the series much more appealing to mainstream audiences again.)

Regarding the PlayStation version specifically, the graphics look better than ever before. The environments in the first Tomb Raider were very sparse and bland, but over the years the developers have been able to squeeze more and more out of the PlayStation. For a game on an aging system, there's a surprising degree of detail in Tomb Raider Chronicles - without a significant sacrifice of level size. The textures do appear somewhat muddy, but their variety and appearance are still impressive. On the control front, it's no wonder that that Tomb Raider was originally designed for the PlayStation controller. It's incredibly smooth and makes the Dreamcast control configuration - which is more than adequate - seem clunky by comparison. Save for the graphical and control differences, the game is an exact duplicate of its Dreamcast counterpart.

If parallels between the movie and game industries exist, then they should be readily apparent with Tomb Raider. If you are a big fan of a film, you'd probably enjoy a sequel that comes out the following year and treads on similar ground. But five like-minded films over a span of five years is a lot to ask from even the most reverent fan. The problem with such tried and true formulas - whether they exist in Hollywood or in Silicon Valley - is that they quickly become formulaic, and never has this been more obvious than in Eidos' Tomb Raider line. If you haven't played a Tomb Raider game in years, however, Tomb Raider Chronicles is a worthy enough "sequel" to the original and can deliver an adequate number of thrills, though nothing unique or surprising. 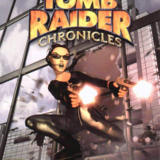