If you've played any previous version of Tom Clancy's Splinter Cell, and you've also played games for the Game Boy Advance, then you know full well that Ubi Soft's best-selling 3D stealth action game wouldn't easily translate to Nintendo's portable platform. But Ubi Soft translated it all right. That being the case, Splinter Cell for the GBA turned out surprisingly well. It's a side-scrolling 2D action game, reminiscent of platformers and side-scrolling shooters from the 16-bit era, yet it borrows the premise and many gameplay elements from the core versions of Splinter Cell. However, the game somehow preserves some of the original's frustrating qualities, and it's also short and pretty repetitive. Nevertheless, this version of Splinter Cell is a good enough game on its own merits to tide over Splinter Cell fans looking for a portable version or GBA owners looking for a briskly paced game to have on the go.

Splinter Cell for the GBA essentially is a retelling of the original game: You play as Sam Fisher, an ultrasecret government commando working for an organization that operates above the law, sending its agents into dangerous situations in the name of national security. Fisher must rely primarily on stealth as he works his way, alone, to the heart of heavily defended enemy compounds. Unless you've played the original, you'll have trouble comprehending the disjointed plot of the GBA version, which gives you a page of text as a preface to each of the game's nine missions, and that's about it in terms of the storyline. No matter, since this is a pure action game anyway, and it doesn't really need a story to tie together its scenarios. Nevertheless, some more context for the various objectives in the game would have been welcome.

As in the original, in Splinter Cell for the GBA, the object of most sequences is to try to get to the end while avoiding detection. Since this is a side-scrolling 2D game, though, obviously you can't just maneuver around your enemies. So the stealth mechanic boils down to monitoring the fixed side-to-side patrols of enemy guards and walking up behind them and bopping them on the heads while their backs are turned. The right shoulder button functions like a telescopic view, allowing you to scroll the screen in any direction and thus see farther than your enemies. Time is almost never a factor, so you can inch your way through most levels, playing it safe. Enemies come in a few varieties, but all are pretty stupid and have lots of trouble fighting you toe-to-toe. Security cameras pan from side to side, slowing your progress as you avoid their arc by sneaking under them as they're facing the opposite direction. Locked doors and safes and, later, automated sentry guns will sometimes bar your passage, but these can all be disarmed via a slightly different lock-picking minigame in each respective case. Splinter Cell for the GBA also has some basic platforming elements in it, which are made obvious right in the first level, where you'll have to leap from one vertical pipe over to the next, trying to avoid dangerous objects in the environment--searing flames, in this case.

There's a pretty good amount of variety outside of the core gameplay. Sometimes you'll be rappelling down buildings, trying to avoid detection by the guards passing each windowsill. In another sequence, you're chasing a hacker who's desperately trying to escape. Another scene has you fleeing a sinking ship, while another puts you in a food processing plant, jumping from meat hook to meat hook. Plus, there are a few first-person sniping sequences, which make for a nice change of pace.

The thing is, most every gameplay element in Splinter Cell can qualify as a "nice change of pace" at best. No part of the gameplay is particularly satisfying, not even the core sneaking. You can duck into shadows to avoid patrols, but this rarely comes into play. You can't pick up and drag bodies, but guards will flat-out ignore any unconscious bodies along their patrol, so it doesn't matter. There's a good reason why most 16-bit side-scrolling action games emphasized pure action instead of stealth--it's just more fun to go blasting through a bunch of bad guys than it is try to tiptoe up behind them and bop them on the head. As if to add insult to injury, in Splinter Cell you're always very low on ammo for your pistol (for game balance reasons, since the pistol lets you easily dispatch any enemy from afar), and you don't even get to use Fisher's signature SC-20K experimental rifle, except in the sniping minigame. So, only because Splinter Cell does have some variety to it will the game hold your interest even for the short five hours or so it'll take you to finish. It's not a long game by any stretch, but even still, Splinter Cell's length is padded out by repetitive level design and some trial-and-error sequences that you'll inevitably fail a number of times before you even figure out what's going on.

All this isn't to say Splinter Cell for the GBA is poorly done. On the contrary, it's quite well executed given the developers' constraints of having to bring the original Splinter Cell's gameplay into a side-scrolling 2D format. If anything, it's too bad the developers were limited by this design, as the stealth elements hurt the pacing here more often than they create suspense. This game probably would have been more fun as a pure shooter. Give Fisher his SC-20K and fill the screen with bad guys, stealth be damned.

The original version of Splinter Cell received much praise for the quality of its visuals, and though the GBA version can't be expected to measure up in this regard, it does look impressive for a portable game. Fisher animates smoothly, especially while walking, running, and drawing and holstering his pistol. A few animations, such as when he pulls himself up onto a ledge, look a little choppy, but for the most part Fisher looks great in action. He's even got his combination night-vision/thermal-vision goggles, complete with graphical effects reminiscent of the original game, though the device doesn't come into play often. The environments in the game also look good, though the predominantly industrial settings of the game didn't leave the artists much room for creativity. Meanwhile, the game's audio is solid and mostly consists of a smattering of sound effects sampled from the original game, such as for when Fisher draws his gun or clambers across a hanging pipe. Bass-heavy music drones in the background, helping establish the mood. On the other hand, for some reason your enemies all exclaim "Hey!" when they spot you, even though they're supposed to be foreign.

There are a few unlockable bonus missions in the game, and still more can be unlocked by those who link up the GBA and GameCube versions of Splinter Cell. But chances are, by the time you've finished the core missions, you'll have had your fill of the game's formula, as well as its little diversions like the lock-picking and the sniping. It's all mostly fun while it lasts, though. Splinter Cell for the GBA is ultimately a good effort at trying to capture the original game's suspenseful gameplay in a 2D side scroller--making for a different sort of action game--as well as a pretty faithful adaptation of Splinter Cell's original design. But it's of average quality overall when measured against the numerous outstanding side scrollers of the 16-bit era, many of which are available either true to form or spirit for the GBA. 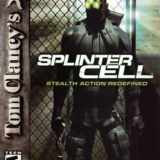