This set of sophisticated maps is a must-have for Splinter Cell: Conviction fans.

Splinter Cell: Conviction's first substantial downloadable add-on may be "just" a map pack, but boy is it a good one. In fact, if you enjoy Conviction's excellent cooperative modes, the Deniable Ops Insurgency Pack is a must-play. These four standalone missions are even better than those included with the main game, filled with numerous nooks and crannies in which to hide, winding pathways and corridors useful for flanking, and dramatic opportunities to bring down your vocal foes. Those occasionally dimwitted enemies can get confused in these intricate environments, but bewildered combatants and other minor complaints only slightly soften the impact of this excellent addition to Conviction's outstanding co-op play. This pack may sell for 800 Microsoft points ($10), but it is too good for Splinter Cell fans to miss.

Like the maps that shipped with the main game, the Insurgency Pack's maps are extensive three-part levels that you can use in Face-Off, Hunter, and Last Stand modes. (And as in the main game, you will enjoy the latter two modes in single-player as well as in two-player co-op.) The missions are set in four distinctive American cities--San Francisco, New Orleans, Salt Lake City, and Portland, Maine--and all four do an impressive job of bringing the spirit of those cities to Conviction's stealth/action gameplay. For example, the last stage of the San Francisco map takes place on a bayside dock cluttered with cranes, crates, and pulleys, a sight you would reasonably expect to see at that city's piers. The Portland map opens with a nighttime glimpse of Maine lighthouses and a sojourn through a courtyard and into the bowels of a prison. These areas and the others (a New Orleans mausoleum and a Salt Lake City laboratory are particular standouts) are brimming with dark shadows, winding pipes, alternate staircases, and creepy crawlspaces. The spotlight is on Conviction's cooperative flexibility. These maps are more complex than you may have expected, leaving you plenty of room to decide how to take down your enemies. You could leap onto the shipping containers and shimmy around them in the San Francisco level, for instance, or hide under enormous industrial vehicles and pick off your enemies one by one. And this flexibility leads to awesome moments characterized by the excitement of a well-timed dual execution, or a narrow escape from a tense showdown.

Even Conviction's lone competitive mode, Face-Off, shines in this new content. Here you might miss the delights of co-op play--dual executions, rescuing your teammate from choke holds--but the complexity of these maps enhances the tension when you have another player stalking you. Because there are so many places to which you can escape, heading toward the ghostly image indicating your opponent's last known position could turn you from hunter into the hunted: he or she may very well be waiting to ambush you, using that ghost as a lure. You'll still get quite a bit of bang for your buck even if you just intend to explore these maps on your own. Solo Hunter mode can get intense in the more claustrophobic areas, particularly if you break stealth and reinforcements stream onto the map. Unfortunately, whether you play on your own or with a friend in tow, your computer-controlled opponents seem to have a tougher time in these elaborate setups. You can occasionally use choke points to take down enemies one by one as they barrel down hallways, oblivious to the rising pile of bodies directly in front of them.

Any other nit you could pick with this add-on--the way the black-and-white effect might make it difficult to see what's going on, for example--is a carryover from the main game and barely affects the incredibly high quality of what's on offer here. The Deniable Ops Insurgency Pack is a tremendous bit of downloadable content, and a great reason to make Splinter Cell: Conviction your go-to cooperative game. 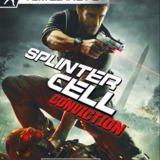