This arcade-style aerial-combat game has plenty to offer those flying solo, but it doesn't offer much in the way of competitive multiplayer content.

After tackling squad-based third-person combat in Ghost Recon, stealth action in Splinter Cell, and strategy in EndWar, Ubisoft's Tom Clancy brand takes to the skies in HAWX (High Altitude Warfare--Experimental). The game features intense dogfights, gorgeous scenery and planes, and an instantly accessible, arcade-style air combat experience. Multiplayer options are limited, and different planes don't offer as much variety as they should, but HAWX lives up to the quality of the brand and is a good aerial-combat game in its own right.

HAWX follows the story of the titular squadron and its leader, Major David Crenshaw. After you're transferred to HAWX as squadron leader, the group is disbanded by the US Air Force in 2014, following events in the Ghost Recon Advanced Warfighter games. (You get the cool task of rescuing Captain Mitchell and the Ghosts in the first mission of the game.) After this, Crenshaw joins Artemis, a private military contractor that works both for corporations and the Brazilian government. Artemis attacks US forces, causing Crenshaw to have a change of heart and goes back to what he does best: defending the US against hostile forces, namely Artemis. HAWX's story, like those in other Tom Clancy games, is presented via cutscenes, radio chatter, and video updates. The story is largely inconsequential, but it sets the scene well enough for your numerous engagements and keeps the game moving along at a brisk pace.

HAWX is instantly accessible and is a lot of fun to pick up and play in short bursts. The controls are uncomplicated and work well enough that even issuing orders to wingmen during a dogfight is easily accomplished. One of the major gameplay innovations in HAWX is the Enhanced Reality System. ERS is essentially a series of gates projected onto your heads-up display that, when you fly through them successfully, let you shake missile locks or catch up to challenging enemies. For example, in one mission ERS helps you fly a predetermined course to avoid radar detection, which in turn lets you knock out a base's air-defence grid. There are a number of scenarios in which ERS proves useful, but thankfully it's not a system that you can use as a crutch to get you through every single mission.

The ERS definitely makes portions of HAWX significantly easier than they would be without it, so for the experienced pilots among you, there's an option to fly with all of the assistance turned off. Unlike similar options in racing games, the assistance option can be toggled on the fly by double-tapping one of the triggers. When flying without assistance, you can perform sharper turns to avoid missile locks, but you're more susceptible to stalling if you brake too hard. In this mode, the camera angle switches to a wider view of the landscape, which affords you a better view of your current target and incoming missiles. However, because the camera is constantly moving, it can be a bit disorienting and makes controlling your plane even more difficult. HAWX's gameplay is fast-paced, frantic, and ultimately satisfying. It's easy to get swept up in the tense saga while dogfighting over famous cities and picturesque landscapes, and there's enough variety in the missions that the action never gets stale. Dogfights are nothing like bombing runs, and escorting a friendly VIP is a quite different challenge compared to defending a base. There are 19 missions in the single-player campaign, spanning multiple continents that you'll visit both in daylight and at night. Locales include famous city skylines such as Washington, Tokyo, and Rio de Janeiro, as well as remote areas in Nevada and the Magellan Strait.

HAWX is an arcade-style game rather than a simulation at its heart, which is why your payload can include upward of 100 missiles for each mission. As you progress through the story, the odds against you become increasingly steep, as enemy aircraft are joined by ground and naval forces and antiair defences become more common. Thankfully, you have a large and varied arsenal at your disposal that includes long- and short-range missiles, antiground "dumb" bombs, cannons, rocket pods, and countermeasures. Though it would be unrealistic for a small, single-seater jet to carry that much firepower in real life, it's a triumph of gameplay over realism that in HAWX you can stay in the heat of battles without ever needing to land and resupply.

HAWX rewards you with dozens of unlockables throughout its campaign. Licensed planes include the iconic F-22 Raptor, the stealthy F-117 Nighthawk, the devastating A-10A Thunderbolt II, and other models from the likes of MiG, Eurofighter, and Saab. There appears to be no shortage of variety in the hangar, but the handling of the planes doesn't change much when you move between cockpits, which is disappointing. Despite the fact that HAWX is set in the future, you earn your stripes flying older fighter jets before being allowed into the cockpits of more modern aircraft in later missions. Despite the High Altitude Warfare--Experimental acronym in the title, there are no experimental fighters in the game, and most of the warfare takes place just a few thousand feet above ground. That doesn't make the game any less enjoyable, though, and flying over famous landmarks in an F-22 without having to worry about throttle gauges and limited ammunition is a real treat.

Many of HAWX's missions group you with a pair of wingmen. You can order your comrades to attack targets or to concentrate on defending you, but they're not always reliable and you certainly shouldn't expect them to get much done without your help. At best, they'll destroy the occasional enemy unit, but you still have to do the majority of the work in each mission. You can also fly with your friends in the four-player cooperative mode, which definitely makes the campaign more rewarding. You can drop in or out of an existing co-op game at any time, and though the gameplay remains the same, it's much more rewarding to devise strategies and coordinate with real people than it is with AI wingmen.

HAWX's competitive multiplayer offering is also fun, but it's limited to just one eight-player Team Deathmatch mode. Multiplayer battles take place in a good selection of 19 maps based on those from the campaign missions, and it's far more satisfying to take down a human opponent than it is an AI pilot. Furthermore, if you string together a number of kills in succession then you gain access to special abilities such as an enemy-stalling EMP blast, which is a nice touch.

From a distance, the environments--which are created with real satellite data--look beautiful. Natural landscapes and expanses of water are incredibly lifelike, and city skylines are nicely detailed. But if you fly too low, the illusion is shattered. Trees look rough and pixelated, and Chicago's skyline might as well be a collection of cardboard boxes on close inspection. The planes are the game's stars, and each one is modelled realistically with great attention to detail. Light bounces off of wings, afterburners glow with blistering heat, missiles launch in clouds of smoke, and explosions serve as a gorgeous reminder of just how much power you have at your command. The frame rate occasionally takes a hit when there's a lot of action onscreen, but for the most part the engine holds up extremely well. Realistic sound effects add a great deal to the presentation; slow jet burns give way to intense growls as your speed increases, and the various beeps and buzzes associated with missile locks really add to the feeling of being an ace pilot.

Tom Clancy's HAWX is a rewarding arcade aerial-combat experience that looks and sounds every bit as good as it plays. The controls, and in particular the ERS innovation, make dogfighting in iconic planes over famous cities as accessible as it is enjoyable. It's unfortunate that the multiplayer options are so limited and that the various aircraft all feel very similar to fly, but there's lots of fun to be had here for novices and top guns alike. 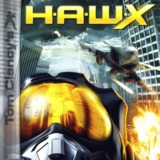