Tokyo Jungle's great concept and good sense of humor end up being little more than lipstick on a pig.

It has always been a dog-eat-dog world out there. But when humanity disappears and animals are left to fend for themselves, the streets of Tokyo become a far more savage place, where former house pets must learn to hunt and kill much larger, more deadly animals to survive. The concept may sound grim, but Tokyo Jungle brings enough humor to its vision of the post-human streets of Shibuya to make the whole scenario pleasantly silly. That humor only goes so far, though; repetitive gameplay and frustrating difficulty issues make Tokyo Jungle an underwhelming glimpse at the future of the animal kingdom.

There are two modes of play in Tokyo Jungle: survival and story. In survival mode, you choose one of the animals you've unlocked and make a go at living on the rough-and-tumble streets of Shibuya. You roam dilapidated neighborhoods, hunting or grazing to survive as your hunger meter rapidly dwindles. You also mark your territory and mate before old age takes its toll. Years pass at a rate of one a minute, so you can't play as any one animal for too long. Therefore, it's in your best interests to improve your animal's stats as much as possible in a short period of time so that you can pass better qualities on to the next generation.

After you've marked certain spots in a neighborhood, you can mate there, though the quality of your mating partner can depend on your experience. If you've ranked up your animal sufficiently, you might entice a "prime" mate or at least an "average" one. If you haven't, you may have to settle for a mangy mate, and get the periodically paralyzing fleas that come along with such a prospect. Repeating the process of ranking up your animal, marking territory, and mating every 10 or 15 minutes quickly becomes a relentless, unrewarding grind.

You improve stats by completing challenges, which provide you with goals like killing a certain number of animals, eating a certain number of calories, or heading to a certain neighborhood. You can also find and equip gear that comes with stat bonuses. You might give your golden retriever a spiffy baseball cap or deck out your cat in a provocative pet bikini, bringing both a sense of style and a sense of humor to your gloomy plight.

Among the challenges available to each animal in survival mode are those that unlock other animals. To unlock cats, you must venture into a territory overrun with cats as a Pomeranian and reclaim it. To unlock golden retrievers, you must defeat the boss of the golden retrievers while playing as a beagle. The opportunity to unlock and play as a wide assortment of animals as you make progress in survival mode may seem like it would keep this mode fresh for quite some time, but the same simple challenges surface again and again for every type of animal, and usually the animals you unlock play almost exactly like the animals you used to unlock them.

As you roam the streets of Tokyo, you encounter a variety of other animals, some of which you can probably easily kill, and others you're better off trying to avoid. Combat is shallow. When an animal doesn't know you're there, an icon appears indicating you can pull off an attack that will likely kill your prey. There's some entertainment value in seeing a little Pomeranian fly through the air and kill a hyena with the savage grace of a cheetah pouncing on a gazelle in the wild, but soon, the simplicity of pulling off these kills prevents the process from being satisfying. Combat isn't much better when your enemies know you're there. You pound an attack button, do a quick evasive maneuver when your enemy is about to strike, and then go in for the one-button kill.

Tokyo Jungle has some basic stealth mechanics, but sneaking around the streets of Shibuya is anything but suspenseful. You might get spotted even when you think you're being sneaky--it's hard to get a good sense of just how far other animals can see and what might alert them to your presence. Once you've been spotted, you can try to lose your predator by running and hiding in some tall grass, but it's not clear how far ahead of your pursuer you need to be for this to have a decent chance of working. And you might find yourself cornered when trying to escape; the map doesn't make it clear which obstacles in the road can be passed and which can't, and invisible walls sometimes prevent you from moving in a certain direction. Rather than generating tension and rewarding your sneaking skills, the whole stealth aspect of the game just feels chaotic.

So, too, does the world around you. At times, this leads to entertaining surprises. You never know what sorts of animal battles you'll stumble upon when you go to a new neighborhood. You might enter an area and see a flock of sheep stampeding from hungry jackals, or come across horses, hippos, and hyenas mixing it up in the streets.

This lends the world an enjoyable liveliness, but this seeming randomness can also bring about a sudden, unexpected end to your life. You might mate in a safe neighborhood and then take over the next generation to discover that a deadly crocodile is right outside your nest. Particularly when visibility is low as a result of rain or other factors, you might be leading a pack of pups down a street only to find yourself face-to-face with a panther or other predator who ends your life with a single swipe. Opportunities to save are infrequent, so death often means losing a good deal of progress, and you can have only one save at a time. Each time you want to start survival mode as a new animal, you have to overwrite any progress you've made as the previous animal.

By finding archives in survival mode, you unlock new chapters in story mode, and this is where the game lets the silliness inherent in its concept run wild. One chapter has you forming an underground resistance of beagles to retake territory from a canine warlord and his troops. Another sees you leading a lioness in combat against a boxing kangaroo and his rabbit assistants. But these chapters often have their own frustrations, putting you in situations that require trial and error to succeed. For instance, a checkpoint race to mark territory and return to base before a rival does might take a few tries before you work out a viable path--once again, the map is not much help--and a chapter that starts off with you being attacked by a pack of enraged beagles might see you getting killed before you even have a chance to escape from their clutches.

On top of everything else, Tokyo Jungle's music is gratingly repetitive, and the visual design of the animals makes them look hollow-eyed and creepy. Sure, there's novelty value in a goofy game that sets you loose in a city overrun by savage animals. News bulletins in this strange new world inform you that "the giant Bunny of Legend has come to Yamanote Line East" or that "dog-monkey relations have soured." You've never played a game with a concept quite like that of Tokyo Jungle. But underneath the amusing exterior, this is just a game with shoddy stealth mechanics and gameplay systems that keep you doing the same simple things over and over again. It's almost hard to believe, but Tokyo Jungle makes experiencing the rich circle of life on the streets of Shibuya a drag. 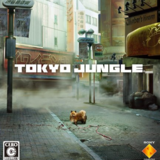