Whether you remember ToeJam & Earl or not, this is a good, solid two-player game that's worth checking out.

ToeJam & Earl was a pretty weird game back in its day, and when you remove it from those carefree 16-bit days, it feels even weirder. As two hip-hop-loving aliens, you'll have to avoid evil earthlings like little devils, hula dancers, bees, and evil dentists while trying to find the pieces of your spaceship so you can escape back to your home planet, Funkotron. But in this case, "weird" doesn't mean "bad." This game was "fresh," or perhaps even "def," back when it was released in the early '90s, and while its lingo and attitude are most definitely dated, it's still a lot of fun, especially with two players.

The game itself is almost like a dungeon-crawl, in an entirely different-looking environment. The levels are randomly generated (in the main mode, anyway), and you need to scour each level in search of items, including your ship pieces, while being on the lookout for enemies. The items you collect are presents, and at the start of the game, you have no idea what any of the presents do. But when you open a present and discover what's inside, you're guaranteed that all the other presents that look the same have the same contents. The presents can help or hurt, depending on what you get. Tomatoes can be thrown at enemies. A decoy present directs the enemies to huddle around your decoy, letting you skittle away to safety. Rocket skates give you a nearly uncontrollable boost of speed that is usually a real nuisance. There are a good number of different presents in the game, and figuring out what they all do is a key part of the game.

While the game plays fine when you're alone, it's also a really slick use of split-screen when you're playing with a friend. The screen splits when you separate, and rejoins when you venture into the same section of a level. Also, any presents that are used when you're both on the same screen affect both players.

The effects and music in ToeJam & Earl were pretty cool back in 1991. While that FM synthesizer inside the Genesis was put to effective use on the bass lines and other parts of the music, a lot of the drums and other sounds were digitized, giving the game the sound of an old drum machine. If you want to just drop a beat, there's a jam-out option that plays the music from the game sans drums, so you can hit buttons to play the drum samples yourself.

The original ToeJam & Earl still holds up pretty well today, and while it's not the most famous game in the world, it's definitely a classic. It's unfortunate that the sequels weren't anywhere near the original in terms of fun and quality, but at least we'll always have the original game, and with the Virtual Console, it's never been easier to go back to the beginning. 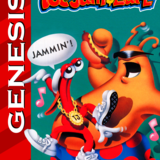 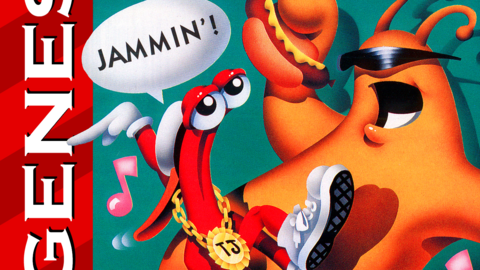