Cool power-ups and a lot of charm make TNT Racers a bunch of shallow fun.

Demolition derbies and time trials are the highlights of TNT Racers, a pick-up-and-play kart racing game heavy on action but light on reality. This Xbox Live Arcade game is old-fashioned arcade racing, with loads of souped-up jalopies, lots of power-ups that can be used to make the bad guys go boom, and enough speedy race circuits to keep your trigger finger on the gas for a fair number of hours. A few issues with missing-in-action online multiplayer might cause you to hit the brakes, but Keen Games still gives you some very good vroom-vroom gaming for your 800 Microsoft points.

TNT Racers is a straightforward arcade kart racer. Rides are picked from a fairly short list of vehicles, such as old-time jalopies like Archie used to drive around Riverdale, and sporty autos out of The Fast and Furious. All the cars have varying strengths when it comes to such things as speed and handling, although the physics are so arcade friendly (you rarely have to take your finger off the gas) that all pretty much perform the same. The solo part of the game consists of challenges split into normal, fast, and turbo difficulties that you race through in order. When you win one race, you unlock the next. The few dozen or so races in these circuits consist of a hodge-podge of straight time trials; demolition derbies where you score points by collecting coins and blowing up opponents with various power-ups; and special affairs where you either destroy obstacles or avoid them. A total of 18 courses take you from the tropics to deserts to icy wastelands. Everything is mixed up when it comes to race objectives and maps, so you rarely fall into a rut. In one race, you're running laps blowing up cacti in a windblown desert; the next, you're taking on enemies insistent on knocking you off creaky wooden bridges in a Mayan jungle.

So there aren't a whole lot of surprises here. But even though TNT Racers doesn't offer much innovation, it is still an inspired knockoff. Racing is predictable and fairly shallow, without a lot of real variation in how races play out, but for 800 points, you certainly get your money's worth. Races are very fast, with rounds sometimes ending in mere seconds because any car caught off the bottom of the screen instantly goes boom. This doesn't mean that you turn into a spectator, though; in most races, you instantly resurrect as a ghost car with the ability to play spoiler and smash up opponents. Tracks come with a lot of hazards where you can slide off ice into water, careen into canyons, and roar into walls. AI drivers have great chops, as well. They excel at staying on the track and do everything possible to force you off the bottom of the screen.

Power-ups are well balanced and varied. There are more than a dozen of them, including mundane speed bursts, repair kits, candy cannons, confetti bombs, a giant hammer that shakes the entire screen, cartoon weights attached to plungers, and even an inverter that flips the entire course. Everything is useful, yet nothing is overpowered to the point where you can mop up the track. All have real strategic use. If you're behind, the cannon or the plunger can be of great help to take out or slow down the front-runners. If you're ahead, deploying confetti mines can do a real number on pursuers. At other times, you're best off dumping a power-up because you're faster without one onboard. And you have to watch out for power-ups being used against you. AI drivers know what they're doing with them, and never hesitate to lay down bombs when they're leading the way or deploy the earthquake hammer when you're vulnerable to being knocked into a canyon.

The game also packs a lot of charm. Visuals are blocky, but they're nicely cartoonish and varied when it comes to the vehicles and race courses. The scenery is also spiced up with little graphical touches like palm trees waving in the foreground and monkeys running around outside of the tracks. One issue with the graphics, however, is the location of the top-down camera on some tracks. At times, it's way too close to the action, zoomed in so tight on the cars that you can't get any perspective on the curves or upcoming obstacles. Courses aren't so big or hazardous that this causes any serious problems, but a default camera setting pulled back or angled a bit would improve things. Music is superb, if a little out of place. The entire game has been scored with hot jazz numbers straight out of the Roaring Twenties, as well as some cornball cartoon chase music. You can't help but tap your toes to the beat, even if you're wondering how on earth tunes from a speakeasy wound up as the accompaniment for a racing game where you zip around jungles and deserts blasting baddies with candy cannons.

One drawback is that tumbleweeds seem to be blowing through the servers. Very few people are playing TNT Racers online right now, making it just about impossible to hit Live and randomly hook up with opponents. Even when you can find some rival racers, you usually wind up with at least one incredibly skilled computer driver subbing in to fill out the field. That's a real shame because the zany mayhem here really lends itself to multiplayer, and matches are smooth and lag free when you can find them. The developers have also set things up for a healthy online experience, with support for one-off races of all types, as well as tournaments. You pretty much get your $10 worth out of the solo challenges and local multiplayer alone, although anyone who really values online play should think twice before pulling the trigger on a purchase.

Although TNT Racers can be accurately categorized as an arcade racer in the mold of classics like Micro Machines, it is not a cheap rip-off. Zippy cars, challenging tracks, tough AI opposition, and a lengthy list of cool power-ups make it a catchy racing game with just enough of its own personality to keep you coming back for more. 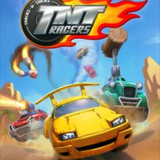