A wrestling game shouldn't be about wrestling with the controls.

It may have taken two years for the portable versions of TNA Impact to finally make it to launch following the console release in 2008, but don't expect to find many improvements or major changes in this handheld port. The extra time in the oven hasn't made a real impact on pinning down and beating into submission the problems that kept the series debut from being the tour de force TNA wrestling enthusiasts had hoped for. Staying faithful to the machismo drama and intense man-pummeling action of TNA just isn't enough when the gameplay so readily degenerates into repetitive and frustrating button mashing. Context-sensitive control issues and bastardly enemy AI also take a lot of wind out of the game's testosterone-powered sails.

On the PSP, Cross the Line has many different exhibition modes that let you quickly hop into the ring and brutalize your opponents to your heart's content. However, you'll first want to pummel your way through Story mode to unlock the bulk of the game's 50-plus wrestlers, since only about a third are available from the get-go. In Story mode, you play as Suicide, a successful wrestler who fights his way up the wrestling circuit ranks for a chance at the TNA title in a major televised match. After being approached by rival wrestlers who threaten him to throw the match, he decides to curb-stomp his opponents anyway. Ticked off by the victory, Suicide's rivals brutally attack him after the match, beating him within an inch of death and leaving him bleeding in a Tijuana alley. With his memory fuzzy and his face reconstructed by plastic surgeons, Suicide gets back into the ring south of the border and begins his ascent back up the wrestling circuit ladder. The story itself is pretty straightforward wrestling drama fare that plays out through a mix of static sequences and nicely animated cutscenes. Not everyone will enjoy being railroaded into playing a canned story as a single preset character rather than starting a custom wrestler from scratch--a fairly standard option that's noticeably absent here. However, the visuals both in and out of the ring are crisp, and the hard rock soundtrack does a good job of keeping the adrenaline flowing.

When plowing through the main Story mode, you'll bludgeon through match after match using the same core movesets against a rotating medley of opponents in different arenas. Cutscenes break up the pacing a bit, but there's otherwise very little to be concerned with beyond pummeling your next batch of opponents into submission and moving on. Match types do change up every so often, offering a good mix of one-on-one, tag team, and free-for-all encounters, among other configurations. The default difficulty offers a steep challenge that feels too unforgiving at times, particularly when you're stuck facing a string of multiple opponents in the same match. As your ripped foes get tougher, their aggressiveness and stamina increase dramatically, and all enemies in general seem to have an uncanny knack for effortlessly pulling off counter moves that turn your own attacks against you. It's a shame that doing the same to them is all but impossible with the inconsistent controls.

At a glance, Cross the Line features a solid variety of attack moves to unleash on opponents. You can dish out normal or stronger punches and kicks, grapple opponents and throw them to the mat, dive at them off the turnbuckle, deliver punishing suplex moves, brutalize them when they're prone, and even trigger special impact attacks and finishing moves. A handy damage indicator shows various areas of your opponent's body that change color as you injure him, tracking the success of your efforts. Unfortunately, far too many of the attacks are context sensitive and rely on proper positioning and timing to be wielded efficiently, which is problematic when you're in the middle of a frantic bout against a tough opponent who is quickly adapting to your attack patterns. Some buttons also produce different variations on key attacks depending on which directional button you're hitting or whether you hold the left shoulder button. Since your main attacks rely on punches, kicks, or grapples, fending off the aggressive AI during intense matches tends to readily devolve into repeating the same handful of quick, easy-to-execute attacks. For whatever reason, it's also quite challenging to master the proper timing and positioning needed to counter incoming attacks.

When things heat up during a match, it's not always easy to quickly recall which combination is necessary to execute a specific move. Moves you're attempting to pull off also change depending on whether you're near the edge of the ring, on the ground, or walking or running. The most egregious example of the game's contextual move issues arises when you're using the circle button. At different times, tapping the circle button alone makes you pin your opponent, climb the turnbuckle, pick up a weapon, or slide in and out of the ring, depending on where you're positioned when you hit it. It's easy to accidentally trigger some unwanted actions when you're trying to tackle an opponent or escape his grasp. The game also doesn't do a great job of handling transitions when you (or your opponent) are getting back on your feet after lying on the mat.

Exhibition mode lets you pick from a wide range of available wrestlers, both real and fictional, and jump into the ring in a number of different match types. In addition to the standard one-on-one, tag team, and free-for-all matches, and numerous other match variations, you'll find a few other cool options. Full Metal Mayhem throws metal chairs and wooden planks into the mix, and the Super X Cup puts you in a series of individual matches against 16 players to determine who the biggest badass of the bunch is. There are also Ultimate X matches that have opponents climbing the turnbuckle, scaling the scaffolding, and trying to bring down the X hanging over the center of the ring. On the multiplayer front, you can connect wirelessly to flex muscles against a pal in local one-on-one Ad Hoc matches. Only a handful of the match types are available in Ad Hoc mode, but it's still pretty fun to wrestle human opponents. There are a ton of wrestlers to unlock in Story mode for use in Exhibition and Ad Hoc matches, and you'll find many standby combatants, including Sting, Booker T, Shark Boy, Chris Sabin, and dozens of others. The best addition to the roster is the ability to play as announcers Mike Tenay and Don West, and you can even have them battle each other while they call out the match, which is quite comical.

Cross the Line is enjoyable enough during the moments when everything gels and comes together, but far too frequently the cumbersome and stiff controls get in the way. This port of a now two-year-old game could have been a good opportunity to tighten up some of the gameplay issues from the console release. Instead, it's largely untouched, making it a weak contender among other portable wrestling games. 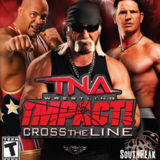 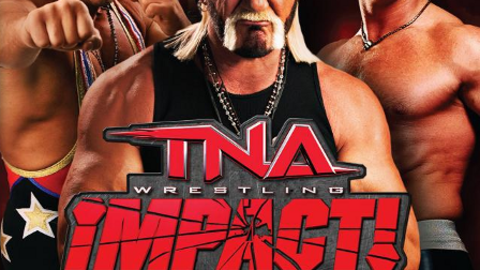 TNA Impact: Cross the Line features an all-star lineup of over 25 of your favorite wrestlers: from AJ Styles to Tomko, Chris Sabin to Sharkboy.

5.6
Sign In to rate TNA Impact: Cross the Line