TimeSplitters 2 may very well be the best split-screen multiplayer-focused first-person shooter ever created.

Back when console technology wasn't quite powerful enough to allow you to play first-person shooters as they were meant to be played, such games used to get a very bad rap on those platforms. Older systems simply didn't have the muscle to make shooters look like they were supposed to, and the lack of online support for consoles meant that players were stuck playing multiplayer matches on a split screen. Rare's GoldenEye 007 for the Nintendo 64 was really the first time a console-specific first-person shooter earned any sort of acclaim--the game had a great objective-based single-player mode, and its multiplayer component was highly configurable. The developer followed GoldenEye with Perfect Dark, which took the same concept into the future with similar results. The original TimeSplitters had a lot in common with those games, due in part to the fact that some of the members of the team at Free Radical had previously worked at Rare. TimeSplitters 2 doesn't stray too far from its legacy, either, focusing more on providing a gigantic variety of weapons, player characters, and modes. As a result, TimeSplitters 2 may very well be the best split-screen multiplayer-focused first-person shooter ever created.

"Multiplayer-focused" isn't meant to imply that TimeSplitters 2 can be enjoyed only by two or more players. While the majority of the fun is to be had in competition with other players, the game does have a rather hefty set of single-player modes. The main mode is the story mode, which attempts to wrap a thin layer of unimportant plot around a basic set of first-person shooter levels. What makes the story mode levels cool is the sheer number of objectives you'll have to complete in each level. You'll start out with only a basic idea of what you'll need to do to finish the level, and along the way you'll uncover new objectives. The time-travel plot is basically the only thing tying the 10 story mode levels together, as you'll basically see completely different enemies, weapons, and player characters from level to level.

Challenge mode is a collection of minigames. Some have you doing silly things, like tossing bricks through windows, while others ask you to defend a room from a nonstop onslaught of zombies. The rest of the single-player component is much more focused on putting you into competitive, multiplayer-style contests against computer-controlled players, or bots. Arcade mode has a large collection of preset challenges and game types to choose from. The league-style arcade mode games have a preset game type, level, number of bots, and list of objectives that must be met to earn a trophy for that particular setup. Getting gold trophies in these modes is the fastest way to unlock new game types, levels, and characters for use in the arcade custom mode, which lets you throw together the available levels, characters, bots, game types, and weapon configurations in any way you see fit. This is also the game's main multiplayer mode.

Arcade custom gives you access to a lot of different variables. First you choose one of the different game types, which include deathmatch, team deathmatch, capture the bag, bag tag, elimination, shrink, vampire, thief, regeneration, leech, virus, flame tag, zones, assault, gladiator, and, yes, monkey assistant. Most of the modes are basic variants on the standard deathmatch concept. Regeneration, for example, is a standard deathmatch, except your health constantly regenerates. Thief gives you points when you collect the coins that appear after killing an opponent, rather than giving you points for the kill itself. Vampire causes you to regain heath when you hit an opponent. It would have been nice if this setup had worked a little bit more like the recent Unreal Tournament's mutators, allowing you to combine, say, team deathmatch with thief and vampire. After picking a game type, you select your level. The game has 16 deathmatch levels, and they can all be used in most game types. Capture the bag, however, only lets you use five of the game's levels. From there, you can set several options, such as how score is kept, what it takes to end a game, how many bots are in the match, and which weapons will be found in the game. From there, you're off and running.

TimeSplitters 2 controls very well on all three platforms. The game defaults to the standard first-person shooter control scheme, using the left analog stick to move and the right to turn and aim. Just like in GoldenEye, you can hit an aim button to bring up a targeting cursor, which you can then move around the screen with the right stick. This aim button is also how you bring up scope views for sniper rifles and so on. The D pad is used to change weapons and control the zoom feature for certain weapons' aim view. You can also duck and reload weapons at will, but there's no jump button to be found in the game. You rarely find yourself looking for the ability to jump anyway, but there are a few short ledges that you'll find yourself wishing you could hop up onto from time to time.

The game has a pretty lengthy list of playable characters. You'll find futuristic troopers, robots, '70s-style dudes, zombies, cowboys, and a bevy of others that cover the span of the game's various time-traveling motifs. Though most of them must be unlocked by playing through the game's various modes, you'll eventually have access to more than 120 playable characters. Each character is rated in three different stats. This can be disabled, though, if you'd like to ensure a level playing field.

TimeSplitters 2 also has a rather hefty list of weapons. While in story mode, you'll stick mostly to weapons that are from the era of the level you're playing. So in the 1990s Russia level, you'll see assault rifles, timed mines, and other fairly modern military machinery. But in the Prohibition-era Chicago level, you'll see significantly older weaponry, such as a tommy gun and an old rifle with a wooden stock. In multiplayer matches, of course, you can customize your weapon set by either going with a preset batch of weaponry or choosing up to five weapons for your match. The selection of standard armaments includes a collection of pistols (each of which can be carried alone or in pairs), a few different shotguns, a couple of different types of sniper rifle, machine guns, miniguns, and a crossbow. There are also a variety of futuristic weapons, such as laser guns, plasma rifles, and the ever-popular sci-fi handgun. A first-person shooter wouldn't be complete without exploding projectile weapons, and TimeSplitters 2 accommodates here as well, with a grenade launcher, rocket launchers in standard and homing varieties, three different types of mines, and, for you Old West types, dynamite. While it would have been nice to have seen a few more crazy objects, such as portable gun turrets or a railgun that could shoot through walls like in Red Faction, TimeSplitters 2 has more than enough weapons to keep you busy for a long, long time.

Stacked on top of TimeSplitters 2's already teetering list of options is a mapmaker that is a slight improvement on the original game's level editor. While it won't let you make gigantic maps or anything, it does let you get pretty complex. You can even create story-mode-like objectives for your maps to give them some extra single-player or co-op appeal.

TimeSplitters 2 is a great-looking game. The action is fast-paced, the levels are well-modeled, and some pretty nice textures can be seen throughout the environments. The game doesn't chop up when you get a fast-paced split-screen game going, and the frame rate remains pretty smooth throughout. The characters in the game are pretty stylized, and seeing, say, cowboys, monkeys, robots, and zombies shooting it out is really pretty hilarious. The game's few cutscenes, which introduce each story mode level, are nicely done and make good use of exaggerated, cartoon-style faces and mouth animation. The game's soundtrack, which consists mostly of standard electronic tracks, fits the action reasonably well. Strangely enough, the Xbox version of the game doesn't contain the ability to use custom soundtracks. The rest of the game sounds very good. All the gunfire is well done, and little touches, such as the sound of bullets ricocheting off nearby walls, add to the sound's immersive effect.

TimeSplitters 2 is all about options. While it isn't a huge, story-driven first-person shooter, it doesn't attempt to meet that goal. Instead it provides a top-notch collection of great modes, great maps, and solid weaponry. While it's in some ways disappointing that such an option-packed and fun multiplayer game doesn't have any online multiplayer capabilities, TimeSplitters 2 represents the ultimate evolution of the split-screen first-person shooter. It does feature link or LAN play for up to 16 players, but true online play would have added a lot to an already great game. At any rate, if you're someone who can't deal with split-screen multiplayer, then TimeSplitters 2 will probably feel like one gigantic missed opportunity to you. But anyone looking for a solid, console-style first-person shooter with enough options to keep you playing for a long, long time will find that TimeSplitters 2 definitely does the job with style. 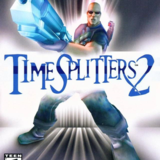