An interesting time-shifting mechanic and fun-to-shoot weapons can't make up for the rest of TimeShift's run-of-the-mill first-person shooter gameplay.

Given TimeShift's long, tumultuous development cycle that saw the game change platforms, swap publishers, and miss several release dates, it's surprising the game has made it to stores at all. So it's too bad that TimeShift isn't really worth the wait, thanks to a barely-there story, extremely rudimentary puzzles, and tired first-person shooter objectives like going through an entire level just to push a button. It does have some redeeming features, though. It's fun to pause time and whale on helpless soldiers, and some of the weapons are really satisfying to shoot.

If you need more out of a game's story than "shoot guys until the credits roll because an angry soldier and a computer voice say so," you're in trouble here. If you piece together the fragmented cutscenes, scour the manual, and read the back of the box, you'll learn that a certain Dr. Krone has stolen a special suit that lets its user travel through time. This has created an alternate reality, which is a bad thing--you'll have to trust the game on that, because it's tough to figure out just what has happened that's so bad, other than a big robot spider that shoots lasers terrorizing the city. (OK, maybe that is bad.) It's up to you to take the other, experimental beta suit (ohhhh, dangerous!), travel through time, and stop Dr. Krone from doing something sinister--which he has already done, so you want to undo whatever it is he's done...or something.

Even though the story is an incoherent mess, it's still possible to enjoy TimeShift. Why? Because you can time-shift. Your suit has the ability to pause, slow down, or even reverse time--kind of like a TiVo you can wear. This lets you pause the action, run up to a guy, and shoot him to bits. Or if you're feeling like humiliating him before you kill him, you can steal his weapon, restart time, and watch as he wonders where the heck it went, and then make him dead with a barrage of bullets. It's even possible to regenerate health by seeking cover and pausing time. You can't rewind time and prevent your own death, but if you're quick you can reverse it and unstick a grenade from yourself. You only have a limited amount of time you can manipulate before the suit's energy runs out, but it regenerates quickly. The game promises all sorts of other "exciting" uses for altering the flow of time, but it never really capitalizes on the potential of the mechanic. Rather than challenging you with complex puzzles that require you to think outside the box or use the game's quality physics engine, you're mostly limited to slowing down time so you can press two buttons in quick succession or pausing time so that you can get through a door before it closes. Thank goodness for technology.

Other than the time-shifting stuff, the rest of TimeShift plays like a linear, run-of-the mill first-person shooter--and a dated one at that. Most of the level objectives are routine tasks like finding a button that opens a door or, sometimes, locating a lever that opens a door. Heck, sometimes you have to do both! There are a few scenarios where you ride around on an ATV and some others where you man a turret on an airship, but most of the time you'll be moving from checkpoint to checkpoint on foot, taking out wave after wave of unintelligent foes. It's good, then, that the gunplay is entertaining. This is mostly due to the game's powerful weapons that are so much fun to shoot. It might not be exactly challenging, but it's fun to pause time and take the crossbow that shoots an arrow that sticks in the target and then blows up, and then unpause time and watch your foe explode into a charred, bloody mess. There are other cool weapons too, like the automatic gun that looks like it shoots bullets, but these bullets cause the target to burst into flames when they hit, and then the dude screams like a little girl as he fries. Even the basic machine gun is powerful and useful all the way through the game. There's always plenty of ammo to be found, so you never have to be conservative with your bullets.

It's too bad that these powerful weapons, combined with the ability to manipulate time, make it all too easy to fall into a rut of approaching every situation in the same way. Even on the harder difficulty settings you can be successful finding cover, pausing time, unleashing a few shots, and then retreating to cover while your suit and health recharge. Enemies won't always stay back and wait for you to cap them, but their aggressiveness actually makes things easier. You can hide, watch their dot on the radar get closer, and then shoot them as soon as they come around the corner. There are a few instances where you'll have no choice but to seek shelter behind destructible cover, but those situations are rare, and there's usually someplace safe you can scramble to once you've been flushed out.

In addition to a lengthy 10- to 12-hour single-player campaign, TimeShift offers a full-featured multiplayer component. A modified version of the single-player game's time-shifting ability is found here, too. You can slow, pause, or rewind time by throwing one of three different chrono grenades. Everyone within the blast radius of an explosion is affected. It's a neat idea, but one that people seem all too keen to rely on--they just throw them like crazy when they see another person. You can play ranked and unranked matches in a wide variety of game types. There's deathmatch and team deathmatch, one-on-one, capture the flag, and a few unique modes. King of time has you try to gain control of the time sphere, which makes the person who holds it impervious to time effects, allowing them to rack up kills with ease. Another is called meltdown madness. This is a team mode where you try to prevent the other team's machine from counting down by throwing chrono grenades at it. You can also create your own fun by using the multiplayer modifiers. These let you increase players' running and jumping abilities, reduce gravity, or play alternate game types like rockets or snipers only, vampires, or last man standing. The multiplayer mode isn't exactly amazing, but it definitely has its moments.

One of the reasons TimeShift was delayed so long was because the visuals in the early versions of the game weren't up to par. It's not an amazing-looking game, but the graphics have improved significantly over time and there are some nice visual effects to be seen. Explosions look fantastic, especially when viewed while the game is in slow-motion or paused. It's not just the explosions that look good, but the object being destroyed as well. Crates will splinter, bad guys' limbs will fly in all different directions--there's plenty of carnage. The rain effects in the first level are good, too, though they feel overdone, as if the developer were showing off how hard it had worked on making the game look better. The quality of the rest of the game's visuals depend on what system you're using to play the game. The PC version looks best thanks to higher-resolution textures and a fast, smooth frame rate. The Xbox 360 has markedly lower-quality texture work and the frame rate experiences frequent hitches, especially in the first few levels.

It's ironic that TimeShift had such a long development cycle, because the game really could have benefitted from more time in development. If the story had been fleshed out more and the developer had made the decision to challenge players with tougher puzzles and mission objectives, this could have been a very good, if not great game. Instead, it's just another ho-hum first-person shooter with an interesting gimmick. 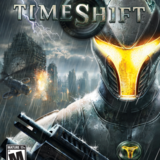 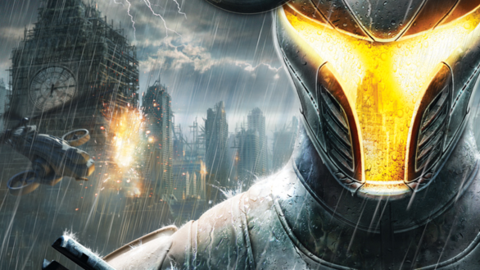 TimeShift is a futuristic, sci-fi shooter featuring a battle suit that allows the player to slow, stop, and reverse time.