The PlayStation version is even better than the original.

Namco's .40-caliber magnum opus, Time Crisis, has been nothing less to arcade gun games than what the Tekken trilogy has been to fighters: exceptional. In line with the company's home translations of the Tekken games, the PlayStation version is even better than the original.

Time Crisis is a first-person polygonal railed gun game that stands apart from others in its genre by letting you duck behind obstacles to avoid enemy fire and reload. However, you can't hide too long, as an all-important time clock hurries you along, probably ending more games than bullets do. While not running quite as fast or as pretty as its System 22 arcade counterpart, the PlayStation version is an excellent translation of the coin-op, while containing an entirely new mission with multiple paths and endings. This addition not only nearly doubles the size of the game, it is even more fun to play than the original three-act run. The title is also packed with Namco's very own light gun, the GunCon (it came in ass-kicking black in Japan, but is gray with a bright red nozzle here), which hooks up to both the PlayStation and TV video output to guarantee accuracy within a pixel - a feature you'll find most necessary.

While other gun games have a lot of slop, Time Crisis requires skill for its shots, especially in its higher levels where enemies hide behind large, and often moving, objects. The placement of the duck button near the mouth of the GunCon ensures that you hold the gun properly, dropping some knowledge down on junior gangstas everywhere (although it is possible to step on a second analog controller or a racing peripheral pedal to continue to Glock pose).

The story to Time Crisis is, admittedly, pretty placeholder (in the first mission, you must rescue a foreign president's daughter, while in the second, you go after an arms supplier), but serves to set up conflict against a variety of deadly enemies. These range from standard drones, sharpshooters, machine gunners, bazooka men, and claw-wielding acrobats, to bellhops gone horribly wrong, helicopters, a cross between a tank and a crab, and even a blade-wielding fop.

All in all, it's pretty brilliant. The only real drawback to the overall package is that the GunCon is only compatible with Namco shooters (the next one is the home version of Point Blank, due out in January) and Midway's Maximum Force. If you're looking for a really fun, really accurate gun game, this one can't be beat. 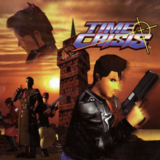 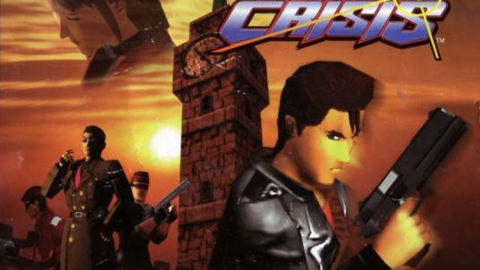 The PlayStation version is even better than the original.