Time Crisis: Razing Storm can be fun when it sticks to its arcade roots, but everything else in this shooter package misses the target completely.

There's a lot of shooting packed into Time Crisis: Razing Storm, with ports of three light-gun arcade games plus a fully fledged first-person shooter campaign jammed into the one bundle. While the ports ably capture the uncomplicated fun of the arcade originals, Razing Storm's extended foray into the FPS realm is significantly off the mark. When it sticks to its on-rails roots, Time Crisis: Razing Storm often hits the bull's-eye, although the good times are short-lived. But when its gameplay goes off the rails, so does the fun, making for an experience that delivers plenty of frustration in return for only minor thrills.

The arcade shooter games included are spot-on remakes of their coin-guzzling cousins, and as such they feature the same level of excitement, particularly when played with a partner. The three titles--Time Crisis 4, Deadstorm Pirates, and Time Crisis: Razing Storm--are all on-rails shooters, but each has its own unique feel and style, providing good variety despite their mostly shared mechanics. Time Crisis 4--the oldest of the group--still feels good after all these years, although only the original arcade version is included (as opposed to the console version that added a complete mission mode several years back). The port of the arcade version of Razing Storm ditches the selectable weapons and multiscreen shoot-outs of Time Crisis 4 and instead features more brute firepower and highly destructible environments. Both of the Time Crisis-branded games feature the cover-based shooting mechanic that is the hallmark of the series, so you have to hide behind cover to reload or to avoid fire from enemies. Deadstorm Pirates ditches cover and weapon selection completely, making it the most accessible of the three games. There's only one gun available (and only one power-up), but the game does force you to move your arms around more by including sections where you have to twirl your controller around in circles.

As you'd expect from arcade games, the action in all three of these titles is fast-paced, and while they don't add anything new to the genre, they're still fun tests of reflexes and accuracy. The over-the-top narratives are enjoyable too, if only because the ridiculous characters and cringe-worthy scenarios are sure to bring out a laugh. While Razing Storm successfully captures the fun of the arcade, it also inherits its weaknesses. Each game takes less than half an hour to play through, and apart from trying to break high scores through increasing combo counts, there's little replay value. Playing alone is also nowhere near as engaging as playing with a friend; to squeeze the most from these games, you need a constant companion to cooperate with, compete against, or steal kills from.

While you can play any of the three games included using a standard controller (or a light gun like the GunCon 3), the major new addition is the inclusion of Move support. Using the Move controller to point and shoot at the screen is intuitive and responsive, and targeting enemies for that wicked headshot is a breeze. It's also easy to get into cover, with cover mapped to the Move button on the top side of the controller (and within easy access of your thumb). The only time the controls falter is with the multiroom sections in Time Crisis 4. These brief sections have you quickly pointing the Move to either the left or right of the screen to change viewpoints, but the game will occasionally not recognise your commands. It's a minor issue, though, as the overall accuracy of the Move is quite solid, so you never feel like you're at a disadvantage even if you're not using a gun peripheral.

While the controls won't let you down during the on-rails arcade games, Razing Storm's extensive first-person shooter component is a different proposition. This part of the game--which takes place in and around the events portrayed in the Razing Storm arcade game--lets you freely traverse environments, with the Move control used to aim as well as move your camera (with a navigation controller or DualShock used to maneuver your character). Pointing the Move offscreen to the left or right shifts your camera view around, but even with an option included to change the camera movement's sensitivity, it never feels like a responsive experience as it's either too sluggish or too flighty. Having the camera and aiming tied to the Move is fine when your enemies are all within view, but as soon as you have to traverse anywhere, accuracy becomes the first casualty as it's a struggle to smoothly reposition the camera. The controls are clunky and unwieldy, and the issue is exacerbated in sections where you have to move fast and shoot at the same time (such as several boss fights). There's a solid five hours of gameplay here, but it's a chore to get through because of the poor controls.

The cover mechanic in this mode is also poorly implemented. You can take cover only in certain spots, and it's done by pointing the Move controller straight up. To pop out of cover, you simply point the Move at the screen, but the game often loses track of your movements. You find your character staring at the ceiling at times when you want him to move out of cover, and it becomes so frustrating that ignoring cover altogether becomes the easiest option. Cover is even worse when using a DualShock solo--you have to tilt the controller upwards to take cover, which is an extremely unwieldy method. The problems with the FPS section of Razing Storm don't end at the controls. The enemies you encounter are just plain dumb. Most enemies will forgo cover and just stand around waiting to be shot, while others will simply run straight at you even when they're armed. Furthermore, the level design is uninspiring and linear, lacking the gameplay variety and finesse of other modern first-person shooters.

Razing Storm also features an online multiplayer component for its FPS mode, but the options are fairly standard and include only basic modes such as Deathmatch, Team Deathmatch, Capture The Flag, and King of the Hill in either ranked or public matches. Playing online is a smooth experience, and is actually more satisfying than playing offline due to the increased difficulty provided by human opponents. Most of the four maps included are quite small, though, and feel quite claustrophobic to traverse.

While Razing Storm throws around a lot of explosions, color, and movement onscreen, none of it looks particularly sharp, and the environments and enemies look somewhat bland and ill-defined. At least the sound effects are impactful, particularly the various booms and bangs of the different guns. But the gameplay's impact isn't nearly as impressive. While the three arcade light-gun ports can provide fun, the lack of replayability means they fall well short of balancing out the uninvolving and downright frustrating FPS-wannabe that Razing Storm serves up. The arcade ports are the only live rounds in this shooter's chambers--unfortunately, the rest are filled with blanks. 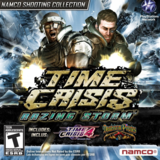 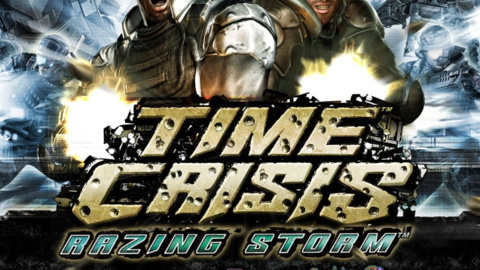