It's a solid two-day rental, but as a full-priced PlayStation 2 game, it's just not worth it.

Each installment in Namco's terrific Time Crisis series has added its own twist to the basic shooting-gallery philosophy most light-gun games abide by, but the fundamentals have remained the same. Time Crisis: Crisis Zone, a 1999 arcade game that is just now making its way to the PlayStation 2, doesn't try to reinvent the genre, or even the Time Crisis series, really. Rather, it begs the following questions: What if you had a machine gun, and what if you could obliterate the shooting gallery itself? The resulting game still feels pretty familiar, and perhaps isn't as challenging as any of the core Time Crisis games, but the pacing is faster, and it's pretty satisfying viscerally. It's a decent buzz, but with a limited number of levels and a decided lack of depth, it wears off pretty quickly.

The players are different, but the scenario in Crisis Zone is pretty familiar--Cobra-style terrorists have taken over an urban complex consisting of a shopping center, a park, a hotel, and an office building, and a crack antiterrorist team, led by you, has to infiltrate the complex and shoot absolutely everything it can. If you've played a light-gun game in the past six years or so, you've probably played a Time Crisis game--and so, in turn, picking up Crisis Zone shouldn't take long. You'll move automatically in the first-person perspective around a series of environments, plugging enemies as they pop up, run, slide, and jump into your field of vision. Pressing an alternate button on the Guncon2 (Namco's light-gun peripheral, which the game supports and basically requires for the right experience) will cause you to duck down behind a riot shield, and will at the same time automatically reload your weapon. The riot shield concept is a new one, as the other Time Crisis games had you ducking behind whatever environmental cover you could find. It seems to react a bit more quickly, which is a good thing, since the urban terrorists seem to be much better armed (and much better shots) than their Time Crisis cousins.

The Crisis Zone thugs seem to be wearing much sturdier armor too, and can sustain a lot more damage before they'll go down, which is, of course, why you'll be packing a submachine gun rather than a simple handgun. What this means on the mechanical level is that rather than squeeze the trigger every time you want to fire a round, you can just pull until you're out of ammo. This will certainly spell relief for those who are both light-gun game fans and carpal-tunnel sufferers. The submachine gun isn't quite as accurate, but its sheer firepower makes the action feel a lot more visceral, and you'll ultimately end up causing a lot more damage to the environments around you. The game actually encourages you to shoot up the joint a bit by awarding you combo points for shooting enemies and anything else that's destructible, and the sets are pretty well filled with destructible items, ranging from racks of CDs to room-filling pieces of scientific equipment. There's a pretty consistent glass-and-steel quality to the three main levels in the story mode, and you'll be gunning down the same half dozen or so types of terrorists for the duration of the game, but the types of incidental stuff you'll be destroying in the periphery is varied and helps give each zone a slightly unique feel.

Crisis Zone also makes destroying all this stuff pretty fun with a pronounced physics system that causes cans of tennis balls to launch their payload wildly into the air, glass and ceramic vases to shatter fairly realistically, and concrete pillars to crumble like you're in The Matrix. The inanimate objects are, in some ways, more fun to shoot at than the actual terrorists, who generally move in predictable patterns and make up for their lack of guile with sheer numbers. Not everything is destructible, though, which can cause for some annoying inconsistencies, like when you can shoot your way through statues presumably made out of rock, but that rather ordinary looking two-by-four can act as the ultimate Kevlar for the bad guy standing behind it. Your riot shield is also conspicuously sturdy, able to shield you completely from grenades, a barrage of stinger missiles, and a point-blank shot from a tank's main cannon.

The arcade version of Crisis Zone was much shorter than the standard Time Crisis games, and this is unfortunately the case with the PlayStation 2 version as well. The game draws out the story mode by only supplying you with a handful of continues--not nearly enough to clear the entire game on your first try--and rewards you with additional lives as you make your way further and further into the game. Even still, it shouldn't take any more than an hour or so to see everything the story mode has to offer. New to the PlayStation 2 version are the crisis missions--essentially short scenarios in which you're given a specific challenge, such as scoring a certain number of combo points, not damaging the environments, destroying as much of the environment as you can, and so on. These scenarios are really hard, much harder than anything you'll see in the story mode. Though you could easily spend more time in the crisis missions than the story mode, the scenarios grow tiresome and repetitive quickly.

Despite whatever efforts the game makes to differentiate itself from the core Time Crisis games, one look at this game and it's hard not to hear the phrase "Action! Reload!" in your head. As Crisis Zone is a port of a five-year-old arcade game, its graphics won't really wow you like they once did, but they still look decent, and they still retain that arcade-game style. The rougher polygonal edges are apparent, and the particle and explosion effects look kind of dated, but there's a pretty vibrant look to the game, and all the flying debris gives it a nice kinetic feel. Crisis Zone sounds as much like a Time Crisis game as it looks, though with a lot more rounds of ammunition being discharged. The voice acting is poor, though not so poor that it slides into irony. The weapon reports are far from realistic, but they're fitting for the cartoony tone of the game, and they're certainly loud. The music is the most genuinely good aspect of the sound design, using a blend of militaristic marches, violins, and electronic percussion to help add a bit of tension.

There's a certain amount of novelty to blowing everything up, but Time Crisis: Crisis Zone is too short and too easy. And, with Namco's own Time Crisis 3--which is longer, deeper, more innovative, and more challenging--already on the PlayStation 2, it's just too late. It's a solid two-day rental, where you can return the game knowing you have basically wrung everything enjoyable out of it, but as a full-priced PlayStation 2 game, it's just not worth it. 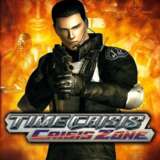 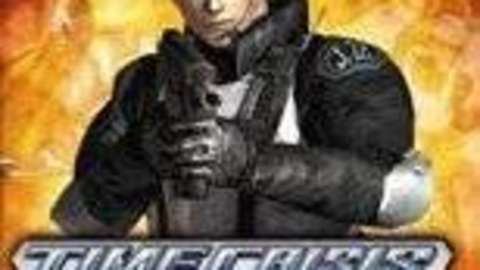 It's a solid two-day rental, but as a full-priced PlayStation 2 game, it's just not worth it.