Tiger Woods 2003 is prettier, more exciting, and more involving than any other golf game on the market and can rightfully claim its place alone at the top of the PC golfing leaderboard.

Though fall and winter generally aren't the best seasons for real-world golf, they're prime time for its digital counterpart. While both Microsoft's excellent Links series and EA Sports' excellent Tiger Woods series are generally held in high regard and have contributed equally to the demise of virtually all would-be contenders, each seems to be headed in a different direction. Microsoft seemed content to rest on its laurels and keep changes to a minimum in Links 2003, but EA Sports and developer Headgate Studios have continued to innovate and take chances. The result of all that work, Tiger Woods PGA Tour 2003, is clearly superior to any of its EA Sports precursors. It is also prettier, more exciting, and more involving than any other golf game on the market and can rightfully claim its place alone at the top of the PC golfing leaderboard.

Tiger 2003 ships with plenty of game to play, including a full 12 courses modeled after some of the most famous ranges in the world. That's twice the number of both the previous edition and Links 2003 and quite probably twice the range of environments. In Tiger 2003, you'll find everything from desert to mountain and from challenging expert courses to easy beginner ranges. You can also venture to the game's driving range and skill areas to brush up on technique, import Tiger Woods 2001 and PGA Championship 2000 courses, or even construct your own facility with the aid of the game's somewhat convoluted course architect utility.

EA Sports has also expanded Tiger's prepackaged golfer roster. Included are power hitters such as Vijay Singh, stalwarts such as Colin Montgomery, young sensations like Ty Tyron, and, of course, Tiger himself. More than a dozen touring pros and many more amateurs are available. Any player may be converted from human to computer controlled or modified via the golfer customization interface, and brand-new golfers may be created from scratch.

When you first launch Tiger 2003, you may be a bit nonplussed by the opening score, an incredibly inappropriate bit of blitzkrieg rock and roll. Even those who normally enjoy the strains of heavy metal may well find this choice incredibly bizarre. Nevertheless, it's one of the very few sore points in an otherwise excellent game.

The new menu system is great, since it moves you around quickly and intuitively from one area to another and reserves complex and advanced options for those who really want to access them. Even the backdrop to the main menu interface, featuring a large animated depiction of your currently selected golfer warming up on the course, is impressive. The game does a lot of things right, but nowhere is it more impressive than in its graphical presentation. In a word, Tiger 2003 looks stunning. More than any other golf game in the history of personal computing, it really helps you feel as though you're there, on a real golf course.

Tiger 2003 makes fantastic use of weather and lighting effects. The game has excellent-looking effects such as clouds drifting through the sky, fog on the green, flags that flap in the wind, and realistic rain. Though Tiger 2003 unfortunately doesn't have environmental conditions that change in real time, you can still expect to play games in early-morning sunrises, driving storms, and plenty of other great-looking weather. And the game's portrayal of water is probably the best ever to appear in a golf game, including remarkably realistic still water, highly detailed splashes and ripples whenever you drive into a water hazard, and fantastic-looking oceans that curl up realistically on the sand and rocks of courses like Pebble Beach. The game's fully 3D vegetation also looks thick and lush and conveniently becomes semitransparent when a golfer is nearby so that your view isn't blocked by close-up, pixelated grass.

Tiger 2003's golfers also look superb. Their animation is fluid and looks fully human with a full range of motion, including those times when they might bend over to clear an errant chunk of grass or scrape the bottom of their shoe. Unfortunately, the game does a poor job of recognizing and celebrating a victory. It ends sessions abruptly and with little fanfare no matter how well you did. Fortunately, spectators in Tiger 2003 are especially realistic, applauding to recognize solid shots and sometimes simply giving the impression of shuffling movement.

To better showcase its certifiably beautiful environments, Tiger continues to offer the best camerawork in the business. Unlike Links, it doesn't let you open a dozen concurrent camera windows, but it does conveniently permit you to control the central cam manually, which gives you considerable control over your view of the course. Much like a television broadcast, Tiger 2003's cameras zoom in and out and automatically relocate to offer gorgeous and distinctive scenes that you can view in their entirety by right-clicking to hide the game's interface. The game also does a great job of setting up pre- and post-shot camera angles and offers dramatic and highly satisfying replays on those rare occasions when you land your shot exactly right.

Tiger 2003 isn't just about looks, but about speed, too. It's really fast--much faster than the slower-paced Links 2003. In fact, Tiger 2003's screen redraw times and scenery transitions are almost instantaneous. Furthermore, computer golfers don't "think" as they do in the Microsoft game. Instead, you can expect the next player to begin his attempt within just a couple of seconds of the preceding shot. If you're really pressed for time, you can even skip ahead to the next player's turn with a single keystroke. Unfortunately, developer Headgate didn't bother with the ReadyPlay speed game option it used in the PGA Championship series, which let you set up and shoot at the same time as your opponents--though the system wasn't exactly perfect in PGA Championship, so maybe it's just as well.

In contrast to its great graphics, Tiger 2003's audio is alternately impressive and annoying. Its ambient sounds are excellent, particularly the wind and the crashing surf. The ever-present chirping birds, a fixture of PC golf games, sound realistic but can be a bit excessive. And reactions in the gallery are generally accurate but often overplayed--real-world near misses don't normally elicit a collective gasp. Similarly, in real-world golf, you won't hear a commentator say, "Got a tough line in this bunker--it's just buried," when the player is lining up a two-foot putt. Tiger 2003's announcers, David Feherty and Bill Macatee, deliver the lines in a way that, while usually accurate, often sounds generic and doesn't seem to recognize unique circumstances or difficult shots.

Fortunately, and most importantly, Tiger 2003 plays great. Headgate pioneered the mouse-motion TrueSwing back in the late '90s in Sierra's PGA Championship series and has been able to put together a proper rendition of it in Tiger 2003. The TrueSwing system accurately takes into account where you start and stop your swing and how much side-to-side variation you apply. Though some stodgy fans may prefer the traditional three-click swing, if you opt for Tiger 2003's TrueSwing, your mouse is going to feel as much like a club as it possibly could.

No matter which type of swing you select, Tiger 2003 offers woefully inept caddy advice. It's possible that Headgate might have devised such a poor assistant to challenge you to really think about your next shots, but in any case, your best bet is to usually rethink the club and direction that your caddy suggests on nearly every shot. Thankfully, the game's physics are generally excellent. Balls rarely go where they shouldn't go, and your lie will exert an appropriate effect on your upcoming shot.

The game also delivers more play options than any other golf game. With nearly 20 individual scoring variants, including skins, shoot-outs, and a variety of brief skill-based competitions, there's certainly no shortage of alternatives for quick one-off matches. If an ongoing challenge is more to your liking, you'll want to investigate the season play mode, which hasn't changed appreciably from that of last year's game but offers interesting parameters such as a qualifying school, a full year of customizable tour events, and a few major competitions. If you opt for its most realistic setup, you'll soon realize that season mode can be extremely demanding and unforgiving.

Tiger 2003 also has a brand-new career mode, which starts you out as a poorly financed, middle-of-the-road hack with high hopes. In the course of your career, you'll undertake most anything to develop your game and make a few bucks, including taking a few challenges at the practice range to earn some quick money for faster balls or better clubs. You may even want to purchase extra skill points or take a lesson and attempt to practice some of the game's more-complex shot-making possibilities such as punches, bump-and-runs, or sand extractions. Unfortunately, these lessons are often far more repetitive than they are truly instructional.

Nevertheless, with a calendar chock-full of events, a wide range of skill competitions, shoot-outs, miniature tournaments, and much more at your disposal, the career mode is lots of fun. It isn't nearly as grueling as the game's season mode, but it does offer plenty of variety. Once you begin to progress and prove your worthiness, new opportunities will open up, new levels will become available, and the whole thing becomes tougher and potentially more rewarding. Entry fees are more costly, purses are bigger, and new skill points become that much more expensive.

Tiger 2003 is a joy to play in multiplayer. Playing online is an infinitely more diverse experience than challenging a computer-controlled AI player, and EA Sports makes it easy to do so. You can use the in-game server utility to connect, socialize, and find a partner for any of the game's numerous scoring variants. You may even want to join one of several tournaments or competitions. From what we've seen, Tiger 2003 is enjoyable, lag-free, and hassle-free in multiplayer. However, if you're serious about playing online, you'll need to sign on to pay $5.99 a month after the initial 60-day trial period expires.

Tiger Woods PGA Tour 2003 is a game that truly succeeds in placing you in the midst of a drop-dead-gorgeous golfing world. It offers more courses, more touring pros, a bushel of playing alternatives, a superb rendition of the mouse-motion swing, an incredible array of camera perspectives, and several welcome new perks. 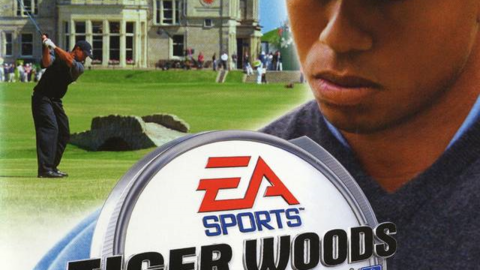