Tiger Woods 12 is another great golf sim, in large part thanks to the addition of the Masters at Augusta.

Playing on the hallowed links of Augusta, Georgia, is the goal of Tiger Woods PGA Tour 12: The Masters, another great addition to the EA Sports family of golf games. This year's sequel reworks the entire game around this legendary tournament. If you're not trying to win the illustrious green jacket in career play, you're re-creating famous shots at Masters tourneys from years past or following Tiger Woods through his four Augusta wins in an attempt to match or better his scores. Tiger Woods PGA Tour 12 isn't radically different from last year's game, but the addition of the Masters lends everything a certain gravitas that golf fans can't help but appreciate.

What you notice when firing up Tiger Woods 12 for the first time is how much the game has been reskinned to take advantage of its Masters theme. This isn't so much a Tiger and PGA game as it is a Masters game, since golf's biggest star and its biggest professional organization take a backseat to the annual tournament hosted by Augusta National Golf Club. The opening cinematic is all about the Masters. The menu screens are loaded with photos of Augusta National. The game opens with a playable intro that walks you through the final shots of Tiger Woods winning a green jacket. And, most importantly, the career mode has been renamed Road to the Masters, with the focus switched from simply progressing from the amateur ranks through Q School to the PGA Tour, to doing all of the above plus earning an invitation to this prestigious tournament. As a result, career play is more focused, with a concrete goal behind all of your efforts. Just as the Madden games wrap with a Super Bowl every season and NHL hockey games close with the Stanley Cup final, now you have a pot of gold at the end of the rainbow.

Controls are a mix of new and old. The standard analog-stick swinging returns seemingly unaltered, and it's still pretty simple to blast massive, seeing-eye drives down the middle of fairways with a flick of the thumb. Things remain much more challenging up close; it's considerably harder to launch accurate approach shots and putt since there isn't much room in the stick's limited movement space to precisely pull back some oomph from shots. In other words, it's way too easy to accidentally launch an approach shot at 90 percent power when you're trying to finesse it at 55 percent. The same is true of putts, which are still the most challenging part of the game because you need to have a smooth stroke and read the greens perfectly to have a chance at the cup.

Caddies have been added this year as a sort of controller assist. Now, instead of simply being presented with automated shot recommendations or doing it all yourself, each shot is introduced by your overalls-clad caddie. He tells you what the immediate challenge is and typically presents a couple of recommendations that often involve a safe shot like laying it up onto the fairway or just trying to hit the green, or an aggressive drive to the flag. This advice is delivered with spoken dialogue that is fairly varied considering the number of times that it's given, so you feel like you actually have a caddie helping you out during rounds. Recommendations are mostly smart, too, and get better as you play each course and the caddie develops more familiarity with it in the form of a "course mastery" rating.

With that said, you do get an occasional "You're on your own here" line, especially when playing the first couple of rounds at Augusta National. Every now and again the recommended shot is something ludicrous, like using a wedge on an approach shot from 200 yards out. Even with those minor headaches, the caddie system is a great addition to the game. Purists might find that the advice perhaps lets you play a little too much on autopilot. But this does save time when assessing shots, and it's not like you can always trust your caddie's counsel and ignore what you're doing. And if you want, you can completely ignore the guy and set up shots of your own choosing.

Aside from these new elements, Tiger Woods 12 is structured much like Tiger Woods 11. Progress through career play is the same as it has been in recent years. Everything has a strong role-playing vibe: you create a pro with a unique look and dress style and then earn experience points on the links for every event. The result is a custom-crafted pro with a thorough skill set in which you can adjust everything from driving power to putting accuracy. You also gradually earn sponsor levels and unlock skill-boosting equipment courtesy of corporations like Nike, Adidas, and Ping. If this doesn't intrigue you, you can also play single rounds of all the usual golf games with up to four friends locally or online, get into online tournaments, and play in the Presidents Cup.

Sixteen courses come with the game, including a lot of familiar ones such as St. Andrews and Pebble Beach along with the big additions of Augusta National and its Augusta National Par 3 sidekick. Extras are available as DLC. All are nicely rendered, as always, although extra attention has clearly been paid to Augusta, which is loaded with the colorful foliage that gives the holes their specific names. Amen Corner looks fantastic, particularly the 12th hole known as Golden Bell. It's hard to believe that a scenic little nook tucked away behind a stone bridge and a creek could be such a strain on so many pro golfers' nerves, but such is the beauty and challenge of Augusta National. The usual PGA pros are on board as well, led by the likes of Tiger, Vijay Singh, and Jim Furyk. Newbies this year include Bubba Watson and Rhys Davies. Commentary has been beefed up with the addition of Jim Nantz, the CBS broadcaster long considered the voice of pro golf. Oddly enough, though, he doesn't have many lines in the game itself. His contributions are mostly limited to cliches during rounds and raves about the Masters in cinematics. After all of the buildup, comments about Augusta National are actually quite subdued. Nantz introduces each hole by name as you play through, but in a very brief fashion. You're told the name and the reason for the name, and that's it. So while it's pretty dramatic to have Nantz's voice doing the reading, the insubstantial intros leave a lot to be desired.

Although Tiger Woods PGA Tour 12: The Masters can't be considered any sort of golfing evolution due to its reliance on many of the same features and mechanics found in its immediate predecessor, the addition of one of pro golf's premier events is a great addition. Being able to go for a green jacket is an impressive goal that gives career mode a kick in the plaid pants, and the other new features, like famous Masters shots and those Tiger wins, further build the illusion of hitting the PGA Tour as a real pro. Add in the lifelike caddie option you have a strong sequel that adds just enough impressive new amenities to keep virtual duffers ponying up their virtual greens fees for another round. 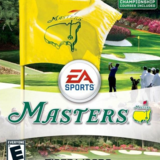