Players looking for a detailed flight simulation will enjoy Thunderstrike's tactical gameplay, but fans of visceral action will find its strike-and-hide gameplay requirements a bit too rigid.

Some would argue that an adequate 3D helicopter combat game has yet to be released for video game consoles. EA has had moderate success with its Strike series, and 3DO's Air Attack franchise is simple yet fun, but none have achieved the stark realism that is common in most flight simulations for the PC. With this in mind, Eidos has decided to revive its Thunderstrike series in hopes of providing an alternative to the arcade-influenced helicopter combat games that are currently on the market.

The story behind Operation Phoenix is a common one, but considering the current world events, it will likely strike a chord with players. Terrorists have struck around the globe, causing hysteria on a worldwide scale. In a state of emergency, nations have pulled their weapons and armies together in an attempt to thwart the terrorist attacks and bring peace to the world once again. As the pilot of the world's most technically advanced gunship, you must infiltrate the front lines and attempt to exterminate the terrorist threat.

There are four main campaigns to be completed in Thunderstrike, each containing several missions. Eastern Europe takes place in the Balkans, where you are asked to destroy terrorist camps, radar systems, and weapons. The Alaska campaign takes place in the snow-blown tundra innate to that territory, and it requires you to recover a large ship that has been hijacked and eventually restore communications to the area. The African campaign asks you to infiltrate an enemy compound and rescue the leader of a band of antiterrorists under the cloak of the night. The final campaign takes place on the terrorists' home turf in the Middle East. You must gain control of an oil rig in the Red Sea and then turn your attention to plants where chemical weapons are being produced. At the conclusion of each mission, you are ranked and given medals based on your performance. The mission objectives in Thunderstrike are many and varied, but completing them is often an exercise in trial and error. There are vague mission briefings at the onset of each objective, but they only outline the requirements of the mission. Many times the most difficult part of completing a mission is figuring out what must be done instead of actually doing it. This causes the player to be tentative and makes several of the missions plodding affairs. Eidos has billed Thunderstrike as an arcade-influenced game, but just a few missiles will send your chopper spiraling to the ground, so you'll often find yourself ducking behind objects to avoid enemy rocket fire. It certainly deprives the game of a great deal of action, but it also increases the tension during play and the payoff when a mission is finally completed.

Before you head into combat, you must first choose four weapons to take along. As you repeat the missions, you gradually learn which weapons work against the various terrorist armaments. Strategically choosing weapons is often the difference between completing a mission or being shot down. Your chopper always has a machine gun with unlimited ammunition mounted on its underbelly. But if you abuse it, it will overheat and lock up. There is an impressive array of secondary weapons at your disposal, including runway bombs to hamper enemy air defenses, torpedoes to strike subs beneath the water's surface, missiles that will lock on to the enemy, and many more. Controlling your chopper is as in-depth as a console controller will allow. The left analog stick controls forward and backward movement and will also make the chopper bank left or right. The right analog stick controls pitch and will also spin the nose of the chopper in the required direction. The targeting system is easy yet effective. You can scroll through targets with the X and circle buttons, and once a target has been locked on to, you can see its type in a small window located on the top left of the screen. This feature keeps you from wasting ammunition on targets that can be taken down with the machine gun. The L1 button facilitates cycling through several different targeting modes. You may look down on the ground for bombing runs or take a first-person view of one of your maverick missiles and guide it to its target. In some missions, you can give commands to your wingmen for support by pressing the square button and cycling through mission-specific instructions with the directional pad. They'll attack the target your guns are locked on to, create a formation behind you, defuse bombs, and relay their current status. The AI used for your wingmen is a bit robotic at times--they'll crash into your helicopter without attempting to avoid the collision. On the whole, the controls in Thunderstrike are deep but not daunting. It takes a while to come to grips with navigating the ship, but once you've acclimated yourself, it becomes second nature.

You can play Thunderstrike from three different perspectives. There's the traditional third-person view that allows you to get a good look at the chopper, a cockpit view complete with gauges and a trinket dangling from above, and a first-person view that eliminates the chopper altogether. The levels are huge and sprawling, often spanning several miles. There is some light fogging used in some areas, but there is no visible draw-in to be found. The ground is littered with objects such as trees, radar towers, bunkers, enemy armaments, satellite dishes, and much more, but some areas can appear somewhat barren at times. While you pilot just one chopper throughout the entire game, it will change depending on the weapons that have been selected. Animations such as landing gear that retreats into the chopper's body and a machine gun that spins around as it marks targets add some nice touches to the game's graphics and help make the experience all the more authentic. Particle effects are used effectively to demonstrate smoke streaming from missiles, and the explosions--whether on the ground or in the air--look excellent. Ground textures tend to repeat fairly often in each campaign, but with so many other objects scattered about the ground, it's not something most will have a problem with. Special effects such as night vision, inclement weather conditions, and infrared vision are pulled off convincingly and help to spice up the graphics just when they start to become boring. Thunderstrike also plays with a steady frame rate despite the game's impressive geometry and several explosions onscreen at once. While Operation Phoenix isn't on par with the PS2's strongest visual offerings, it's the most visually impressive helicopter combat game yet released for a video game console.

The audio in Thunderstrike: Operation Phoenix is adequate. The sound effects for explosions and missiles tearing through the sky are authentic enough, and your wingmen will jump on the radio and give you instructions on how to complete the mission. Streaming dialogue is used during the planning stages of each mission to outline the objectives and provide insight into the story. There isn't much to speak of where music is concerned. The same snare-drum-riddled military march plays during all the missions, but when the action gets intense, it's almost impossible to hear.

Thunderstrike: Operation Phoenix is technically sound, but the chopper can take so little damage before it's destroyed that it's impossible to enter a mission with guns blazing without it ending in failure. This makes playing Operation Phoenix more akin to navigating a hangar full of crates and enemies in GoldenEye 007 than blasting through level after level in other games in its genre. Players looking for a detailed flight simulation will enjoy Thunderstrike's tactical gameplay, but fans of visceral action will find its strike-and-hide gameplay requirements a bit too rigid. 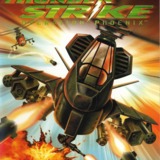