Turn on, tune in, and drop the beat.

Update: The score now reflects the Xbox One version of Thumper, and the review text has been amended to reflect our experience with the Switch version. Please scroll to the bottom to find the updated content.

Despite recent efforts to revive brands like Rock Band and Amplitude, there's a general sense that we've been there and done that when it comes to rhythm games. The staleness of the genre was a concern going into Thumper. It's a game that runs on rails, where you have to time button presses to match a beat that grows increasingly fast and complex over time, with the primary gimmick being that it's layered with trippy visuals. But those details don't tell the whole story. Thumper is like most rhythm games you've played before, but it's also a powerful, moving experience--especially in VR--that stands out as something completely different from its forebears.

Imagine for a second that you're a chrome-plated beetle participating in a life-or-death luge race set in a tangled web of undulating cables, iridescent halos, and laser beams. In one ear, the menacing sound of taiko drums bang away, while the other is fed oppressive industrial riffs and beats. The tracks are dangerously slick and fast, and the only way to survive is to give yourself up to the beat--allow it to command your instincts to lean into sudden turns and hit markers at the right time. Anything short of a total bond between yourself and the track will lead to dimmed reflexes resulting in life-ending collisions. Success is surviving long enough to meet the the boss--a disembodied flaming head with piercing eyes and spiked florets emerging from all sides. He beckons, you respond, and you pray your muscles can react fast enough beat him senseless at his own game, matching every beat he sends your way.

Granted, that may sound like a creative way to interpret what amounts to a simple rhythm game, but just because it sounds fantastical and flowery doesn't mean it's purely imaginative. You aren't challenged to create music in Thumper as much as you are to keep up with the obstacles it dictates; what amounts to beats or notes in other games is treated differently here.

Most of the time, you're forced to act in other ways--at an incredible rate of speed. When taking a steep curve, you have to press a button and move the analog stick to grind the wall. Fail to hold the turn long enough or hit the correct button, and you crash. Spiked sections require you to jump, while a series of barriers can only be passed when you hold down the "beat" button. You may also find your track expand to multiple lanes while a phalanx of technopedes float into your path, forcing you to shift from side to side without hesitation.

The big difference here is that you aren't forced to fill in a song to succeed. For example, you aren't always required to hit a button when a beat icon--for lack of a better term--appears on a track. The two exceptions are during the boss battle at the end of each stage and when a ring floats around the track waiting to punish you with an unavoidable attack for missing your mark under its watch. But these moments arise infrequently.

Thumper is about survival under the guidance of music--and less about actually creating music. Beats and notes telegraph incoming obstacles, planting a seed in your subconscious only fractions of a second before you have to react. Tuning into this is critical during later levels where unavoidable obstacles fly by a mile a minute, and the process is thrilling to see in action as you frantically react, somehow survive, and ultimately inform the depth of the song at hand.

If you hesitate to take action even in the slightest, Thumper will make short work of you. It's dangerously fast. In the span of a single second, you may have to take three turns, jump over a pit, and slam down from midair on top of an incoming beat marker. There are optional opportunities to improve your score or rating--such as jumping to hit floating rings--but making unnecessary moves is like tempting fate. Fail to input the correct button combinations at the precise moments that actually matter, and you're liable to hit a barrier, lose your sense of the beat and the track, and careen into a wall. That said, when you take the chance and come out unscathed, it's thoroughly rewarding to know that you went above and beyond Thumper's already challenging demands.

Immersion is a tall claim, but it’s one that Thumper realizes. As a game that's playable both on a TV and in VR, this really only holds true for the latter, but again, it's a step above most "immersive" experiences we've seen before. Thumper thumps, bangs, and pummels you with intense percussion. It's as if you're facing the front lines of an army that intimidates their enemies with massive drums, and when things are at their most intense, it lays into you with high-pitched, droning sounds that rake at your psyche.

Enveloped in corridors of light or swimming in a sea of darkness where faint, mechanical devils perform an intimidating dance, Thumper is truly captivating to behold, moving at commanding rate of speed that's difficult to shake. During a moment of solace, you may realize that you don't remember exactly what happened in the preceding moments. Yet there you are, speeding down the track to your next death-defying performance.

Thumper's only hang-up is the repeated use of musical measures or track designs. Each level, which is divided into a few dozen segments on average, occasionally bears too strong of a resemblance to past stages. This issue is softened due to the effective nature of the game at large, but when it happens, you can't help but wonder what could have been given a little more musical variety.

It sounds odd to claim that a lack of consistently original music wouldn't be a major problem for a rhythm game, but music isn't the point. Thumper thrives due to the way it marries speed, simple controls, and mesmerizing atmosphere. It's far more convincing in VR, where you're enveloped in the game's space and free of distractions from the outside world, but it shouldn't be ignored by those without the appropriate hardware. Thumper, no matter how you play it, is too good to miss.

Thumper has now made its way to Nintendo Switch, where it remains every bit as enjoyable to play on a monitor (at 1080p 60fps) as it is on PS4 and PC. Surprisingly little has been sacrificed in the transition to the portable console, and in some ways the fact that you can now hold it close by undocking the Switch makes it a slightly more immersive experience than sitting feet away from your TV. If VR isn't something you have access to or want to invest in, the Switch version of Thumper is arguably the second best route to experience everything this impressive and brutal rhythm game has to offer. 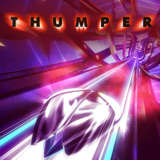 Peter made it to the final stage of Thumper over the course of eight hours before writing this review. It made his heart race, his complexion fade, and his eyes widen. He loved every minute of it. GameSpot was provided with a complimentary copy of the game for the purpose of this review. 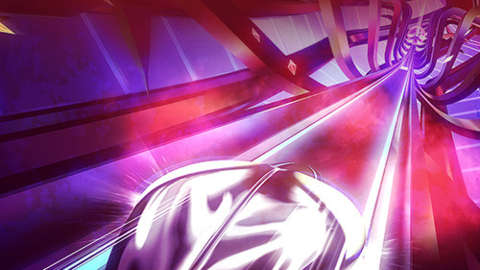