Through The Darkest Of Times Review - Enemy Inside The Gates

I push past a group of brownshirts threatening a Jewish shopkeeper. They're holding placards that read "Don't buy from the Jews!" and accusing the owner of being a parasite on the German community. The woman inside cringes as I enter the shop and warns me the men outside won't like it if I buy anything. But I insist and hand her my grocery list. At the end of the exchange I have three dialogue options: "There will be better times ahead," "I'm so sorry," and "I don't know what to say." All of them feel devastating and inadequate.

When you're one person trying to resist the Nazi juggernaut in 1930s Germany, your best course of action is not at all obvious; indeed, anything you choose to do can often feel futile. There were so many occasions during Through the Darkest of Times that I questioned whether I was doing the right thing or if anything I did could even make a difference. Frequently, I simply didn't know what to say. All I knew was that I had to keep fighting, keep surviving, keep resisting, and hope that it would be enough.

Through the Darkest of Times is billed as a historical resistance strategy game and plays out akin to a kind of narrative boardgame as you lead a band of as many as five freedom fighters against the Reich. Its story begins in 1933 as Hitler's appointment as Chancellor confirms the Nazi party's seizure of power. The four-act structure skips ahead to 1936 and the Berlin Olympics, to the occupation of France and invasion of the Soviet Union in 1941, and to the final months of the war, before a brief epilogue in 1946, a year after the Allied victory. The time periods it visits chart an emotional journey that feels authentic: Disbelief gives way to anger and fear as the truth about the Nazis' goals is revealed; suffering and grief lead to the steeling of a righteous fury; and finally, glimpses of cautious optimism are tempered by an uncertain future.

Each turn you play your hand, as it were, assigning resistance members to undertake missions across a map of Berlin. After ending a turn you see the results come in: Charlotte managed to get those leaflets printed; Arthur collected donations down at the factory but may have been spotted by the authorities; Gerhard was arrested while painting slogans on the campus walls. You're managing assets and resources--we need two people for this job, a truck and some explosives for that job--and getting the logistics in order becomes the primary focus. Always the director of operations, never the operative.

Strategic decisions are forced through scarcity. A 20-turn limit is applied during each act, which is nowhere near enough time to do every available mission. Major missions often have plenty of prerequisites, too. If you want to eventually bust a group of prisoners out of a torture camp, you're going to need some brownshirt uniforms, and to get those you're first going to have to do a recon mission. Constant is the pressure to stop and think about what you realistically have the time and resources to accomplish.

Throwing a spanner in the works, certain actions can also trigger new missions that might only be available for a handful of turns. Can you afford to spare someone to tackle a side mission without disrupting your main goal? Meanwhile, you're now running low on funds to get those books printed, so Angelika is probably going to have to ignore that meeting with a British Secret Service contact and instead try to steal new funds from the SA, the Nazi militia. The decisions swiftly pile up over the course of 20 turns and with them comes a growing anxiety that there simply aren't enough turns to get anything done.

At times I felt like I was drowning. Aside from a few narrative threads that run through the whole game, and your early choices flowing on accordingly, the start of each act essentially resets the strategic layer. You keep your recruited members and their gained experience, but all your resources--your money, all that paper and paint you'd bought, that precious intel, the medicine, gasoline, bicycles, and so on--are returned to square one. So you've got to build it all up again. With each reset, and, indeed, even on a second playthrough, I'd begin with a clear head, pick one specific goal and tell myself that was my sole focus. But every time, without fail, by halfway through I'd find myself pulled this way and that, only able to partially complete a few mission chains but never managing to pull off something big. It's immensely frustrating, that feeling of there simply not being enough hours in the day to get it all done. Looming over it, the knowledge of all that partial progress going to waste and ultimately counting for nought.

It wasn't just me feeling this way. The members of my resistance movement, as they met up each week to discuss their next moves, would also find themselves experiencing a similar sensation of despair. Peter would fret about whether they were doing enough. Juliane would worry that the situation was hopeless. I found it reassuring that I wasn't the only one struggling to find the motivation to continue.

Away from the dry mechanics of the strategic layer, it was during these narrative interludes in between turns that I truly connected with the plight of the German people. One day Rosalinde found out her brother had joined the SA. She was despondent, but I was able to encourage her to take advantage of this and get information out of him. A few weeks later she raised fears that her brother now suspected her of being a resistance member and I had a choice: tell her to leave the group for her own safety or force her stay. The brother had inadvertently given us valuable intel, but I'd grown to care for Rosalinde and couldn't bear the thought of her being discovered. Reluctantly, I asked her to leave.

On a second playthrough, I decided to run a more ruthless ship, to be the type of revolutionary who would stop at nothing. So when Lotte told me she was pregnant and wanted out in order to protect her imminent child, I demanded she remained with us. Morale in the group plummeted and, one day, Lotte just never showed up for the resistance meeting. Later I discovered she'd lost her baby and fled. It stung, of course, though I was able to coldly characterise her exit as a betrayal of the cause, thanks to the flexibility of the dialogue choices offered during these scenes.

Given the particulars of the premise--you're absolutely not doing anything other than fighting back against the Nazis here--I was pleasantly surprised to see how different choices I'd made across two playthroughs could shape two such wildly different personalities. The strategic layer seems readymade for replays, as you strive for efficiency to reach those end goals, but I was initially worried that the story scenes wouldn't withstand repetition. To an extent, that is the case, and on my second playthrough I found myself fast-clicking through conversations I'd already seen. But making different choices allowed me to interpret our struggle in a new light, and as a result, grow attached to a second collection of otherwise randomly-generated characters.

The tone is bleak, as you'd expect, almost unrelenting in its horror. A trip to a camp where the Nazis have rounded up Berlin's Romani population is grim, especially when you witness children being separated from their parents by brownshirts and taken away for unexplained medical reasons. I met a Russian woman who had escaped a massacre on the Eastern Front and made it to Berlin. She told me of the German army's scorched-earth approach in the east, of the mass graves and hangings of Russian civilians. It was heart-wrenching and, at times, almost too much to handle.

Yet there is some respite. Angelika got married and we celebrated with a party in the park. We managed to track down Monica's missing husband and reunite her family. Even as I fled to an underground train station to find shelter from an air raid, I was able to stop and help a Jewish man who was trying to hide the star on his coat that would preclude him from accessing the shelter. Such moments of community, of kindness, of hope that there's still something worth fighting for, are peppered throughout Through the Darkest of Times, seemingly appearing just when the desperation of the strategic layer had left me at my lowest ebb.

The twin aspects of the game could be better integrated. The narrative scenes are vividly realized despite the minimal presentation, often profoundly moving, and filled with choices that carry weight that can be felt weeks and occasionally years later. But outside the story interludes, there's a frustrating lack of specificity. You distribute "leaflets" and paint "slogans" and smuggle "books" and recover "intel," but none of it is described in any detail. The content is void on the strategic side, its components reduced to mechanical symbols. True, there is some overlap--a story scene might prompt a new mission on the map--but it's all one-way traffic, and your choices in one sphere are of disappointingly little consequence to the other.

Through the Darkest of Times paints what feels like an accurate portrait of life in Nazi Germany. Cherry-picking major events, like the Reichstag Fire or the opening ceremony of the Olympics, it convincingly places you at the scene, putting you in the shoes of a regular German trying to come to grips with how one person--or even five people--can respond in the presence of evil. It depicts everyday life, and everyday people, both those seduced by ideology and those finding the strength to rally against it. I'm not sure it offers any answers--indeed, I suspect my frustrations with futility were intentional. One person alone can't change the world. But that's no reason not to fight for it. 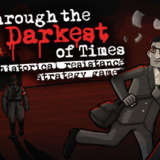 David Wildgoose survived the war in around 15 hours on his first playthrough, and only a few less on his second. A Steam key was provided by the developer. 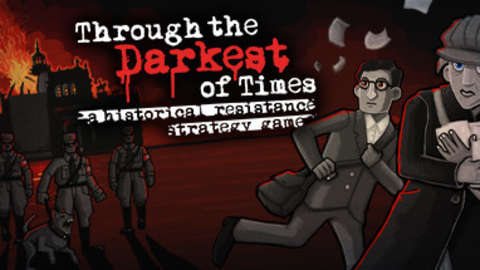 Through the Darkest of Times

Berlin 1933. “Adolf Hitler is chancellor!” We all know the consequences this message bore. Unspeakable horrors and suffering would sweep across the world. Few would stand and fight the monstrosity that was the German Reich. Will you? Lead an underground resistance group Through the Darkest of Times.

5.3
Sign In to rate Through the Darkest of Times