Thrillville: Off the Rails Review

Thrillville: Off the Rails makes every part of building and running a theme park great fun.

Many games promise that they're "fun for the entire family," but very few actually deliver an experience that can be enjoyed by both kids and adults alike. Thrillville: Off the Rails is one game that makes good on this promise. Whether building your own amusement park or playing the games and riding the rides, there's never a shortage of ways to have fun. Thanks to the inclusion of 50 minigames, Off the Rails is one of the better party games out there as well.

Thrillville's single-player campaign places you in the role of a theme park manager. Your goals include making the guests happy, ensuring the critics give your park a fair shake, and preventing a rival theme park from ruining your park's reputation. You start off with one theme park broken into three distinctly themed areas. As you complete missions like playing minigames, building certain rides, and managing staff, you're awarded thrill points, which eventually unlock new parks, each with its own theme.

There are simulation aspects to Off the Rails, but nothing as deep as other "Tycoon" games. Sure, you can set prices, run advertising campaigns, and even borrow money, but there's very little benefit to be gained by doing so, and money is never a problem. Most of your time will be spent placing rides, stalls, and games, and, of course, building coasters. Placing new attractions is a piece of cake: Scroll through a menu until you find what you want to place, locate a good spot, and press a button to drop it into place. Unfortunately, you're a bit limited as to where you can place buildings as well as how many you can place. Each building consumes power, and each of your park's three areas has a limited amount of power available. This seems to be the game's way of making sure the frame rate can keep up, but it's frustrating to have the room and the money to build something, only to be told that there's not enough power available. This doesn't ruin the game, but it would have been nice to be able to place more stuff.

Building coasters is surprisingly simple. If you're not into designing your own roller coaster, you can purchase prebuilt rides with the press of a button. But that would mean depriving yourself of one of the game's best aspects. It's really easy to build a crazy coaster. All you have to do is pick what type you want (wooden, hanging, flume, and the like) and then start dropping pieces into place. The interface is intuitive, and while the camera can sometimes be frustrating and the auto-track-completion rarely finds a solution to ending your ride, you can complete your first coaster in a matter of minutes. Of course, you're going to want to make your signature ride a memorable experience for your guests. This is where the "whoa" pieces come into play. Flaming hoops, brick walls, loops, corkscrews, and more can all be added by choosing a whoa piece from the menu and dropping it into place. You won't want to go too crazy, though, because you don't want the ride's nausea rating to be too high. Actually, that's not true. While your guests may think they don't want a ride that's too insane, what better way to end a ride than by not ending it? By not connecting your track back to the station, you can create a "crash coaster." This is exactly what you think it is--the car reaches the end of the track and flies right off. It sounds insane, but because you parachute gently to the ground, the kids love it, even as their parents watch in horror from the ground.

Building rides is just a small part of the Thrillville experience because everything you build can be ridden or played. There are 50 minigames included here. Many of these are knockoffs of arcade games like Gauntlet, Offroad, and 1942, but there are some original games to be found and most of them are a lot of fun. First-person shooters; puzzle, racing, and flying games; platformers--you name it, it's here. You can play these minigames anytime you like, and you can even play them from the game's main menu in a party game format. The game does a nice job of integrating them into the campaign. You might need to get a high score in a particular game so that you can win a prize with which to bribe a critic, or you might need to chase off some annoying robots that hack your attractions so that they can ride for free by shooting a bunch of them in a futuristic first-person shooter. These missions come along just often enough that you'll appreciate the break from running your park, but not so often that you'll feel like they get in the way.

It's how the game balances all this variety that makes Thrillville so much fun. Everything makes sense--you're not just doing minigames for the sake of doing them. If you need to train an entertainer, you do so by performing a dancing minigame. Should you need to fix a ride, you do it by connecting wires in a somewhat difficult, but still fun, minigame. Even figuring out what you're doing right or wrong is handled smartly. You can talk to any patron about a number of subjects, but if you don't feel like yapping to everyone in sight the game will let you know the more important stuff by having park-goers shout out their problems as you walk by. When you've heard a dozen customers complain about not being able to find a drink as you've walked from one end of the park to the other, well, you get the idea, it's time to build a drink stand. Off the Rails also achieves a good balance between being fun for adults as well as children. It's not a particularly challenging to build a cool park, but that doesn't really matter because the fun comes from playing minigames and building the most over-the-top rides possible. While the campaign mode is technically single-player only, it's fun to play with another person. It's not hard to envision parents handling the controls while younger children detail just how they want their coaster built.

Thrillville isn't a great-looking game. In fact, it barely qualifies as good looking, even on the PC and the Xbox 360, where it looks the best. It has a cartoonlike style to it, and there are lots of bold, bright colors to be seen. The 15 or so areas of the parks each have a unique design that might not be supercreative (there's a beach town, a snowy mountain, a futuristic area, and an underwater section, to name a few), but they all serve to make each park feel like its own special place. It's fun to customize your rides' themes and colors, even if they don't have much of an effect on your park's success, outside of a few specific missions. Though the game isn't filled with detailed textures, lighting and particle effects, or anything else that should push a console to its limits, Off the Rails doesn't run perfectly on any system. The 360 and PC versions have some frame rate hitches; the Wii version runs fairly well (and uses motion controls to let you build your coasters) but has some nasty aliasing issues; the PS2 version is aliased and runs pretty choppily; and the PSP iteration suffers from some long load times and a sometimes stuttery frame rate, though it does let you play multiplayer via Wi-Fi, which is nice. None of these technical issues ruin the experience, but it's worth noting that the game would have benefited from some sharper visuals.

At least the game sounds good. The older crowd might not dig the soundtrack, which sounds as if it were ripped straight from Radio Disney, but the music fits the game's lighthearted feel. The voice acting is solid, too. There's a surprising amount of dialogue in the game, and while the conversation options might not rival those in Mass Effect, there's a lot you can find out by simply walking up to someone and talking to them.

You can spend hours building your park, or you can just play minigames; you can play alone, have someone play the role of advisor, or get a group of people together and play the minigames like a party game. It's how everything comes together that makes Thrillville: Off the Rails such a good overall experience and one that truly is "fun for the whole family." 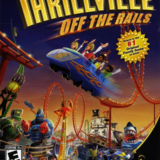