Those Who Remain is rife with frustrating puzzles and illogical scenarios, which greatly dilutes its horror experience.

Horror is often bulging with contradictions and illogical deaths. Take, for example, the hapless victim who runs into a dead end when hounded by a machete-wielding murderer, or deeper into the unsettling darkness of the woods where unknown terrors lie in wait. On the other hand there's Edward, the everyday man you're embodying in Those Who Remain, the type of horror protagonist who is decidedly more aware of the dire situation he finds himself in. Despite being unwittingly caught up in the spooky affairs within the sleepy town of Dormont, he seems to regard the scenes of terror and panic unfolding around him with the detachment and fatigue of a man who desperately wants everything to blow over. Scenes of sheer exasperation in the game are absurdly common; Edward routinely shouts variations of “Not you again!” as he scrambles from yet another blood-thirsty demon that's frantically clambering towards him.

It's not difficult to empathize with Edward's circumstances--and by that, I mean the exhaustion of going through, over and over again, the onerous cycle of looking for the right object to unlock the next objective with, and painstakingly searching for clues that will move the plot along, while eluding a freakish behemoth that's screeching for your blood. To put it plainly, Those Who Remain is essentially a three-dimensional version of a find-the-hidden-object game, where flinging furniture about and peering into every single desk drawer you spot are par for the course. Edward wanders about a lot just to look for things--into a luxurious mansion, the town's post office, the national library--and even traverses through into a parallel, alternate dimension to hunt down more keys, letters, and in one instance, weed killers.

Like many horror games, Those Who Remain is also draped in shadows, which piles on the growing tedium and frustration of searching for these items. Even in the midst of looking for these in murky corners, Edward also has to constantly seek refuge in illuminated spots against glowy-eyed specters, which can be seen silently observing him from the pitch darkness of the abandoned town. The notion of giving your enemies such a distinct form seems like a novelty in a genre that usually presents them as some wispy, unknowable force, but the ruse soon wears thin after you realize there's not much more to this idea. In the end, the impenetrable darkness simply functions as an invisible barrier that prevents you from wandering into places you shouldn't be in just yet, while hardly posing any real, active danger.

But what of Edward himself, and his motivations for skulking around in Dormant? It's not too obvious, but Those Who Remain drops several ambiguous hints. It tells you he's a tormented soul. You'll hear him sadly musing over the loss of his wife and daughter. You'll walk with him through otherworldly environments where he would pick up paraphernalia belonging to his family: a photo of him and his wife on a date, his daughter's beloved plush doll, and her first baby picture. Then you'll eventually pay little attention as he makes a brief remark about relating to another father's poor drinking habits. But these discoveries are fleeting and bafflingly vague, offering little depth to a man whose checkered, sordid history doesn't seem particularly poignant. His backstory swiftly gets muddied and crumbles under the weight of the game's bigger and more convoluted plot, which revolves around a teenage girl named Annika and a roster of unsavory characters whose fate Edward will determine by granting them redemption or condemning them to the scorching pits of hell. Is he some sort of messiah reincarnate? Who knows. The game doesn't tell you why either, and this tremendous responsibility also perplexes Edward himself to no end, who constantly questions why he had to go through this mess.

In fact, “perplexing” does sum up the bulk of Those Who Remain. The game relishes in shrouding parts of Dormont in utter darkness, but it also abundantly presents sources of light that Edward can never wield against the specters. Even when in a mansion, furnished with wooden chairs aplenty and yule logs cackling in an open fireplace, there is no option for Edward to cobble together a makeshift torch, or even grab one of the many standing lamps to illuminate the gloomier corners of the house. Then there are instances where it's simply easier to make irrational decisions, like luring a particular hulking, tenacious monster into pursuing Edward relentlessly. That's because its head, which is depicted as a monstrous hand holding onto a blindingly intense spotlight, can both light up the vicinity and burn the lingering specters that hide among the shadows into ashes. In a strange twist, this monster has thus become an unlikely ally in Edward's bewildering quest to hunt for objects--one which, in this case, is almost imperceptible within the town's infuriating duskiness, but also instrumental in aiding his escape from the very monstrosity itself. Since Edward almost always gets mauled to death after performing this stunt, this is probably not an intended move, but at least this makes retrieving the bedeviled object, when you're inevitably revived again moments later, a cinch.

To its credit, Those Who Remain does contain genuine moments of terror, at times toying with your expectations in surprising ways. At one point, Edward was cornered into a room by a ghoulish enemy. In this instance, the game smartly refrains from offering any last-ditch opportunities to teleport himself out of the mess, which it usually does (by revealing a gaping portal behind him in the final minute). Instead, the monster prowls about persistently outside, even maniacally banging on the door as your heart is firmly wedged in your throat, wondering why no exit has materialized. The monster eventually disappears, giving Edward the opportunity to sprint out of the room towards relative safety. In these rare moments, the tension ratchets up, creating an intensely unnerving atmosphere.

Strewn between the game's levels are also a couple of mind-bending puzzles, which require Edward to travel between the universe's parallel dimension--an alternate, ghastly version of Dormont. A stuck gate that's oddly inaccessible in one dimension can be opened in another by lifting heavy objects, such as massive wooden pellets that are blocking paths. But while a clever feature, most of the puzzles don't utilize it effectively, with the gimmick serving as fancy routes to obstacles in a supernatural treasure hunt.

One of Those Who Remain's most galling faults is to recycle some of horror's most trite concepts, which only inspire more groans as more of the story is unveiled. Aside from the specters, some of its more aggressive monsters are an amalgamation of tiresome horror tropes about femininity and motherhood; the aforementioned “spotlight-as-head” demon is a naked, lumbering fiend with crudely exposed breasts, and there's also a long-haired, witch-like demon that doggedly stalks Edward around, which is predictably referred to as “mother” by the young Annika. When put in context within the unfolding narrative, which is revealed, in part, to be about the immense but corrupting love of motherhood, these feel like puritanical metaphors so blatant, they hit you with the strength of a rampaging torpedo: Maternal love may be noble, but in excess, can also be suffocating and downright terrifying.

Very occasionally, Edward shows signs of duress when he's stressed. When in close proximity to the amorphous specters lurking in the dark, his breath grows ragged and uncomfortably audible. The rhythmic pounding in his ears gets louder, his vision blurs and he begins to stagger, his movement becoming increasingly difficult to manage. Edward's physical reaction to the dangers around him may feel tangible, but the game's often befuddling and illogical scenarios means that you can hardly resonate with his fears in these moments. Even though Those Who Remain may awash you in good old-fashioned terror and ingenuity for a few brief periods, these are mostly lost in a sea of frustration and generic horror metaphors.

View Comments (15)
Back To Top
3
Bad
About GameSpot Reviews 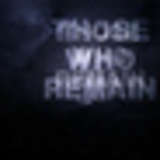 Khee Hoon Chan spent about 10 hours with Those Who Remain, and has devoted the bulk of their time pacing up and down the endless corridors of Dormont's buildings, hunting for a bunch of keys and salvation. Their code was provided by the publisher. 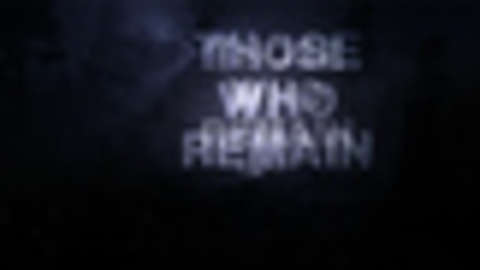