Human beings suffer from loneliness far too frequently. But whereas such a feeling is all too common for the average person, it’s a profound development when it surfaces in Thomas Was Alone. Artificial intelligence isn't supposed to exhibit human emotions, so when Thomas is stricken with these desperate pangs, he proves there's much more to him than lifeless 1s and 0s.This charming adventure heads to the PlayStation Network after debuting on the PC last year, and the puzzling journey of colorful quadrilaterals remains just as fresh and poignant as before.

Everything starts out with Thomas. A rogue artificial intelligence in a program gone awry, Thomas unexpectedly gains consciousness in a foreign land. Slowly, he becomes cognizant of his abilities. He can slide across the ground, fall dizzying heights without taking a scratch, and hop over moderate obstacles. It's not much, but the stages he finds himself in gradually grow more complex, forcing him to jump with more precision or worm his way up foreboding passageways. Once he orients himself with his surroundings, he happens upon a friend, and Thomas is no longer alone.

Every new character you meet in the adventure is either a square or a rectangle, each sporting different abilities you have to harness. Chris is not much use early on. The other characters have to form makeshift bridges, ladders, and barges to get him safely to the exit, but he eventually makes his worth known. That small passage, a mere sliver in a rock face, is too narrow for anyone to fit in but Chris. You might have cursed him earlier for slowing the group down, but you find that he's indispensable at times. Even the less-abled characters have a purpose, and you want to help them not only to usher them to the next stage, but because you grow attached to them.

Strong writing creates strong bonds. Narration plays out during the action, so you listen to a voice-over explaining the mind-set of one or more of the characters as you jump up platforms and avoid spikes. At times you laugh, such as when the deluded Claire believes her ability to float makes her a superhero, but mostly you get absorbed in their stories. The shapes who yearn for companionship make you appreciate their humanity while the ones who want to be alone have a quiet strength. At certain points, a character is lost in a portal and the desperate cries from his or her companions resonate. There's a strong narrative foundation that meshes wonderfully with the action, creating a cohesive adventure that continually draws you deeper into the tale.

Characters join and leave your party without so much as a goodbye. But you can't lament their loss for long; you must carry on. Switching between characters is necessary to complete stages because even the surest jumper cannot complete this journey alone. You may have to stack blocks to give a boost to a less athletic character, or pile the whole group on the back of the lone swimmer in your group. Different characters and obstacles do a great job of giving variety to the challenges that stand before you. Eventually, gravity becomes a suggestion rather than a law, spikes become as dangerous as the acidic water, and jet streams prove that blocks are not the slightest bit aerodynamic. If squares had toes, the characters would surely be kept on them.

The inventiveness is always welcomed, but ideas aren't fully realized before a new one is introduced. Because of that quick transition and the smooth difficulty curve that comes with every new obstacle, there is rarely any genuine challenge to force you to pause and reflect. Thomas Was Alone is a puzzle platformer where you're rarely stumped. The character traits are so straightforward, and the obstacles present danger in only one way, so you almost always know exactly what you need to do to progress, and it's just a matter of rounding up the cubes and setting off. This easiness doesn't detract from the experience while you're playing, because you care about getting your friends to safety, but their victorious shouts don't resonate quite as strongly given that it took such little effort to complete these tasks.

The singular focus of Thomas Was Alone is admirable. Every element ties wonderfully together, creating a cohesive experience that never stumbles. The incisive narration successfully covers a wide range of emotions. From sarcasm to desperation and anger to hopefulness, these diminutive blocks embody a strikingly complex array of personalities. A dynamic musical score further complements this refreshing adventure. The songs effortlessly drift from somber to uplifting, matching the tone set by the steadfast narrator. There is so much life breathed into this simple-looking adventure that you forget that you've befriended a group of nondescript rectangles rather than fully realized humans.

Thomas Was Alone is a modest adventure that makes great use of its sparse elements to draw you in. In the transition to consoles, sharper controls empower you in ways that the stodgy keyboard wasn't able to, removing the slight frustrations entirely. Furthermore, there's downloadable content for those who don't want this journey to end. For $2 more, you get 20 new levels, along with new narration and music, just as exquisite as what accompanied the main adventure. Dexterity rather than ingenuity is needed to progress, which gives these new levels a more action-heavy slant than Thomas' cerebral story. Short and sweet without any filler, Thomas Was Alone is a worthwhile experience that rises above its basic mechanics to prove heartfelt and engaging in unexpected ways. 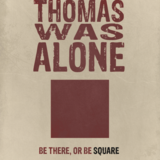