Theatrhythm is not only an endearing nostalgia trip with a killer soundtrack, but a fine rhythm game to boot.

So much of Theatrhythm comes down to nostalgia: the cutest of chibi-style characters, the squark of a chocobo, the fiery punch of an Ifrit summon. And it would be easy to imagine that there's no more to it than that--a simple sparking of childhood memories that makes for an easy cash-in. But there is more to it. Like all great rhythm games, Theatrhythm forces dexterity upon you. It doesn't make sense at first. It's even a little frustrating. But you learn, and learn quickly. What once was a confusing array of neon circles and blinking arrows becomes a series of addictive taps and swipes that morph themselves effortlessly into the music.

And what glorious music it is too. For all the chocobos, giant swords, spiky haircuts, summons, mogs, and endless corridors that the Final Fantasy series is famed for, it's the music that's often most fondly remembered. There's little that sparks the nostalgic flame better than the swelling arpeggios of the classic prelude or the weary tinkling of a piano in Aerith's theme. And there's something for everyone here, from the classic chiptune soundtracks of the original, all the way through to the majestic orchestral arrangements of XIII. You don't have to be a fan of the series to appreciate the music--it's beautifully composed.

So too is the rhythm game etched into it. Red circles are tapped, green circles are pressed and held, and yellow ones are there to be swiped as they glide across the screen. Sometimes they mimic the melody line. Other times they follow the rhythm. They often syncopate wildly. But they all do so with a pace and arrangement that's sensitive to the original material, while offering up a decent challenge--more so on the higher difficulties, where a barrage of circles come at you thick and fast, requiring precise timing.

Different tracks present different challenges. For World (field) music, notes appear on a single line, with long tracks following green circles for you to trace with the stylus. For Event music like Aerith's theme, notes appear slowly, displaying just enough of the command for you to lose your focus. For Battle music you're treated to four tracks--one for each of your team members--that not only require some wild concentration to read across all of them, but also launch attacks against classic Final Fantasy villains for each well-timed tap.

It's the Battle tracks that prove to be the most enjoyable of the lot: the music is faster, the note charts are denser, and they play a bigger part in the traditional Final Fantasy role-playing elements that are baked into the game. Characters can be levelled up, and items can be equipped for different buffs and status effects. Some items give you more hit points (which depletes each time you miss a note), and others increase your chances of stealing collectible items like character cards. Some even boost statistics such as strength or agility, increasing the power of your attacks in Battle tracks.

Items and buffs are a neat addition, but not a wholly necessary one. It's quite possible to make it through even the toughest of tracks with your rhythmical skill alone--there are even bonus points for doing so. Not much is made of the monsters in battle either. They're nothing more than a visual aid that provides the illusion of success--they could just as well not be there. They flutter in and out of battles with an alarming regularity without so much as a whimper, and even so-called "bosses" are no harder to fight than anyone else--the challenge is based on the note patterns, not an enemy's nonexistent strength.

Fortunately the underlying rhythm game is entertaining enough to hold your attention on its own, particularly when there's so much to explore. Aside from the basic Series mode, which challenges you with three tracks from each Final Fantasy game in turn, there's Challenge mode, which lets you play through tracks individually and at higher difficulty levels. There's also Chaos Shrine mode, which generates an endless list of random two-song sets called Dark Notes for you to play through at higher difficulties and contains hidden tracks that don't make it into either of the two other modes.

You can share your favourites with others via SpotPass, or join up to three other players via a local connection, each taking control of a single line of notes. Sadly, there's no online play, which is a missed opportunity not just for multiplayer, but also for trading Dark Notes and collectible playing cards with fellow players via SpotPass. Theatrhythm's one online function is a download store, which is as yet unpopulated, but there's the promise of more fan-favorite tracks making themselves available postlaunch.

If it sounds like a vital piece of the Final Fantasy puzzle is missing here, then you'd be right: there's not much narrative to speak of. A halfhearted attempt at one has been made, but the only treatment it gets is a paragraph at the start of the game. Like the RPG elements, though, the sparse storytelling matters little. This is a throughly entertaining rhythm game, one that proves itself to be as addictive as greats like Elite Beat Agents and Rhythm Heaven Fever. It has been lovingly put together in a way that pays great tribute to the Final Fantasy series and its music, without ever taking Aitself too seriously--just one look at the squeal-inducing cuteness of the chibi characters is enough to confirm that.

'
View Comments (0)
Back To Top
7.5
Good
About GameSpot Reviews 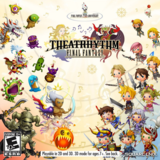