The World is not Enough Review

The World Is Not Enough provides an engaging experience but fails to match the gameplay finesse of GoldenEye.

Throngs of GoldenEye fans were foaming at the mouth when Rare politely declined to secure the Bond license for a second go-around. Seizing the opportunity, EA gobbled up the license and hasn't looked back since, publishing several Bond games for the PlayStation and now The World Is Not Enough for the Nintendo 64. Make no mistake, TWINE attempts to mimic Rare's game in many ways. Where GoldenEye's storytelling is heavily grounded in skill progression, Eurocom chooses a more blatant, theatrical approach. Paralleling Bond's latest big-screen flick with precision, The World Is Not Enough provides an engaging experience but fails to match the gameplay finesse of GoldenEye.

Minus a few levels, the majority of TWINE's quilt of gameplay is constructed of the same cloth as GoldenEye's. There's a lot of sneaking around, escaping rooms with no weapons to use, assuming other identities, and rescuing hostages. Beyond that, there are other levels that mix it up a bit. One level has you skiing down a mountain while thugs on parachuting snowmobiles drop grenades from the sky and try to cap you with their rifles. Another level requires that you swim through a maze of underwater tunnels. The controls are abominable during these levels, and they usually just take you away from what you really want to be doing - shooting to kill. Which brings up another control issue, the auto-aim. Just when you think you can count on it to sight someone up on its own, it hangs you out to dry. Other times it completely takes over, eliminating enemies in the distance while leaving the immediate threat breathing down your neck. The gameplay variety offered in The World Is Not Enough is refreshing at times, but there seems to be more run-and-gun action than the suave and sophisticated Bond would normally engage in.

What is a James Bond game without gadgetry? The contrivances Q throws out in TWINE are some of his best works yet. A watch is always part of your equipment, and this time around it's multifunctional. You can use it to stun the enemy, grapple to out of the way places, shoot darts, or cut things open with its laser. Night vision goggles, sticky bombs, and the safecracker make up just a small portion of your arsenal. The traditional Bond weapons have also returned, including silenced handguns, machine guns, and sniper rifles. Head shots lead to instantaneous death, while plugging enemies in the torso or limbs takes several rounds to bring them down. Unfortunately, the enemies in TWINE are blessed with artificial ignorance. They see, they run, they shoot - and that's about it. They do not seek cover, and they do not alter their path to make killing them difficult. Despite this, there's plenty of Bond charm to go around in TWINE, and most will enjoy playing through it.

TWINE's multiplayer mode is somewhat limited. While there is a nice selection of arenas, the weapon customization is extremely limited, with just three presets to choose from. You may play with up to three bots, though giving them any sort of command is impossible, and they generally amount to nothing more than fragging fodder thanks to their limited intelligence. There are plenty of modes to explore such as capture the flag, deathmatch, king of the hill, and last man standing. It should be noted that the frame rates stay solid during multiplayer, but the stifled customization seriously hacks into the replay value.

Eurocom has done a nice job with TWINE's graphics, considering the game's relatively short development period. The texture variety is excellent and lends itself well to making the environments believable. Oriental rugs litter the floors, and ornate wallpaper covers the walls. The problem lies in the fact that textures are far too blurry and grainy, even in high color video mode. Everything looks fine from afar, but getting up close reveals some blemishes. Enemy death throes feature some nice variety. Some bend over rails and fall to their death after being shot, while others simply fall back to the ground writhing in pain. Between levels there are real-time cinemas, and while some are full of action, others leave you wondering why Eurocom even bothered to include them. The explosions are particularly well done - they're some of the best seen in a console game to date. The attention to detail is also a bright spot, as small touches like the ability to shoot the windows out of cars on the street push up the level of realism. Compared to other Nintendo 64 software, the character models in TWINE are lifelike but a bit stout.

In the sound department, TWINE delivers. The location-specific soundtrack changes in real-time as you enter new areas. You may walk along the street and hear nothing, but venturing near the woods elicits cricket and frog sounds. Each cinema contains full speech with a nice sound clarity. Even though Pierce Brosnan's voice is replaced by an impersonator's, the voice acting rarely sounds forced or contrived. The electronic soundtrack fits the action well, as some tunes use a jazzy time signature, while others go for the four-on-the-floor house sound. Either way, the mysterious nature of the music helps create an air of intrigue.

The World Is Not Enough belongs in the upper echelon of Nintendo 64 software, but it lacks the polish required to reach classic status. More stealth elements and less reckless gunplay would have helped give it the elegant feel that's appropriate for the franchise, but thanks to the cool gadgetry, it still maintains that James Bond vibe. The limited multiplayer mode hurts TWINE's value, but the one-player story mode is fast, fun, and entertaining. Those looking for the second coming of GoldenEye's perfectly tuned gameplay and Perfect Dark's customization will be disappointed. Bond fans will enjoy this game immensely, and for serious FPS fans, it serves as a nice diversion. 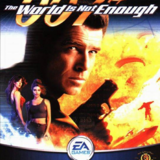