The Wonderful 101 is a bright, bold adventure that occasionally struggles to control its big ambitions.

How long has it been since you played a combo-heavy action game that wanted to re-create the vibe of a Saturday-morning cartoon? Because when something explodes in The Wonderful 101, it's not designed to evoke dread like so many gritty modern games, but instead to trigger even more pint-size heroics within its colourful world.

Platinum Games' latest game charges you with managing a mob of superpowered heroes--The Wonderful 100--and shepherding these diminutive champions through bold set pieces and intricate bouts of boisterous combat. While you control the leader of the pack, the rest cheerily follow in a slightly disorderly clump, waiting for their chance to shine.

Your gang is awash with masked individuals, and the game works by having you feed those people directly into your attacks. Weapons grow bigger and more powerful when more of your group is allocated to their construction. One of the game's most amusing elements is that its arsenal is made out of people, even down to the bullets fired from your gun. Teams are further bolstered by the addition of temporary allies that can be recruited until the end of each mission, and they're in plentiful supply, although a permanent roster of zany characters--sporting things like cuckoo-clock hats, giant hypodermic needles, and bathtub costumes--can be amassed by locating the characters hidden in each level.

Weapons are summoned into existence by drawing shapes on either the Wii U GamePad or with the right analogue stick, giving you the option to conjure up a fist, a gun, a whip, and so on. Draw bigger shapes, and you get a better weapon, and the party leader--the one unit whose movement you directly control--switches between the game's seven main characters, a continental group of stereotypes who all take speaking roles in the script.

Early combat encounters are simplistic, allowing you to easily batter enemies, but opponents become resistant to button mashing as the game progresses. The opening mobs soon seem like little more than cannon fodder when you are pitted against bigger, more intricate baddies, which require certain methods of attack. Spiked enemies, for instance, need to have their protrusions whipped off, and the tender insides of thick armoured foes must first be cracked open with the hammer. Your group moves a lot slower with your weapon drawn, too, which forces you to consider your positioning before committing to an attack.

Drawing shapes depletes an energy bar, which takes times to recharge, and your powered-up weapons only stay in their strongest form for a few seconds, requiring you to redraw the shape to charge it back to maximum strength. There's a life bar to preserve, but recruited members of your army do not individually perish, instead laying dazed and out of action for a few seconds before leaping back into the fray. When down, they are unable to fuel your weaponry, forcing you to stay on the back foot until they recover. Enemies are meaty, resilient, and bountiful, sapping thick chunks out of your life bar when landing a successful hit--like many of Platinum's stylish and technical games, a good defence is integral.

The core conceit--and main attraction--of The Wonderful 101's combat is balancing the risk of drawing those bigger shapes with the joyous, carnage-laden reward of unleashing a devastating flurry of swipes with a fully charged sword. But drawing can feel fiddly in the head of the moment. Earlier weapons, like the sword and gun, generally feel zippy and responsive, but the mix of lines and circles required to draw later weapons, such as the hammer and the bomb, are more complicated, and therefore prone to unwanted errors.

The Wonderful 101 draws many of its influences from Japanese tokusatsu, effect-laden shows such as Ultraman, Godzilla, and Kamen Rider. And while combat is undoubtedly the game's fuel, the nonsensical story thunders along in tandem. This is a knowingly hokey plot about alien invasion, packed with jokes that land more effectively than much of Platinum Games' other output. There are scores of alien ships, fleets of foes, and an elite group of boss villains that need to be knocked off across levels that are rides of twisting trajectories and scenic destruction. The game also features both English and Japanese audio and subtitles, which is a nice touch.

The game's jokes often hit the mark, such as when the stocky, hammer-wielding but tragically shy Russian character fumbles his attempt to deliver a pithy closing line after an extensively choreographed quick-time event battle. Some jokes fall flat, however, and the game's middle sections become unnecessarily burdened with dialogue and plot. It's also a bit galling, the way the game's camera is so obsessed with zooming in on the posteriors of the game's female characters, which adds a weird element of seediness to an otherwise delightfully sweet romp.

Everything tends to collapse or explode around you, forcing you to jump through various QTE-esque hoops in the game's cutscenes and larger encounters. Levels, which for the most part are split into campaigns of three stages, often drag on for a few minutes too long.

Other areas make use of the GamePad's second screen, and these moments are some of the most inventive and creative displays of the Wii U's capabilities seen to date. One area has your team inside a spaceship on the GamePad screen, while you jump on pressure pads that control the ship's movement and lasers on the television screen. Another has you scale a colour-coded climbing frame, having to keep one eye on the other screen to see which panels will be electrified next.

Don't be fooled into thinking this is an easy game. The saccharine setting and comedy characters mask the game's difficulty, and normal mode here is far more challenging than in your average game. Platinum Games' fondness for exceedingly strict scoring systems ensures that most players will be lucky to get a bronze rating during their first run through the game, and the hidden levels, when located, offer up some of the game's strictest combat challenges.

Some mechanics are poorly explained, such as the ability to have your group of heroes grab enemies or conjure up smaller, temporary versions of the game's weapons. Units are also capable of levelling up, occasionally offering up new moves, though the specifics and benefits are only lightly touched upon by the game. Finally, a mixing minigame is unceremoniously deposited in the game's menus, allowing you to create consumable items by combining foodstuffs you pick up during missions.

Other mechanics are more clear. Outside of levels, the shop lets you power up certain abilities, including basic moves like dodges and parries, beneficial boosts to your drawing speed and recharge rate, and more advanced techniques like the damage-negating ukemi. Other collectibles can be found nestled within the game's levels, including platinum coins and heart pieces that dish out extra slabs of health.

Finally, there's a mission mode that supports up to five players (four using Wii Remotes) but that can also be played solo, with wave-clearing combat challenges bucketed into tiered difficulties. Playing along with friends is a nice bonus, but it adds an element of chaos despite the game's attempts to stem the confusion by colour-coding players. The Wonderful 101 is at its best when played alone.

With The Wonderful 101, game director Hideki Kamiya has made a game featuring a stumpy posse of cartoon heroes, with the stylish combo strings of Bayonetta, and the bouncy, vibrant style of Viewtiful Joe. This is an ambitious, funny, and inventive game that's keen to impress but slightly scrappy in its presentation, packed with ideas but is slightly confused about how to express all its abundant creativity. This might not be the Wii U's killer app, but it's a much-needed shot in the arm. 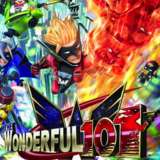