Time to resurrect my dead wife.

A lone man stands tall among hundreds of gravestones. His hunched shoulders and back, and the slight grimace on his face indicate the burden of impending peril. He grabs a shovel and starts digging. You can spot an intimidating city skyline in the distance, with gloomy clouds suffocating the sky. Eerie, synthetic piano notes play in the background. “Her grave..,” the man whispers. He quietly moves through the cemetery, beginning his tumultuous journey to discover a way to bring back the dead.

What is the meaning of life, and how far would you go to hold onto your loved ones? The Way asks these two age-old questions throughout its intriguing narrative. The premise is simple and familiar, but The Way sprinkles enough clever story beats and surprises to avoid predictability. The beginning chapters show promise, offering inventive puzzles that make great use of your character’s strengths and weaknesses. These obstacles require patience, thought, and the ability to accurately retrace your steps. The puzzles during the game's opening hours range from simple tasks, such as deciphering riddles and acquiring precious passwords, to unlocking hidden doorways and passageways in dangerous locations. Early on, you sneak into a security building crawling with deadly robots and cameras armed with lasers. Avoiding the detection while crawling through vents and hitting switches makes for thrilling James Bond-esque moments.

All your character can do at this point in the game is jump, crawl, and fire a gun--if he has one. It’s this simplistic approach that makes The Way a momentarily delightful experience. One early challenge requires you to find a way to disable streams of water so you can reach your destination. There are curious, bright green numbers placed above each stream. Switches that stop water from flowing are hidden in a different room, and also have the same numbers. I had to figure out in what order to hit the switches based on their placements above each stream. It took some time to solve, but it felt gratifying when I finally did.

The Way unfortunately devolves from this type of level design in favor of mundane trial and error. Where the earlier puzzles give subtle clues, later obstacles offer almost nothing in the way of hints or direction. You’ve no knowledge to refer to, and you end up stuck on a puzzle that can only be solved through banal repetition.

The Way further discourages you when it combines these poorly-designed obstacles with haphazard mechanics. At one point you acquire the ability to use a shield that deflects laser beams. The shield, when deployed, is difficult to wield with skill, and it has to recharge between uses. One of the worst puzzles in the game tasks you with precisely deflecting lasers with your shield towards small tiles in order to create a complicated circuit. This took me an hour to solve due to the cumbersome nature of the shield, and because I had no clue which tiles to hit first. This bogged down the game's swift pace. From then on, the puzzles grew progressively more boring and confusing. Thankfully, the story and characters are fascinating enough for you to keep playing.

The small handful of characters you meet along your journey are all eccentric, and play a vital role in the plot. A group of barbaric, colorful villagers you encounter in an ancient village wear strange masks, and can’t speak English very well. You also partner up with an orange behemoth-like creature nicknamed “Tincan.” The highly detailed, pixelated settings and character models, and the synth-like sci-fi musical score further enrich the excellent worldbuilding and storytelling. No environment or level looks the same, from decaying graveyards and ancient caverns, to sunny sand-swept deserts and bright green forests.

Making your torturous, long trek across planets and galaxies to discover the key to the afterlife can be fascinating. It's a psychological examination of the human spirit and mind, and what we’re truly capable of when we can’t accept our losses. You have to spend several hours solving frustrating puzzles to see it through, but The Way’s poignant story is worth the occasional struggle. 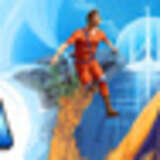 It took Alex 10 hours to finish The Way, and though he loved solving the game's opening puzzles, he had a hard time staying engaged towards the end. GameSpot was provided with a complimentary copy of the game for this review.