Season two of Telltale Games' The Walking Dead adventures ends with more whimper than bang. No Going Back caps the latest five-episode series with a surprisingly muted installment that eases up on the pedal that was once pushed right to the floor. Dialogue drives the proceedings and zombies are relegated to mere cameo appearances, and though I would have preferred a little more action and a lot more zombies, the atmosphere was so laced with an undercurrent of doom that I was constantly on the edge of my chair. Heartbreaking moments that underlined the quiet desperation driving each character, and the way that choices had a huge impact on the final resolution of the story, pushed the episode past its flaws toward a moving and fitting conclusion to a journey I was utterly invested in.

Still, color me conflicted. A number of aspects of No Going Back bothered me while playing, and they continue to bother me hours later. Plotting featured a number of moments that defied logic. The opening Mexican standoff with the Russians, for instance, was intense but also vaguely nonsensical, with everyone blasting away at each other from close distances like the trash-can-alley gunfights made famous by Police Squad. Fortunately, the entire scene was nicely rescued by a fittingly brutal ending accompanied by a summarily brutal gunshot execution. All the nihilism of the entire Walking Dead series was summed up in a few bleak seconds.

Characterizations can be odd, depending on the choices that you make. One associate may turn on Clementine over a life-or-death decision, which is out of character given the relationship that the two have developed; the dialogue choices don't even allow Clem to defend her actions, which are entirely reasonable. All of the sympathy shown for another companion throughout the episode seems wholly misplaced, given the opening gunfight and related actions that clearly reveal that not everyone in the group can be trusted. Yet another compatriot displays a number of irrational moments of her own; her choices are meant to reveal key truths, but in practice, they prompt an understandable, if violent, reaction. Some reactions seem contrived or overblown simply to foster conflict, and while I could see the group eventually coming to blows, one particular story beat was rushed and lacked a necessary trigger incident.

Still, No Going Back is not without significant storytelling prowess. Clementine's maturity is a highlight, as is her sisterly relationship with a close confidante. They share some moving moments, as do Clem and Kenny: A campfire scene at the power station is one of the most touching of the season, providing brief hope for the group while still leaving their precarious situation up in the air.

These quiet moments build significant tension. I was forever waiting for the other shoe to drop while the group hiked towards a house stocked with food and other supplies, because I suspected either a major zombie herd attack, or the arrival of more Russian goons with heavy firepower. It's a good thing that nerves are kept constantly on edge, as action scenes and interactions are typically confined to grisly but simple actions like moving keys to mimic cleaning Kenny's ugly eye wound. The most riveting action scene involves a zombie attack while the group is crossing the thin ice of a river, which leads to particularly ghastly consequences.

The rising tension culminates in a fittingly vicious showdown that serves as a final test for the ever-maturing Clementine. Your ultimate choices have a tremendous impact on who lives, who dies, and how the episode concludes. Your decisions here mean more than ever before in the series, and I am dreadfully curious to learn how Telltale handles the next steps; given the circumstances, it seems impossible for season three to pick up where this one left off.

Walking Dead's whimpers are more satisfying than other game's bangs, and No Going Back remains quite satisfying despite some miscues. This messy ending is an appropriate way to wrap a season that evolved into a morality play loaded with grim, philosophical musings about what it means to be a human being, whether you're struggling to survive in a zombie apocalypse or simply learning how to get by in the real world.

View Comments (63)
Back To Top
7
Good
About GameSpot Reviews 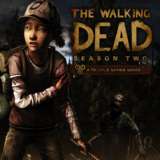 Brett Todd hung out with Clementine and pals for a little over five hours while twice playing through this final episode of season two of The Walking Dead.