The Touryst Review - Life's A Beach

The next best thing to an actual holiday.

The first island you visit in The Touryst is a tiny, perpetually sunny place, and it's full of spots to have a sit or a lie down. Having a rest doesn't achieve anything, but I found that my immediate instinct was to give my character a moment to luxuriate on a bed in one of the island's small personal rooms--this is a game about vacationing, after all, and on any vacation it's important to relax. The Touryst is a soothing and relaxing experience thanks to the lovingly rendered voxel graphics and the (mostly) gentle gameplay, and despite some occasional moments of frustration, playing it really does feel like taking a mini-vacation.

You play as a moustachioed man in a loud shirt who is tasked with travelling between different island vacation spots and collecting cores that rest within the game's scant few monuments--essentially short dungeons. You move between beach parties under orange sunsets, lush tropical expanses, and Mediterranean tourist spots, before diving into murky underground caverns that contain jumping puzzles and non-violent boss encounters. It's a strange combination of elements, but The Touryst wears its strangeness on its sleeve.

This is, above all else, a game about the joy of a holiday. As you play, you unlock new islands to visit, and while each one is small, they also all have their own distinct flavor, as well as unique activities to discover and engage with. The superb voxel art style imbues each setting with personality and makes the simple act of sightseeing a pleasure. Simply existing in these beautiful locations is inherently enjoyable, and while each new setting won't take long to fully explore, I found walking around each one calming.

The monuments themselves contain puzzles and tests of your dexterity, and working your way through them is essential to unlock every island and complete the game's story. They're ultimately the least interesting part of the game, but they're certainly not without their charms. They can be quite challenging, but the key is usually to just remember that there's an optimal solution to the puzzles, even when it seems like they're just asking you to nail precise jumps. Often, how you're manipulating the camera to line up your angles and judge the space you're in is as important as your ability to control your trajectory; if you're messing a jump up often, it's because you haven't quite cracked what that room is asking of you.

Even so, every now and then, the game asks for a greater level of precision from your actions than the controls want to give you. The controls are a bit floaty for how small some of the platforms you're landing on are, and one jumping puzzle took me, at a conservative estimate, 25 attempts to get. The rooms inside monuments are viewed from an isometric perspective, which can make judging gaps difficult. Any situation that requires you to throw an object with great precision is frustrating too because of how the throwing arc works, but these moments of frustration only stick out because they are rare.

Outside of these moments, The Touryst is a game with a lot of chill. One island doesn't even have a monument at all--instead it has a movie theatre that shows a short highlight reel of moments from the rest of the game, an art gallery that you'll eventually populate with your own photography, and, best of all, a retro arcade with three cabinets. There's a racing game (based on the studio's own Switch game Fast RMX), a strange platformer, and a Breakout clone, all offering brief diversions that successfully sucked me in for an hour. Completing the high scores in these arcade games (and earning the arbitrary cash reward) is challenging, but there's something almost zen about a game that encourages you to waste your time like this--it perfectly captures my very specific childhood memory of discovering arcade machines in local pubs while on holiday and shovelling coins into them. The Touryst, appropriately, frames everything you do as an act of tourism.

Completing sidequests will earn you money, but cash is largely inconsequential to completing the game--by the time the credits rolled I had hundreds of coins left with very little to spend them on. The sidequests play into the shaggy nature of the game--you don't complete them because they're helpful, but because you want to see everything the game world has to offer. I spent a long time down a mine you encounter on one island, engaged with a spelunking challenge that lets you collect gems that can then be exchanged for money. I spent so much time down there not because I needed money--I never even traded the gems in. I did it because the mines are particularly enjoyable--they let you abseil down cliffs, swing between ledges, and even ride rickety minecarts as you delve deeper and deeper.

There are plenty of other activities scattered across The Touryst's small world. You can fix up a boring beach party, then liven it up further by buying new records for the DJ; you can show off your sporting prowess in surfing, soccer, and pull-up minigames; you can search the game world for photography subjects with the camera you're given early on, or hunt down several carefully hidden scrolls. The sidequests are often very simple and easy but watching as island life slowly shifts and changes based on your actions is a delight.

I found that as the credits rolled on The Touryst's strange ending, I was keen for them to finish so I could jump straight back in and mop up the remaining objectives. Admittedly, even if you want to do absolutely everything, The Touryst isn't very long—my completion total sat at 94% after five and a half hours. But perhaps it's better this way--after all, the best vacations often end before you've had a chance to really get homesick. It's the next best thing to an actual holiday. 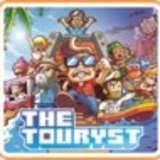 James finished The Touryst in about four and a half hours, wrapping up most of the sidequests in the process, and then dove back in for another hour to try and beat the high scores on all the arcade games (they're difficult). Code was provided by the publisher.