The Suffering might be a little too straightforward in spots, but it does make for a solid action game.

The modern horror game is one that sticks pretty close to the blueprint laid out by Capcom's 1996 release Resident Evil. Slow pacing, methodical puzzles, and scares centered around things that jumped out of the darkness were the order of the day then, and since that time, games have roughly based themselves on this concept. Midway's new game, The Suffering, goes for the horror thing with creepy monster design and startling visual trickery, but it also ditches most of the ammo-conservation and slow pacing found in a majority of horror-themed games. The end result is a much more action-packed experience that might be a little too straightforward in spots, but it does make for a solid action game.

In The Suffering, you'll play as a thick-sideburned tough guy named Torque. The game opens with Torque being led to his new cell on death row at Abbott State Penitentiary, an island-based prison where the baddest of the bad go to die. Torque has been convicted of murdering his wife and two sons, but he doesn't actually remember anything concerning their murders. After a brief intro, a bunch of creepy monsters attack the prison, slaying many of the guards and inmates alike. This leaves Torque free to explore so that, hopefully, he can escape the prison island and reach safety.

Shortly after getting out, Torque picks up a large shiv that he can use to battle the monsters. Along the way, he'll also pick up other weapons, including a pistol, a tommy gun, a shotgun, flares, flashbangs, and so on. You'll also acquire bottles of pills, which act as healing items that can be used at any time. Additionally, you'll get a flashlight that you can clip to the front of your shirt, which comes in handy because much of The Suffering is superdark.

You'll also learn early on that Torque has the ability to transform himself into a big monster when you fill up his "insanity meter." The monster does pretty serious damage to most foes, but you'll have to watch the meter closely and change back manually before it empties. If you let it drain all the way, Torque won't survive. Torque's monster form is an interesting addition, but it's usually easier to just pick off enemies from a distance with one of your many firearms, thus making the monster form generally feel like more of an afterthought than a necessity.

The game is pretty focused on combat against various creatures. Each creature has its own moves and abilities. Some will hang back and try to pelt you with projectile attacks, while others will attempt to get up close and personal. The hangmen will simply descend from the ceiling and attempt to choke the life out of you, while the burrowers you'll encounter later on will pop up out of the ground and attempt to whip you with chains. The game is pretty good at giving you a lot of targets to shoot at, and as a result, you'll usually have more than enough ammo to deal with any situation, though the higher difficulty settings do toughen things up a bit.

While the game is good at giving you plenty of monster-shooting action, it also really could have used either some more tactics for monsters or more varied types of monsters. Without this, the game's action does grow a little tedious over time, since you'll essentially face the same handful of creatures from start to finish, and you'll rarely have to change tactics to deal with them.

Aside from shooting things, you'll also do some light puzzle-solving. Most of this is as simple as finding a button or a switch to open a door, but you'll also have to push or pull boxes around, put out fires that block your path, and so on. On top of this, there are multiple ways to play the game, depending on your disposition. You'll run into trapped guards and inmates from time to time, so you can choose to help them by getting them out of their current binds or by leading them to safety. Or you can ignore them. Or you can simply blast them and take any items they may have on their persons. These choices are essentially scored and tabulated behind the scenes, and at the end of the game, you'll see one of three different endings based on what sort of person you were.

The game controls like a first-person shooter, so you use the right stick to look around and the left stick to move. You can actually play from a first-person perspective, if you like, but enemies tend to attack in groups, so not being able to see what's hitting you from behind is reason enough to stay out of the first-person viewpoint. Inventory control is handled by the D pad, and it's done reasonably well, though it would have been nice if you could change weapons more easily. Also, make sure you go into the control settings, and set it up so the flashlight is turned on and off by pushing in the right control stick. This is a thousand times easier than fumbling through your inventory to save batteries every time you encounter a room that's light enough to see in. (It's weird that the game simply wasn't set up this way by default.) The game is available on both the PlayStation 2 and Xbox, and we'd have to give a slight edge to the Xbox control scheme. It feels slightly more natural on the Xbox controller, and the game's auto-aim seems to track a bit better in the Xbox version.

Where The Suffering really scores is in its presentation. The game's monster design is interesting--with most monsters representing a different method of execution, from beheading to lethal injection. The mainliner is a creature that has a ton of glowing hypodermic needles sticking out of its body, thus representing lethal injection. It'll throw needles at you, and if one hits, your vision blurs for a second or so. The way the slayers move is appropriately creepy, especially when they're grinding one sword along a nearby wall or floor as they run at you. In general, while you'll see all the tricks the game's monsters have to offer fairly quickly, they do make a great first impression.

The rest of The Suffering looks pretty good, too. The models aren't the most detailed ones in the world, and the environments aren't supremely detailed, but since most of the game is incredibly dark, you'd have to really squint to even notice. It also moves at a smooth frame rate, which is nice. The game's coolest effect, though, is how Torque gets completely covered in blood after close encounters. It will wear off over time, but since you're usually getting right back into the middle of a fight, Torque is usually pretty much caked with gore. As you might expect, the Xbox version of the game looks better than its PlayStation 2 counterpart. The Xbox version also has widescreen 480p support, which is cool. The PS2 version's frame rate isn't quite as solid, and the texture work isn't quite as clean, but beyond this, the two versions look similar.

Great sound is key to making a horror game. The Suffering's sound is as great as it needs to be, with lots of strange ambient noise, good shrieking monsters, and other cool little touches. The game's voice acting is a big standout as well. Though Torque himself stays silent, you'll hook up with a variety of characters and will hear things like radio chatter and other speech throughout the game. All of it is very, very well done. The sense of fear and impending insanity really comes through in a lot of the dialogue. Also worth mentioning is that The Suffering has an extremely dirty script. The game's extreme language doesn't feel out of place. You'd certainly expect that a bunch of surly prisoners would swear a lot, so you'd have to believe that they'd do it even more so when being attacked and killed by hellish creatures. Between this and the game's high volume of blood, The Suffering certainly earns its "M" rating.

Though The Suffering tends to rely more on startling you with visual effects and sudden attacks than on actually trying to scare you, it's still a pretty refreshing take on horror-themed games. It's also a bit longer than you'd expect from a straightforward action game, though the increased length is offset by an overall lack of variety. More monsters, more ways to do them in, and perhaps some slightly more-involving puzzles would have probably made the game feel more in-depth. But even taking this into consideration, The Suffering is a fun shooter that fans of action games will get a kick out of. 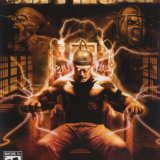