For criminals, crime may not pay, but the entertainment industry has sure done well by it. Countless films and TV shows have tapped into the supposedly glamorous and alluring side of crime, making stylish, romantic rebels out of mafiosi and art thieves. Of course, the game industry has tried to muscle in on this thematic turf, but with less obvious success. Now, publisher JoWooD is taking a stab at the crime genre with The Sting!, a lighthearted burglary simulator that manages to be entertaining despite some real weaknesses and peculiarities.

The game's name is actually a bit of a mystery itself. Other than a shared theme of crime, the game has nothing to do with the classic 1973 film The Sting, which stars Robert Redford and Paul Newman. Though you wouldn't know it from the anglicized title, The Sting! is actually the sequel to Austrian developer neo Software's 1994 DOS and Amiga game, Der Clou! (which means "The Crux" or "The Highlight"). Like the original game, The Sting! sends you back to the 1950s for a life of comic-book-style crime. You play as Matt Tucker, an ex-con who apparently learned little in the big house and can't wait to get back into the burglary business in the game's setting, a city called Fortune Hills.

Your overall goal in The Sting! is simple: carry out progressively harder heists and make off with as much loot as possible. The more cash and valuables you swipe, the better tools (crowbars, lock picks, drills, and so forth) and larger getaway vehicles you can buy, which will in turn let you carry off even more stolen goods. The basic gameplay is divided into a real-time component and a planning segment, but not in the same way as a game like Rogue Spear, as you might expect. Instead of planning a mission and then carrying it out in real time, you use the real-time component to explore the city, sell loot at the pawnshop, buy a new getaway vehicle at the auto dealer, or meet new thugs who might join you as accomplices.

The heart of the game actually plays out at Matt's hotel room desk. From here, you're presented with a number of buildings to rob, like a museum or a ritzy hotel. Then, using a VCR-style control, you act out and record a virtual robbery of the building in question. You go through the motions, breaking into safes and sneaking around to avoid making too much noise or being spotted. Each shop owner or security guard has a bright cone of light representing its field of view, and these cones show through walls and floors, so you can track them easily in multistory buildings. There's also a meter that shows how much noise you're making when prying open a window or jimmying a lock on a cabinet. If you think you might have been spotted or heard, you can just rewind the plan to any point and try a different tactic from there. If you're not sure what to do next, you can stop the action at will, and time will freeze temporarily while you assess the situation. No matter what happens, you can't get caught while planning since Matt is really back in his hotel room the whole time.

Once you've devised a plan that you like, you then view it as a noninteractive movie. Here, you just watch or fast-forward to the end, and that's it. You'll now see for sure whether your plan worked: It's easy to think you were successful while planning the robbery, but you might later discover that you tripped an alarm or were seen, putting an end to the mission. Just as you can't really "lose" while planning, a failed execution of your final plan doesn't really hurt you: you won't have to face the authorities or trigger-happy store owners. (For that matter, the game doesn't feature any violence at all.) While it's dull to watch a movie of what you just carried out in the planning stage, the planning itself can be mentally engaging. The Sting! isn't about action--it's about pattern observation, evasion, and cleverness.

Controlling Matt or his accomplices is generally easy. The third-person camera can be zoomed and rotated easily with the mouse, though walls and other objects can block your view at times. You can also switch to a first-person view temporarily. Objects Matt and his accomplices can interact with will become highlighted when you move the cursor over them. Then, when you hold down the mouse button, the game will display icons for actions such as talking, manipulating, and observing. Having just a few logical options like these streamlines gameplay and keeps you from having to guess what you're supposed to do at different junctures. Taking a cab or talking to other characters, like the clownish pawnshop owner, Ali, is equally simple thanks to the game's straightforward menus and dialogue trees.

Though it's a game about crime, The Sting! is presented in the style of an illustrated children's book or cartoon. For instance, each character's proportions are all grotesquely exaggerated, so Matt's chin takes up half his head. Taxicabs are strange bulbous things that bounce as they chug down the road. The game also uses lots of simplified colors and textures, which help create a gloomy city as a five-year-old might imagine it. But that's not necessarily a bad thing, as the graphics can be charming--at least once in a while. Also, a few of the little details, like the streetlights glowing in the fog, are pleasant, though far from spectacular. Unfortunately, The Sting! occasionally has severe clipping problems, which sometimes place two characters in the same spot at once. And like the game's graphics, only bits and pieces of the game's sound really stand out, like the jazzy music score that brings Henry Mancini's compositions to mind but doesn't really match their quality. The game is less emotionally involving than it could be since its sound effects are infrequent and dull, and you hear voice-overs only during the intro movie and cutscenes.

The Sting! has a cartoony, childlike presentation that doesn't fit its subject particularly well and also makes you wonder who JoWooD is trying to appeal to. The Sting! looks and, in many ways, plays much like a more complex version of the Chicken Run game adaptation, which was geared toward young players. Some older players might be turned off by the cutesy visuals or just not find them appropriate to the gameplay. The complete lack of violence also reinforces the idea that The Sting! is in some ways a kids' game. There's nothing wrong with an all-ages game, but here, the overall effect is a bit schizophrenic. Even with the questionable atmosphere and strange real-time/planning/movie setup, The Sting! does offer an enjoyable amount of tension and mental challenge as you creep around stores at night and run for cover when guards stroll by. The strategies you'll use to play the game certainly aren't particularly deep or complex, but simple entertainment is hardly a bad thing, and more often than not, The Sting! provides plenty of it. 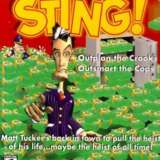 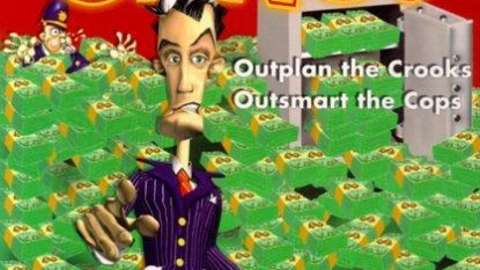