The tribe has spoken, it's time for you to go.

The Solus Project is a survival game with a mysterious story to tell. You play as an explorer who crash lands on an alien planet during a search for mankind's next home, and with your survival on the line, you have to traverse a strange, deserted world and find a way to communicate with other voyagers. Along the way, you discover the land isn't as benign as it first seemed; it houses numerous dark secrets. It's an interesting premise that's ripe for excitement and intensity; however, it doesn't come together in a satisfying story and is rarely, if ever, engrossing.

The world you're stranded on is bleak and desolate, and the area you explore is a collection of islands, so much of what you see are coastal areas with beaches and large cliffs. You'll also explore creepy caves, which are nigh impossible to navigate without a source of light. The environments don't look particularly outstanding, but some of the weather effects can deliver moments of awe. The first time I saw a tornado, I was left with my mouth open in astonishment. The weather can be daunting and dramatic, assisted by music that swells and crescendoes with the wind. Tornadoes are joined by meteor showers and lightning storms, but the danger of the extreme conditions was moot--it wasn't hard to avoid death at the hands of the vicious weather.

The story is delivered through brief and infrequent monologues, and through stone tablets that your computer-like device translates. Much of the storytelling is also conveyed through audio logs your protagonist records. But despite the fact that you come across notably crazy sights, your character almost never acknowledges them when delivering her verbal assessments, focusing instead on minor, seemingly mundane details.

While there isn't any combat to speak of, you are in a constant battle to survive, and it's crucial that you stay on top of your hunger, thirst,fatigue, and body temperature. You regain health by sleeping or consuming special items. Monitoring temperatures is a critical task as it's easy to succumb to hypothermia or heat stroke, which can quickly put your life in jeopardy. With the right supplies, you can generate heat or cold as needed. Despite having to manage a host of physical conditions, survival comes easy as long as you pay attention, which unfortunately undermines any feelings of desperation the game attempts to evoke.

Your primary objective during missions is typically to get from point A to point B, and though you regularly come across puzzles or obstacles, they're usually easy to resolve. You have access to tools that can help you complete certain puzzles, like a hammer that can break down walls or a teleport device that shoots discs you can teleport to. Some puzzles can be solved through remembering patterns, while others require you to use the teleport device. However, my solutions often felt like I was cheesing my way through the game. In a lot of cases, I would hammer the jump button to slowly but surely make my way up a mountain or constantly shoot the teleporter discs until one finally made it through a crack or over a wall, which would allow me to teleport to them, then move on. Instead of feeling smart after solving a puzzle, I felt like I achieved the solution by pushing on something over and over until it worked.

Sometimes you're left to explore rather than chase a distinct objective, and this isn't immediately a bad thing, but The Solus Project does little to inspire you to roam the planet's open spaces. At best your curiosity is rewarded with supplies, tools, or slight stat improvements. I never found myself struggling to survive, so many of these items ended up sitting in my inventory. There are times when you come across items that seem initially useful--like a rope that can be used for climbing--but you may never find a practical use for it. The Solus Project pushes you to explore, but it fails to reward your efforts in meaningful ways.

The Solus Project tries to bring story and survival together in an engaging way, but it ultimately falters in this attempt. It has moments of wonder, but they're divided by what is mostly monotonous wandering from place to place. It's a disappointing game with a lot of missed potential, and it doesn't convey a good story or the rewarding feeling of surviving against the elements. 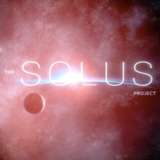 Mat completed The Solus Project in 10 hours. He explored for a bit and even tried out the experimental VR mode, though he got motion sick shortly after he started moving. GameSpot was provided with a copy of the game for the purpose of this review.