If you ignore the motion-sensing controls, then you'll find a lot of exciting aerial action in The Sky Crawlers.

Awful default controls and a story based on an anime movie that's not very popular outside of Japan are not the ingredients that you expect to find in a good game, but The Sky Crawlers: Innocent Aces somehow works despite having these two strikes against it. This combat flight simulation from Namco's in-house Project Aces developer (best known for the Ace Combat series) doles out a ton of adrenaline-fuelled excitement that you can really get into as long as you take a pass on the motion-sensing control scheme, as well as turn your brain off as soon as your wheels touch the ground and somebody starts to talk.

That control issue is up front and center as soon as you start playing The Sky Crawlers, though you can thankfully deal with it pretty easily and get on to the shoot-'em-up stuff. The main control system touted on the back of the game box as some kind of "realistic, intuitive" revolution in flight sims is an absolute nightmare. Here, you're strongly encouraged to fly planes with the nunchuk and the Wii Remote, with the former acting as a free-moving flight stick and the latter as a throttle. It's an interesting experiment, but it doesn't work. The biggest problem is the lack of a base for the nunchuk. Instead of manipulating a typical flight stick stuck on a desk, you're flailing about with the nunchuk in midair, pulling back, pushing down, and twisting from side-to-side. Thankfully, you can play with a traditional gamepad like the Wii's Classic Controller or the system's supported GameCube pads. And this option isn't totally dumbed down because you can choose from either the straightforward basic controls or the expert option where you need to know what "yaw" means.

If you make this controller switch, then you'll soon discover a captivating arcade combat flight sim. You play as Lynx (later called Cheetah and Black Cat as he builds his air cred) who is a pilot for the hotshot Cheetah Squad in an alternate reality where a war-weary populace allows major corporations to stage phony conflicts. The thinking appears to be that you won't want to fight a real war if you can watch a fake one unfold in the skies over your cities, which is a little dumb. Storytelling holds true to the Japanese anime style of the original movie, which builds nicely over the 18 or so missions of the single-player campaign (there is no multiplayer) to the point where you sort of care about the characters…even while you want to drive pencils into your ears to stop the overly enthusiastic voice acting and Muzak score. The look of the game is appealingly retro, with both the planes and cars glimpsed in cutscenes looking like models straight out of the 1940s and 1950s. There are some nods to sci-fi, mostly with the arrival of genetically engineered teen pilots called kildren, but for the most part, the game feels like something taking place decades in the past. The plot can be a little cloying, particularly some of the poetic odes to flying and countless romantic shots of planes flying toward the sun stuck awkwardly into cutscenes. At least you can ignore most of the schlock because the story is basic enough that you can skip the cinematics and not miss anything.

Focusing on the dogfights is a good idea because the aerial battles are easily the best aspect of The Sky Crawlers. Missions are fast and frantic, with lots going on in the great blue yonder. The challenge factor is squarely in the middle on the default difficulty setting, with most scenarios beatable in just a few attempts with the exception of the climactic battle and an extremely annoying mission about one-third of the way in where you are forced to escape a wave of enemies in a sluggish pig of a plane. Sorties also mix different end objectives into the dogfighting. You bust dams, sneak into enemy territory to take recon photos, defend ground targets against enemy assaults, escort allies, and go on bombing runs. Almost two dozen planes are unlocked throughout the course of the campaign, giving you an assortment of great-looking rides. All are slightly futuristic variations of old propeller aircraft--a look at what might have happened if jets hadn't replaced the old World War II designs in the late 1940s and 1950s. Each plane can also be jazzed up in the hangar with a wide selection of unlockable weapons, upgrade parts that increase things like speed or armor rating, and even paint jobs. So even though you can soar though a first run of the campaign in just five or six hours, the depth here gives the game replay value.

Dogfights are fairly stock standard for an arcade-oriented combat flight sim, with a couple of important add-ons. Instead of manually fighting your way to the bitter end in every duel, you can make things a little easier by calling up two special flight options. The most powerful is the tactical maneuver command. This special attack is earned by staying close to an enemy plane long enough to fill up a progress bar. If you get it at least one-third of the way full, you can then hit a button to activate a crazy maneuver that sees you automatically flip or barrel roll to wind up directly on the tail of your foe. From here, a quick squeeze of the trigger is all that's required to shoot down the bad guy. Similar manual maneuvers are also available, although they can be trickier to pull off and are generally of use only when you're stuck with an enemy on your six. Both features are very arcade oriented, but they fit in perfectly with the game's casual combat flight-sim atmosphere. They let you speed up missions by cutting right to the chase so you can gun down enemies without spending an eternity wheeling and turning in dogfights. They also allow you to rack your kills well into the double digits in many missions. At the same time, these maneuvers aren't just gimmies. You have to fly with skill just to stay close enough to an enemy to activate a tactical command, so you can't cruise through missions on autopilot.

Even though there are a few miscues here, The Sky Crawlers: Innocent Aces is still a formidable combat flight sim. As long as you can ignore the wonky motion controls and have a high tolerance for the syrupy storyline, you'll find a lot to like about this action-filled flier. 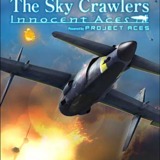 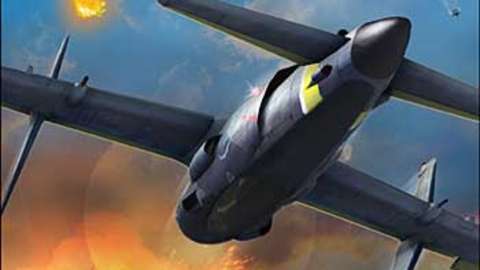 Use the Remote and Nunchuk to steer your plane through the skies as you seek out and gun down enemy jets.

7.6
Sign In to rate The Sky Crawlers: Innocent Aces