Unfortunate technical problems bring down what is otherwise the freshest new take on a console Sims game yet.

It might not have been clear back in 2000 that The Sims would become the best-selling, multiplatform phenomenon it is today. But the series' unusual formula--which let you control the lives of little computer people as they ate, slept, found work, and formed relationships with other little computer people--launched a lengthy series of games on both the PC and consoles. The console versions of the game never quite captured the zany, unpredictable nature of the original PC versions, which had superior artificial intelligence, but The Sims 2: Castaway comes the closest to presenting a fresh and enjoyable new experience. Unfortunately, the PlayStation 2 version suffers from sometimes-lengthy load times and technical problems that make the game harder to enjoy.

To be fair, Castaway has a lot of the same features as The Sims series. You create a custom "sim" character with certain vocational skills and personal needs (such as hunger, fatigue, and social interaction), but this new game takes a creative approach to the use of these features. Rather than build a small group to live the life of a nuclear family in the same house, you create a crew of castaways who end up shipwrecked on a tropical island and must make a new home for themselves a la Swiss Family Robinson. To that end, you'll guide your characters to collect driftwood and other building materials, along with various wild fruits and vegetables to eat (some poisonous, some not). You'll also catch fish with a spear, fashion clothing out of tropical leaves, and build primitive shelters and even rafts to explore the surrounding islands. You'll also fulfill your characters' need for social interaction by either finding the lost members of your crew, or making friends with the local monkeys, who can be bribed with bananas and eventually trained to gather materials or food for you.

Castaway builds on the "mostly open-ended game with some goals" design that previous games in the series followed by also heavily emphasizing collection gameplay. You spend a great deal of time picking up stuff or harvesting supplies (in some cases, to build tools to let you harvest other types of supplies). However, you certainly don't have to pick up everything unless you're an obsessive collector type who has to discover every variety of plant, collect every type of seashell, or catch every species of fish. In many cases, you'll instead be exploring new areas in search of new materials and clues to advance, such as discarded books that contain plans for new items to craft, as well as random messages in bottles that wash up on shore.

If you can tolerate the collection gameplay, which occasionally gets a bit repetitive, the game actually offers a surprisingly varied experience reminiscent of games such as Animal Crossing, Harvest Moon, or the Seasons expansion pack for The Sims 2 PC. All of those games were relaxing, leisurely experiences for players of all ages, and they let you interact with a colorful, nonthreatening world to accomplish your goals when you cared to. In Castaway, you'll basically always have at least a few different easy tasks on your plate to accomplish, as well as some slightly longer-term goals for which you'll need to collect a few more resources or make a few more discoveries to complete. Your sims do suffer from their physical needs, but they're generally easy to maintain. Likewise, some of the more advanced crafting recipes require your characters to develop higher skill levels in vocational areas such as body strength and mechanical skills, but these skills develop naturally as you continue to explore, harvest, build, and interact, so they're usually not a burden to deal with.

Castaway also offers a fresh new visual look that features slimmer characters with a more-stylized look. They're not necessarily better than the typically more detailed, more colorful characters from previous games, but they're certainly new, and they still move with the kind of expressive animations you'd expect from a Sims game. The game also offers plenty of brand-new sound samples for the nonsensical "simlish" language the characters speak. Better yet, the game features an all-new musical soundtrack that, unlike previous Sims console games, does not heavily recycle music from the PC versions, but instead uses new tropical-themed songs that are suitably lighthearted and cheerful. That's why it's a shame that the PS2 version of the game suffers from load times that randomly become very long, and that occasionally cause the game to hang indefinitely so that you lose all your progress. Having to stop what you're doing to save frequently while playing the PS2 version (or risk losing all your progress) breaks up the game's otherwise leisurely pace.

It's a shame that the PS2 version's technical issues detract from the game. Nevertheless, by offering new graphics, new sounds, new music, and a new way to play The Sims, Castaway offers a lively way to enjoy the series and those little gibberish-speaking characters that have made such a name for themselves--as long as you have enough patience to spend a good chunk of time hunting and gathering. 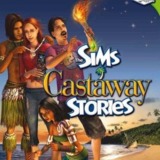 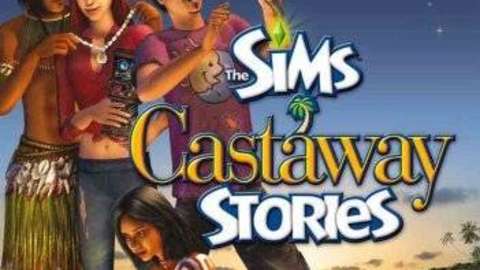 When your Sims find themselves stranded on an unexplored island paradise, you must help them to build a new life.