Save for Konami's original arcade beat-'em-up, the lineage of games based on The Simpsons has been less than stellar. The last two games to feature Matt Groening's maladjusted family unit, The Simpsons Wrestling and The Simpsons Road Rage, threw together the colorful characters of Springfield with gameplay that was remarkably similar to that of certain other popular game franchises. Now that pro wrestling and a Crazy Taxi clone have both been checked off the list for Simpsons game concepts, EA and The Code Monkeys have sought to mimic the Tony Hawk's Pro Skater formula to produce The Simpsons Skateboarding. The concept isn't exactly inspired to begin with, but the game itself is executed poorly enough that neither fans of the cartoon nor fans of action sports games will want to have anything to do with it.

When you begin play, you'll initially have access to only one level, as well as Homer, Marge, Lisa, and Bart as playable characters, though fulfilling objectives in the first level will unlock the subsequent level, and finishing the game will net you other playable characters like Nelson Muntz, Krusty the Klown, Otto the Bus Driver, and others. The levels you'll go through are all broad approximations of Springfield locations designed as skate parks. You'll start off in the area surrounding Springfield Elementary and move on to downtown Springfield, also visiting Itchy and Scratchy Land, the nuclear power plant, and the Springfield Gorge.

In each of the 10 levels in The Simpsons Skateboarding, you'll have to complete a set of goals before you can move on, and the goals remain largely identical from level to level. You'll start off with six quick lesson objectives in "skillz school," where the game essentially forces you to master a few key maneuvers before you can move on. Once you've completed skillz school, you'll move on to the regular level objectives, none of which should surprise action sports aficionados. In each level, there's basic item collection (like grabbing three donuts), three high-score score objectives, a destruction objective (like knocking the head off the statue of Jebediah Springfield), and a letter-collection objective, which changes from level to level and includes spelling "skinner" or "squishee" or the like. Finally, each level also has a competition component where you have to earn a certain point score on a specific area on the map before the time runs out. There are also two perfunctory multiplayer games, which include a basic score-based competition and a game of horse. There's nothing in The Simpsons Skateboarding we haven't seen in a dozen other action sports games. The game will occasionally get rather devious with the item placement on some of the collection goals, but that edge is dulled by the big arrow at the top of the screen that directs you to your next objective. This simple, linear format might be more forgivable if the gameplay was solid, but such is not the case.

The gameplay is just a stripped-down Tony Hawk, with a handful of basic kickflips, grinds, aerial grabs, inverts, and manuals and a special trick or two. The limited number of tricks isn't really so bad, but the boards handle lousily, turning wide, moving rather slowly, being needlessly difficult to bring to a stop. Rotating your skater while pulling a vert trick is theoretically done with the shoulder buttons, but either the timing is incredibly specific or this mechanic is just broken, because half the time the skaters simply ignore the spin command. Grinding, on the other hand, is stupid easy, as the balance meter will stay at dead center as long as you don't move to the left or right while you're actually on the rail. The game is full of these kinds of gameplay quirks that make it unexciting to play.

As unenjoyable as the gameplay is, the single biggest offender in The Simpsons Skateboarding is its graphical presentation, which is just bad. The township of Springfield has been rendered in a flat, blocky fashion, with lots of four-sided buildings and six-sided trees, and the textures range from passable to downright awful, exhibiting lots of blur and occasionally some really nasty color banding. The actual character models do kind of resemble their animated counterparts, but their proportions don't look quite right, and joints between the distinct head, torso, and limbs portions of the models are all very visible. Remember the episode of The Simpsons where Homer and Bart fall into a weird three-dimensional world and are rendered with polygonal models? Those models are head and shoulders above anything that The Simpsons Skateboarding is even remotely capable of. Topping it all off is some really vicious and sporadic slowdown, which brings the game to its knees. The only positive thing to say about this game's graphics is that the levels are large and the draw distance is unnoticeable, but these merits hardly make up for the rest of the visual deficiencies in The Simpsons Skateboarding.

The game sounds only slightly better, featuring a blasé soundtrack of reinterpreted Simpsons themes and lots of voice samples. Actually, there's just lots of voice, but you'll hear bystanders like Apu, Barney Gumble, and Ralph Wiggum say the same few phrases whenever you get near them. Springfield Action News anchor Kent Brockman serves as commentator for the game, and he'll call out every single trick as you pull them off. With only two different inflections for each phrase, this becomes preternaturally annoying within the first level. 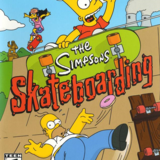 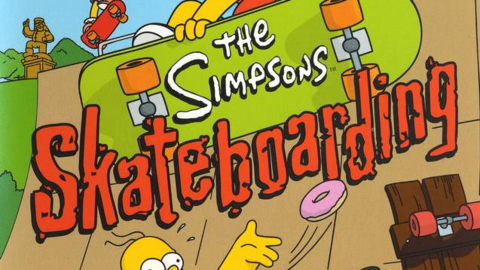