The Simpsons: Night of the Living Tree House of Horror Review

THQ has managed to re-create a decade of Halloween specials into a single GBC game that's bound to give series fans hours of recreation.

THQ's latest Game Boy Color release, The Simpsons: Night of the Living Tree House of Horror, is seven levels of spooky action ripped straight out of a decade's worth of Halloween specials. The family's souls are trapped in Bart's tree house, and the only way to save them is to guide Bart, Maggie, Lisa, Homer, and Marge safely through each of his or her own uniquely nightmarish scenarios.

As can be expected from a TV license, this particular Simpsons product is an action game. However, unlike the usual fare of repetitious platform-jumping rehashes, Night of the Living Tree House of Horror packs seven different side scrollers into a single game. Each level borrows its name from a specific Halloween episode and has its own unique gameplay gimmick. In the first scenario, Bad Dream House, Bart must explore each room of the Simpsons' house, vanquish haunted creatures with his slingshot, leap across sludge pits, and collect enough keys to save the family dog from a demonic broom. Level two, Maggie-Fly, sends you soaring through the air as a fly-mutated Maggie and tasks you to navigate her safely across a bug-infested kitchen. Things really heat up in level three, Plan 9 from Outer Springfield, a top-down shoot-'em-up starring family mom, Marge Simpson. Presented in a style reminiscent of Konami's Zombies Ate My Neighbors, Marge is a bubble-blaster-packing zombie hunter who'll have to get through hordes of possessed Springfield denizens and zombie versions of Apu, Moe, Mayor Quimby, and Krusty if she wants to make it home safely. Later levels cast Homer as a vampire hunter in a Castlevania-style mansion romp, a Homer robot as a toxic-waste purifier with a heart, Lisa as a Solid Snake-inspired operative in a stealthy school rescue, and the apelike King Homer in a Rampage-style wrecking frenzy.

Each level in The Simpsons: Night of the Living Tree House of Horror is a game unto itself, which makes for a rather pleasing and varied experience. Surprisingly, though, each scenario is also a nice example of the particular genre it lampoons. Bart's initial jump-happy scenario lends a nod to Nintendo's Super Mario Bros., while other levels pay glowing tribute to Sega, Konami, and Atari releases such as Kolibri, Castlevania, Metal Gear Solid, Zombies Ate My Neighbors, and Rampage. The game is not entirely free of flaws, however. The game uses an unwieldy password system, making it unnecessarily tedious to continue a game. The game itself is incredibly short and can be completed in less than three hours. Also, nonhuman enemy sprites are limited to poorly animated spiders and bees, which makes them jarringly out of place when compared with the rest of the game's sprites.

Despite a few ugly spiders, the majority of the action in The Simpsons: Night of the Living Tree House of Horror is colorfully drawn, highly detailed, and smoothly animated. Bart, Maggie, Lisa, and the rest of the family all have their own trademark body characteristics, as well as at-rest animations that include Bart's patent shrug and Maggie's clumsy pacifier drop. The rest of the Springfield menagerie is present as well. Apu Nahasapeemapetilon, Monty Burns, Waylon Smithers, Groundskeeper Willy, Principal Skinner, and a whole host of recognizable characters gives the game the kind of satisfaction that only familiarity with a phenomenon can offer. The Simpsons' house, the Burns' mansion, and the Springfield streets are also re-created as well as can be expected on a 3-inch color screen.

Don't let the standard GBC MIDI fool you either--this Simpsons game sounds good too. Although there aren't any Bart speech samples or Homerisms, Night of the Living Tree House of Horror is deep with a wide array of series-inspired sound effects and music. It's no Mario Advance, but Simpsons fans will smirk with glee when hearing the Simpsons theme twisted asunder in a dark horror re-creation of itself.

Re-creation is exactly what The Simpsons: Night of the Living Tree House of Horror is all about. No matter how you pronounce it, THQ has managed to re-create a decade of Halloween specials into a single GBC game that's bound to give series fans hours of recreation. 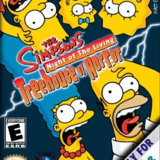 The Simpsons: Night of the Living Treehouse of Horror
Follow