It might be short, but there's some solid fun to be had in this family-friendly Move shooter.

In The Shoot, your targets may look like cowboys, robots, or zombies, but they're actually just thin wooden cutouts populating a film set. The gameplay in this arcade shooter is similarly two-dimensional, offering up some interesting Move-controlled shooting without much depth. But just because it's shallow doesn't mean it's not fun. The Shoot is an entertaining but short-lived romp that makes good use of the PlayStation 3's motion-sensitive add-on, and its simple mechanics and violence-lite approach to blasting bad guys makes it accessible for gamers of any age.

Instead of playing as the gruff hero stereotype you'd find in most action games, you play as an actor pretending to be a gruff hero stereotype on a film set. You have to blast your way through five movies, each from a different genre. There's a Western, a sci-fi flick, a campy horror movie, and more. No matter what the genre, the task is still the same--shoot at (mostly) anything that moves. While firing on thin pieces of wood and cardboard doesn't have the same visceral impact as shooting at "real" characters, the game's behind-the-scenes movie setting gives it a unique, distinct feel from other shooters. Wires that guide flying characters are clearly visible, shot opponents break up into chunky splinters, metal frames that hold up cutouts are exposed if you shoot off a torso--all these touches give The Shoot a kooky charm. Its blood and gore-less approach to blasting enemies also makes it a safe choice for some family-friendly fun.

That family-friendly focus extends into gameplay. Your character doesn't actually take damage or lose lives in The Shoot; rather, your success is determined by an off-screen director. If you shoot well and rack up combos, the director's happiness gauge will stay full. If you get hit or shoot civilian cutout targets, however, his meter drops. If it drops to zero, then you'll use up a "take," and you only have a few of these takes available to make it through any one level. Limited takes aren't really an issue, though, with the game being a breeze to complete. Most of the enemies that populate The Shoot won't even try to hurt you if they're not shot, and the ones that do attack usually only do so after a generous amount of time, giving you plenty of opportunity to gun them down. And even if the director's meter does fall, racking up subsequent combos will eventually refill it.

The real challenge in The Shoot lies in racking up combos where you continually hit targets without missing. It's good fun to try to maintain accuracy whilst shooting at the many enemies that clog up the screen at once, and there's a good variety of foes on show with specific weak points that add to the challenge. Vampires, for example, are only vulnerable around their heart, while bats are fast-moving, small targets that are difficult to hit. Robots and zombies normally take two shots to bring down, but if you score a headshot, they crumple in one. Building up combos also opens up special abilities that can be used in battle; showtime slows everything down onscreen and is triggered by spinning your body around on the spot (or swinging the Move in a wide circle above your head); shockwave destroys everything onscreen and can be performed by pointing the Move down and shooting; and rampage turns your weapon into a fast-firing machine gun and is deployed by pointing the Move controller up. Using these power-ups makes an already easy game even easier, and having to spin around to deploy showtime is much more annoying than it is fun.

The Shoot caters for gamers of all experience levels because its simple point-and-shoot mechanics are handled well using the Move controller. Sony's motion-sensing, glowing light stick is more than an apt substitute for a light gun and is accurate and responsive enough to allow for a high degree of precision. The only times the Move proves to be finicky is with some of the advanced techniques available in The Shoot. Pointing the Move offscreen to the left or right allows you to dodge enemy attacks, while pushing the controller down behind certain objects will let you take cover. Sometimes, the Move confuses commands, ducking behind cover instead of setting off shockwave, for example, or responding late to a dodge command. They're minor quibbles, however, in an otherwise solid shooting package.

The Shoot's solid presentation adds a lot to its appeal. While the cutouts in the game aren't animated for the most past, there's a good variety of them to be found, from jetpack-wielding mobsters and deep sea sharks to long-johns-wearing cowboys and zombie cheerleaders. The dialogue is dreadfully repetitive, though: The director guiding you through each movie set will repeat the same lines ad nauseam, so much so that it's preferable to turn the dialogue off and just listen to the game's movie-genre appropriate soundtrack (which includes a few enjoyable tunes).

The biggest issue with The Shoot lies in its length. With each of the five movie sets taking only about 20 minutes each to play through, the game can be done and dusted in less than two hours. A two-player mode adds some length to the proceedings, although trying to rack up multipliers means you'll have to coordinate very closely with your partner to make sure you're not shooting at the same targets. The Shoot also has an extra challenge mode that can be unlocked after discovering poster pieces hidden within each movie. These challenges--one has you hitting moving targets with each miss costing you a "life," for example--are the toughest things you'll find in The Shoot and are well worth digging up for those eager to test their skills. For everyone else, The Shoot presents a few hours of good fun, but there's no need to see the movies on show here more than a few times. 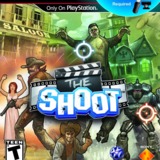