Bill Murray's character in Groundhog Day believed he was in hell, but let's admit it: There are worse possible time loops to get ensnared in than having to spend your days reporting on rodent shadows and courting 1990s Andie MacDowell. In fact, consider The Sexy Brutale: you could end up reliving a single day at a fancy, sprawling casino mansion where you're attempting to save the lives of nine guests who get slaughtered by the staff during an annual masquerade ball.

Worse, you can only save one or two at a time. So during one day in the time-loop you might thwart the death of one guest, but when you try to save another the next day, the guest you saved "yesterday" dies gruesomely once more. That's The Sexy Brutale for you—a sad, attractive adventure combining time travel elements of Majora's Mask with the murder-solving antics of Clue and the sensibilities of Edward Gorey. Its elements usually work well enough that it lingers in memory long after its brief eight-hour run time draws to a close.

The time loop is far from the only supernatural business afoot in The Sexy Brutale, as the early sight of a woman emerging from a pool of blood to chat might tip you off. After giving you a magic mask, she also hands over a pocketwatch that lets you rewind time throughout the day. This allows you to save lives by memorizing each guest's schedule and movements, and attempting to remove the objects that eventually lead to their demise. (Later, you can reset the time loop to start from any clock in the mansion.) To take the earliest, simplest such puzzle, you save your first life by replacing the live cartridge in a rifle with a blank.

The grateful guest then takes off his or her mask--this is a masquerade, after all--and transfers its power to you, unlocking new skills, such as the ability to hear distant conversations or shatter glass with your voice. The next day, it starts all over, but with new tools in your possession that help you save a new guest and unlock new wings of the sprawling manse.

The catch? You can't let any of the other guests or staff see you. Should they do so, time screeches to a halt, the lights dim, and the mask of the observer floats across the room to attack. Much of the action thus consists of peeping through keyholes for signs of life or listening for sounds from surrounding rooms. The Sexy Brutale can be rewarding when your observation skills and timing help save a life, but it's not for the impatient. Even when you use your pocketwatch to rewind time, all the items you picked up along the way return to their original places. It's mildly frustrating when first figuring out the niceties of the time controls. Once you understand how everything works, however, it's possible to fall into a satisfying rhythm. You realize which items to pick up, which doors to go through and when, and when a murderer’s victim will enter the room. Finding that rhythm feels a little like mastering the jumps and related timing of a flawless Mega Man run.

The Sexy Brutale also manages to dull its repetitiveness by making the mansion itself a pleasure to explore.

The murders themselves are never particularly hard to thwart, and you have a handy Marauder's Map of sorts in the vein of Harry Potter that shows the location and movement of every guest in every room (provided he's discovered them). You also retain access passwords, concealed passageways, and other important scraps of information you've found, making the repeat attempts a bit less painful.

Still, a slightly bitter (and perhaps unavoidable) sting of repetition slips in, since the circumstances ensure that you must listen the same conversations over and over again and snatch up the same items. You can jump forward to 4 p.m. or 8 p.m. to skip unnecessary waits, but even so, you'll still end up listening to character belt out the same lines over and over. On the bright side, this repetition is also responsible for the richly tragic aura that blankets the adventures--each day, you must hear again the sound of a distant gunshot or circus music that signifies the death of another guest.

The Sexy Brutale also manages to dull its repetitiveness by making the mansion itself a pleasure to explore. The vibrant art style is partly to thank for that. House guests tromp about like masked bobblehead figures against richly detailed blackjack tables and fireplaces, all of which perfectly complement the mix of sadness and silliness. The constant comings and goings of guests and malevolent staff bring vitality to the game’s stylish mix, as do the strange portraits and macabre fixtures lining the walls. The writing, too, helps in this regard, particularly with the richly descriptive flavor text for items you encounter that further boost the Edgar Allen Poe vibe the game already exudes.

The are times, however, when the game is over reliant on broadcasting its ideas rather than allowing you to experience them in action. The final 40 minutes or so deliver almost nothing in the way of gameplay--instead, it's just you pressing through button prompts as each new text box imparts revelations about the reasons for all this madness from the endgame cast. Suffice it to say that if you weren't a big fan of drawn-out endings you'll probably find yourself shifting uncomfortably in your seat here as well. It's not a bad ending, but the delivery robs it of some of its narrative punch.

There's a lesson in that. The Sexy Brutale's puzzles are fun enough, though they’re never precisely challenging. Instead, the game is likely best understood as an interactive art piece. Seen as such, it succeeds on almost all fronts. There's dramatic tension as you discover each of the gruesome ways your fellow guests meet their end in ever more fascinating wings of the mansion, and there's a dark commentary on the banality of death as you grow accustomed to using the sounds associated with specific murders in distant rooms as a form of a timer. Over and over again, The Sexy Brutale hammers home the brutal truth that you just can't save everyone.

View Comments (15)
Back To Top
8
Great
About GameSpot Reviews 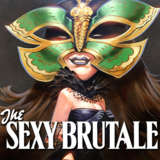 Leif Johnson writes about video games on a remote ranch near the Texas coast. For this purposes of this review, he played The Sexy Brutale for around nine hours. GameSpot was provided with a complimentary download code for the purpose of this review.