The solid roots of a charming series are buried under an avalanche of bugs and other issues.

The Settlers for the Nintendo DS is actually a port of 1996's The Settlers II for the PC, rather than the original Commodore Amiga game. However, this is a blessing because the sequel let players speed up the course of time, rather than suffer through the slogging tempo of the first game. Yet there are few other things to be happy with in The Settlers on the DS. In fact, it's a buggy mess of a port that will send most newcomers to the series screaming all the way back to their local retailer. This is slipshod lip service to series fans who are willing to overlook multiple crazy issues in favor of a nostalgic trip down memory lane. But even if you're one of those folks, you're better off with your memories, rather than soiling them with this lazy port of a solid game.

The Settlers is an economy-focused strategy game. Your goal is to expand your nation by taking advantage of resource nodes and building a logical system of structures and transportation. To do so, you plant flags and build roads between them, setting up a tag-team system in which residents carry resources from one flag to the next. It can get remarkably complex, considering that keeping your populace happy and healthy requires a web of roads and buildings to process all of the raw goods into something useful. You also need to carefully prioritize what types of goods get transport priority. There are military aspects, but they are secondary, and generally involve tapping on a few buildings and letting things work themselves out.

If you're new to the series, the unusual web of flags and roads will be confusing at first. There is no in-game tutorial, and the manual is simply abysmal. Consequently, if you don't know how to play The Settlers going in, you'll need to rely on trial and error until you get things figured out. Even once you get the basics down pat, you'll have to fiddle around with resource-distribution priorities, structure placement, and more in order to avoid traffic jams and other issues.

If you aren't so new to the series, the DS port isn't going to do you any favors, either. The DS menu interface is fine; it lets you flip the top and bottom screens at will to access distribution graphs and system messages. But the touch-screen icons are amazingly imprecise, often not registering taps, and the scrolling speed is sluggish. However, the worst part is the barrage of bugs you will have to endure. If you zoom in or out, you risk crashing the game and losing progress. One mission was impossible to complete until we turned off the sound effects, and we were never able to complete a later one, which left us stranded in the middle of the Roman campaign.

These awful moments are commonplace, so it's hard to say how the game made it past the testing phase. It's too bad, because when things are moving at the proper gear, The Settlers is a charming and addictive experience. Watching your workers go about their chores can be a delight, and a variety of cute animations makes it fun to watch them at rest, too. This isn't a technical powerhouse, but the visuals and little midi tunes are identical to the original Settlers II, and they get the job done just fine.

If you haven't played a Settlers game, steer clear of the DS release. It's far too frustrating to deliver much enjoyment. If you're a fan, there are enough Settlers games that you don't need to worry yourself with this one. It just seems as if things were slapped together with as little work as possible. When it functions, The Settlers can be laid-back fun. But given that you never know how far you're going to get before the next crash, why bother with such a pricey gamble? 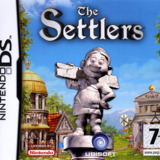