It's a lot of fun to paint the town red in this black and white open-world game, but the weak stealth elements limit your options.

Sean Devlin is one tough Irishman. A single Nazi bullet may have ended the life of his best friend, but the protagonist of The Saboteur isn't going to succumb to death's waiting embrace nearly as easily. He absorbs rounds of German artillery like a plant sucks in sunlight, exhibiting an uncanny ability to regenerate his health in a way that would make even Wolverine envious. Despite the 1940s trappings--the dreary setting, old-fashioned weaponry, and painfully familiar foe--The Saboteur has very little in common with World War II. The strange thing is, once you get over the obvious clash between the real war and this over-the-top portrayal, The Saboteur is a really good time. It may not make a lick of sense that you can single-handedly shoot your way through a burning zeppelin, or dispose of waves of angry Germans with careless ease, but it's so much fun that the ridiculousness of these situations only adds to the enjoyment. If you can get over a few rough spots and put your real-world knowledge of World War II to the side for a while, The Saboteur is a goofy reenactment of some of history’s darkest days.

It's a shame the story doesn't mirror the devil-may-care nature of the action. The cutscenes drip with drama, documenting the terror the Nazis are exerting on Paris. Sean Devlin has a score to settle with the invading army. Sure, the city he calls home is occupied by aggressive forces, but his beef is much more personal than that. His best friend was killed, murdered before his eyes, by a high-ranking Nazi with no moral qualms holding him back from committing unmitigated atrocities. Each new cutscene brings with it dark news from the war front, adding fire to Sean's quest for vengeance. Taken by itself, the story is well done, despite some visual discrepancies during the cutscenes. However, the overly dramatic tale serves to further highlight the jarring disconnect between the ridiculous action and the depressing reality. Unfortunately, even though the story goes out of its way to put a damper on the fun of rebellion carnage, it can't even keep a straight face long enough for you to care about the horrific events being told. The characters act in predictably stereotypical ways, which makes it difficult to confuse them with real human beings. Sean Devlin may be upset when his best friend is killed before his eyes, but after making his 10th whiskey crack in just a few sentences, he becomes an Irish caricature.

The story may not be able to decide if it wants to be goofy or serious, but the intriguing atmosphere definitely adds to the experience. The depression and fear cast on the city by the occupying forces are expressed visually through striking black and white backdrops. The buildings and roads in the Nazi-controlled sections of the city have a bleak, suffocating feel, making your actions to free these areas carry more weight. The most interesting aspect of this art design is the way in which color is carefully placed. During cutscenes, a scarf on the person Sean is speaking to may be drenched in shocking blue, standing out brilliantly against the dire background. Action scenes are even more impressive, using the orange flash of a gunshot or the glowing red of spilled Nazi blood to create a dazzling look. When you finally kick those evil Nazis out of parts of the city, the color comes flooding back, giving you a visual reward for your hard-fought progress. Ironically, the colored sections don't look nearly as impressive as the black and white areas, although the pristine countryside is a pleasure to take a leisurely drive through. Just make sure you don't hit any cows. They explode as if filled with dynamite, which could ruin your mood.

The Saboteur is an open-world game that lets you roam the streets of Paris at whatever pace you desire. The city is comfortably European, and does a good job of capturing wartime Paris. The world-famous landmarks are intact so you can visit the Arc de Triomphe or the Eiffel Tower when you need a break from the Nazi-killing action. Your main method of travel, when you aren't running wildly down the somber streets, is a variety of cars pulled straight from the dawn of the automobile. They certainly blend in with the 1940s aesthetics, but their handling leaves a lot to be desired. They feel every bit as old as they look, which makes it difficult to quickly wind your way through these narrow streets or pull off a smooth hairpin turn during the many chase scenes. That isn't to say the vehicle controls are broken; they're just stiff, which makes the cars less fun to drive than they could be. You can also get around town by climbing straight up the sides of buildings. However, although this gives you a unique view of the City of Lights, it's clunky and unsatisfying. Getting to the top only requires you to rapidly mash on the climb button, and it takes an awful long time to finally reach your destination. Thankfully, this is a mostly optional way to travel, so you can ignore it if the sluggish nature gets to you.

As you progress through the game, you meet up with a variety of contacts from various resistance organizations. These rebellion leaders give you different objectives to take part in that not only get you closer to fulfilling your vengeance, but help to kick out the Nazi occupants as well. Your goals take many different forms, but they usually boil down to two distinct operations--kill a specific Nazi or destroy a valuable tool of tyranny. Regardless of what your ultimate goal is, The Saboteur is filled with lots of explosive action. Wave after wave of angry Nazis will attempt to stop you dead in your tracks, but you can withstand so many bullets and your health regenerates so quickly that it's only a matter of time before all of your enemies are lying motionless at your feet. Because you are so powerful, the game is frequently easy, letting you lay waste to everything that moves without much fear of losing your own life. As you get deeper into the game, the enemies become more powerful, requiring you to use a more thoughtful approach to dispatch them. Although it never becomes too difficult, the shooting stays fun and exciting throughout, serving as the driving force behind your adventure.

It's a good thing shooting up Nazis is so fun, because the stealth elements are not developed nearly enough. You can steal the uniform off the back of a defeated soldier, allowing you to blend in with your oppressors, but it's almost impossible to stay undetected for the duration of a mission. Your cover will invariably be blown at some point in the operation, forcing you to ditch the quiet approach and go out with guns blazing. It's still worth scouting buildings beforehand to discover the easiest way in and at least attempt to blend in with the crowd for a little while, so you can limit the number of Nazis you have to face, but it's disappointing that playing this game as a stealthy saboteur is not a legitimate option. Furthermore, unarmed combat, a necessary tactic if you wish to complete missions quietly, is sloppily executed. You cannot lock on to your enemies, which makes it way too easy to miss them with a punch, and the haymakers and kicks lack impact. It's much easier to ditch the disguise and whip out your pistols than have to deal with the lousy brawling mechanics.

Aside from the main missions, there aren't a lot of different activities to take part in. There is a Duck Hunt-inspired minigame that will struggle to hold your attention even the first time you play it, and there are a few different races that are fun only if you can come to grips with the vehicle controls. You can also sign up for a number of optional quests from your rebellion contacts, but these missions are very similar to the story missions. Your best chance at finding some fun variety are the freeplay targets. The Nazis have a number of valuable supplies scattered all over the city, and you make extra money for taking these out. Some of these objects, such as barrels of oil, can be destroyed by shooting them with an automatic a few times, but most of the targets are large and heavily shielded, forcing you to plant dynamite at their base. Wiring an explosive and then sprinting away before you get caught in the blast is a lot of fun, and seeing the angry Nazis investigate the charred remains of their precious war machines is quite rewarding.

Throughout your quest to free Paris from Nazi rule, you can earn a number of perks that make overthrowing the occupying forces easier and more fun. For instance, stealing a certain number of civilian cars lets you call for your own getaway mobile whenever you're in a pinch, sniping a few Nazis from far away steadies your aiming sights, and you can earn all sorts of fancy guns by dispatching Germans in clever ways. The perks system is a great incentive to try different methods to complete your objectives and builds upon the foundation that makes the game so much fun. The action in The Saboteur is well executed and rewarding, so even though World War II is merely a backdrop and the stealth elements are underdeveloped, it's still a blast to spill gallons of Nazi blood and blow targets sky-high. The Saboteur may not be the most original sandbox game around, but it certainly stands out from the glut of other World War II-themed adventures, and it's a darn good time as long as you can put up with its minor problems. 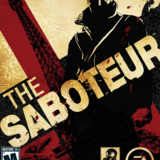 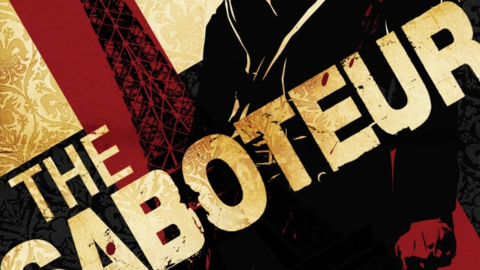 Take on the role of a subversive saboteur and thwart the machinations of your foes.